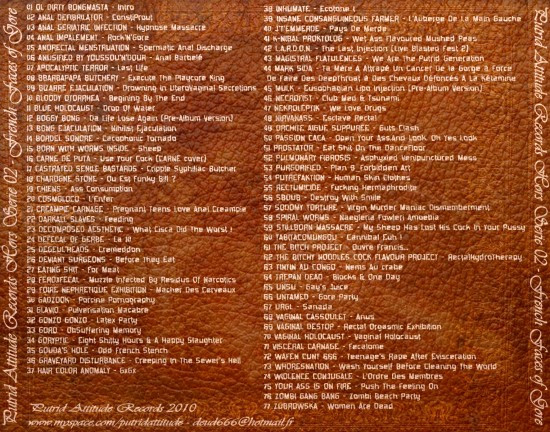 But what this dude did yesterday is way over the top, not just in terms of effort, but in terms of quality. What he did can only be described as a labor of love — for the most extreme forms of extreme metal — and what’s more remarkable is that he did it even though he isn’t even a fan of the sub-genre he wrote about. He paid homage to effort, through his own effort. And we ain’t gonna let that pass by unnoticed. What the fuck are we talking about? Please stay with us after the jump, and all will be explained . . . (plus we have some songs for you to stream) 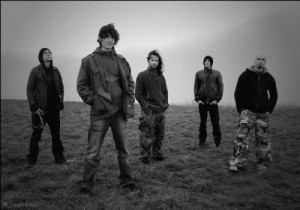 If you really want to start at the beginning, this mini-saga began with Eryn Non Dae, a superb French metal band we wrote about and interviewed back in January.  As part of our interview, we asked END’s bass player Mika André if he would recommend some other French bands we might not have heard about, and one he recommended was Zubrowska.

So, we listened to Zubrowksa, we thought their music was very cool, and we said so. Months passed, and then we learned from Zubrowska about a compilation album that had been assembled by a French label called Putrid Attitude (which included a Zubrowska song). But this wasn’t just any compilation. It included 77 songs.

Let’s repeat that, in case you thought it was a typo: 77 songs. By 77 bands. WIth names like Anorectal Menstruation, Bong Ejaculation, Magistral Flatulences, Vaginal Holocaust, and Your Ass Is On Fire.

And, of course, these aren’t just any 77 songs, but 77 songs described by the label as “The Audiophonic Evil Encyclopediae of French GoreGrind Sadistic Cannibals Brutal Death Maniac Butchers, and Grindcore Serial Killers.” Putrid Attitude made the whole ghastly comp available for free download.

We mentioned this in one of our posts mainly because Zubrowska had a track on the comp, but also because we were just so impressed by the sheer fucking accomplishment of assembling music from 77 bat-shit grind bands. We also downloaded the whole frightening comp — but we didn’t have the balls to actually wade through it from start to finish.

Enter Elvis Shot JFK. He did what we didn’t do. He made it through the whole comp — and then he wrote a brilliant review in the form of an extended comment on our post. And with that extremely long-winded intro, here it is (and if you’re tempted by ESJFK’s review, you can download the comp yourselves at this location). We’ve added streaming links for some of the songs featured in the review.

As I mentioned before, the production quality varies from song to song (to be expected) and they don’t all use the same bitrate (not a deal breaker). Unfortunately, some of the songs aren’t nearly as loud as the others, so if you’re listening through from beginning to end, keep that in mind, especially if you’re pushing the volume up to hear the quieter songs – even more so if listening through headphones or ear buds. Given the length of most of these, you may find yourself aurally assaulted after a minute or two because the next song is louder by default.

Quite a few of the songs are fairly straight forward as far as metal goes, while several include sound clips, electronic elements, hip-hop and even some sorta trippy stuff that sounds a bit awkward combined with the other stuff under it. There’s more to be found, but I’ve had a hard time making it through uninterrupted – not that I haven’t tried. I wouldn’t say they’re all goregrind-y songs (Zubrowska’s contribution at the end comes to mind, plus a couple of those that I’ve picked as highlights below), but the bulk of the material is what you might expect with a compilation like this. Lots of gurgly and/or pig squeal vocals, and some that make such vocal stylings seem operatic by comparison. And that’s putting it nicely. Oh, Kenny (from South Park) seemingly makes an appearance in Zombi Gang Bang’s contribution around 0:23 to 0:29 or so.

I’m surprised there isn’t a song about jerking off an elephant in here (at least, I don’t think so), but I’m sure some band somewhere has done one. “Pachydermal Happy Ending”, anyone? Then again, there are two songs that reference sheep, at least as far as the song titles go, so there’s that. I advise that you try not to think too much about some of the other titles, otherwise you may need to scrub your brain with some steel wool, preferably not from one of the sheep defiled in this compilation.

Since I’m not a huge fan of the genre, only a few caught my attention as being something I might actually find enjoyable in my usual musical listening habits, while a few others could join them if they had better production or the vocals were closer to being something comprehensible – or at least if I could tell that there were separate words and not a stretch of noise with some fluctuation to it. Then again, maybe it’s better than I don’t know what the vocalist is singing saying doing, just as with some death metal or black metal – some lyrical subjects, I’d rather not be listening to.

To wrap up, here are a few that I found to be highlights, at least according to my tastes, listening habits and what I’ve been exposed to so far. Not all top notch songs, but in my opinion they’re still better than the rest – no offense to the other guys. I’m not going to single anyone out on the other end; I’ll play nice since this isn’t my usual breed of music.

In no particular order…

And some comments on a few of the others I liked…

Wiolence Conjugale – “L’Ordre Des Membres” is one of the more interesting tracks, combining drum beats, strings and goregrind vocals. And it actually works out surprisingly well. With a different vocal approach – even just moving a bit closer towards lyrical comprehension – and this song could have stolen the show. Of course, it’s not a brutal track, so others may end up hating it for breaking away from the norm. This is the song I’ve listened to more often than any of the others. For me, it may be the best track here.

Prostrator – “Eat Shit On The Dancefloor” is one of flavored with some cheesy sounding keyboard effects, but they don’t dominate the song, unlike a few of the others. There’s a strong punk-ish feel to the song and they use more than one vocal approach, including stuff that you can probably understand if you pay attention to the song (although it’s hard to mistake the “eat shit” that repeats several times in between the rest of the lines).

Protrator: Eat Shit On The Dancefloor

Your Ass Is On Fire – “Push The Feeling On” is another song that sounds a bit different, and I’m not sure how to describe it. It goes through a few different sounds over the course of just over 2 minutes and is one of those tracks that’s probably out of place with the majority of the offerings on this comp, especially with its Europop beginning. Worth checking out, at least once.

Your Ass Is On Fire: Push the Feeling On

P.S. Among many things we liked about this comment was the obscure reference to jerking off an elephant — which was the subject of one of our prouder moments in bloggerdom, but which we doubt anyone by ESJFK ever read.