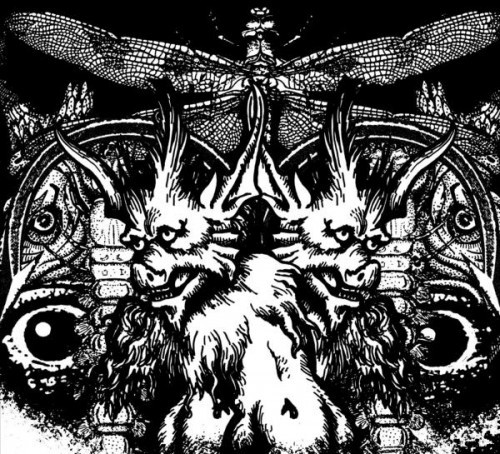 Random Metalhead Outside a Club (“RM”):  Yeah, help yourself.

Me:  Thanks man.  (firing up a coffin nail) So, what did you think of that last band, Early Graves?

Me:  Exactly!  It was like bein’ hit by a big fuckin’ truck, wakin’ up with tread marks embedded in your face.

RM:  Fuck yeah! That was some amazingly heavy shit. What the fuck were they playin’?

Me: All those songs were from their new album, Goner.

RM:  Good name for this kind of music, that’s for sure. It’s just, raw, eye-gouging, fuck-it-all shit. It’s like punk rock except with the heaviness dialed into the red zone.

Me: Yeah, I’m with you on that. Kinda reminded me of early Entombed, except faster, Entombed on a grindcore binge. Definitely heavy. That fuzzed-out bass is really up-front in the sound, and the fucking drummer just crushes his shit, absolutely fuckin’ berserk. But you’re right about the punk rock thing. It’s definitely got those punk rhythms and pacing.

RM:  But, you know, it wasn’t all just non-stop scorching. There was that one song that just started grinding down into a sludgy, crusty rhythm. That shit reminded me of this sweet car I used to have, the day the fucking engine just seized up on me. Sounded like the whole fuckin’ thing was coming apart and then it just stopped. Gaskets were just corroded to shit. I had to rebuild the motherfucker with money I didn’t have. 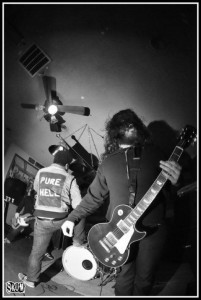 Me: Sucks, man. Yeah, that song was called “Mayday”. And right after they hit that slower, sledgehammer chugging part, they just let the guitar feedback finish the song for about a minute and a half. I thought my head was gonna explode. And fuck, the song right after that, the one called “Wraiths”? That was some more down-tempo, headbanging sludginess. Made me think of a shit-faced NFL lineman staggering through a packed club lookin’ for the fuckin’ bathroom.

RM: Yeah, like an NFL lineman would really come to a club like this — not nearly enough hot babes on display. But I know what you mean. Just kind of unstoppable, like some bruiser wading through a buncha metalhead geeks like us. But most of that shit was fast and out of control. That fuckin’ vocalist, you know his name?

Me: Dude’s name is Makh Daniels.

RM: Well, was he fuckin’ sick or what? I thought HIS head was gonna explode. Sounded like a dude who was bein’ burned alive and everyone was tryin’ to put out the fire with buckets of gasoline.

Me: No shit. Dude had amazing energy, just mauled with that voice of his. Fuck, my cigarette’s out. Can I borrow your lighter again?

RM: Yeah, here ya go. You know, I read someplace that the feds made all the cigarette companies use some kinda new papers that make the things go out if you’re not draggin’ on ’em. Supposed to cut down on fires when people go to sleep with their butts still smokin’. Probably some kinda chemicals in there that will give you cancer faster. 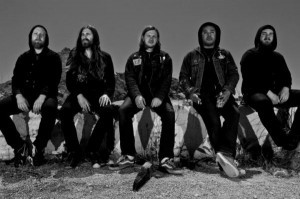 Me: Hey, don’t use the C word. Gives me the cold shivers. I’ve been smoking since I was 16. But yeah, if I talk too much, like I’m doin’ now, the fucking cigarettes do go out. What did you think about the guitars?

RM: I thought those two guitarists were hot-shit. Slammin’ riffs and squeals and lots of feedback. A couple of good solos too. Sounded like someone shooting acid in your face out of a garden hose.

Me: No shit. The solos really weren’t very long, but man they really burned. They had some good chainsaw chugging goin’ on, too, in a couple of those songs, like that one called “Trauma”. Dudes are really on top of their game.

RM: Totally. I just thought the whole thing was heavy as fuck. I really got off on it. Hey, it sounds like the next band is starting. I’m gonna go back inside and get a beer.

Me: Alright man. Hey, thanks for shootin’ the shit with me, and for the lights. I forgot which band is next, but they got a tough act to follow.

RM: That they do, that they do. You know, your fuckin’ smoke went out again. 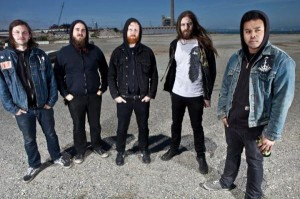 Okay, so that really wasn’t a transcript. I just thought I’d try a new way to write a review, and this particular album just cried out for the use of lots of four-letter words. There’s nothing subtle about Goner. It’s just a sonic steamroller. Trying to get all literate and intellectual about it would just degrade the music. Goner is a rough, raw, brutalizing assault, and it’s brilliant from beginning to end.

To be clear, I’ve never seen Early Graves play live. But I’m going to fix that. They’ll be on tour from now through early August with another hot-shit band from the Bay Area, The Funeral Pyre (we wrote about their new album here) — and that tour has a scheduled stop in Seattle. You can check out all the dates and places at the Early Graves MySpace page.  They’ve got the title track from Goner streaming there, too. Here’s another one for you to check out:

P.S.: The online version of DECIBEL has just put up an interview with Early Graves guitarist Chris Brock, along with another track from Goner to hear. Check it out at this location.