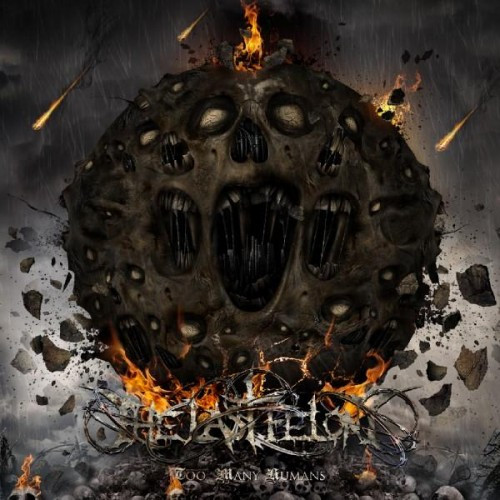 We were big fans of the 2008 debut album from Montreal’s The Last Felony (called Aeon of Suffering). It was a brain-coring mash-up of technical death metal, deathcore, and hardcore styles, slightly blackened,  that we found ourselves coming back to whenever we wanted to just rock the fuck out.

We’re now greedily anticipating the August 17 release (in North America) of the band’s second effort, Too Many Humans, on Lifeforce Records. The album art up above would have warranted a test drive in our “Eye-Catchers” series, except we already knew about the band and its music, and the album title sits well with us, too. We pretty much have that thought on a daily basis, when we personally encounter or read about, uh, assholes. Just too damned many humans, and not enough emu’s.

Wholly apart from the strength of the band’s debut album, we’re psyched about the new one because of a few tastes of what’s to come. Three tastes, to be precise — and we’ll serve them up for you like delectable amuse-bouche while you wait for the main offering in August.

First, there’s a promo video for the album. We usually don’t even watch these things because so little effort goes into most of them — but this one is really well done.

Second, there’s a song from the new album (“Quandary”) that was included on the free compilation available for download from the Canadian label/distributor Sonic Unyon (the subject of a post you can find here).

And third, there’s another song from the new album that the band has recently put up for streaming, with the truly inspired title “We Are Future Housing Developements For Maggots”.

Figuratively wrap your mouth around all three tastes after the jump . . .

First up, here’s the promo video for Too Many Humans, which made its appearance earlier this week:

And now here’s that track from Too Many Humans that was included in the free Sonic Unyon compilation that we told you about a few days ago:

And finally, we suggest for your delectation a second new song from the album — the one called “We Are Future Housing Developements For Maggots”. It’s just been made available for streaming on the band’s MySpace page, along with the title track. If you like what you’ve heard so far, go check it out.

We’re holding our own opinions until we hear the whole album, but you can probably guess which way we’re leaning.

8 Responses to “TOO MANY HUMANS”