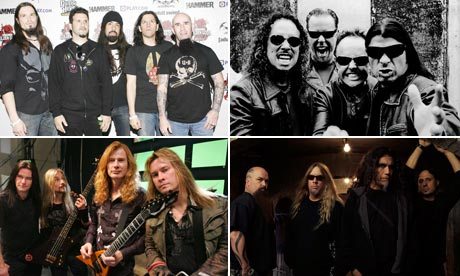 Against my better judgment and most of my principles, two days ago I watched the video of the “Big Four” performing on stage together in Sofia, Bulgaria on June 22. In fairness to me, it’s not like I searched for it. I was just scrolling through the latest drivel on Blabbermouth, looking for the occasional item of interest that does occasionally lurk within the drivel, and there it was. All I had to do was click the “play” button.

Still, I paused.   A long time.   For one thing, although I still like Slayer (and “like” is about all the enthusiasm I can muster), Metallica, Megadeth, and Anthrax have no current relevance to me. The fact that they broke major ground once upon a time doesn’t mean it makes sense for me to listen to their music today, when there are so many other bands I’d rather hear. For another thing, I wasn’t a slobbering fan of most of those bands even when they were current.

And for a final thing, I’ve just grown sick to death of reading about this whole “Big Four” tour. For purposes of this NCS blog, I feel compelled to keep up with current events in metaldom, but to hunt for things that really do interest me, I’ve had to pass through a fecal waterfall of interviews, press releases, and blogger babble about this fucking tour. Enough already!

And for a final, final thing, I knew if I watched the damn video I’d have to see Dave Mustaine.

But I watched it anyway. And as jaded as I am about these bands and this tour, I did get a mild thrill out of seeing all four of them on stage playing together. Certainly not because of the music, because “Am I Evil?” is a forgettable song, and no one in this performance went out of their way to turn it into something better.

That was two days ago. And then yesterday came, and I saw a transcription of an interview Dave Mustaine gave on July 1 in Vienna, and I was vividly reminded all over again why that guy makes me wanna projectile vomit and why I should have passed right over that video without pressing play.    (unfortunately, there’s more after the jump . . .) 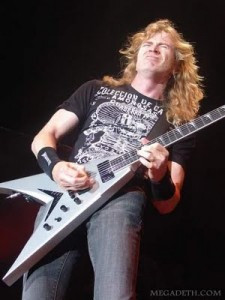 Here are the most grotesque parts of the interview as excerpted by Blabbermouth. Unlike Blabbermouth, I have to add a little commentary, since that’s more sanitary than projectile vomiting.

On whether the “Big Four” tour and the June 22 joint live performance was something special for Mustaine or if it was just “another Megadeth tour”:

Mustaine: “Of course it’s special. It’s historical. It’s life-changing for a lot of people that were there. And I think the bragging rights for people who actually witnessed it versus somebody who saw it on YouTube or saw it in a movie theater or is gonna see it on the DVD that’s coming up… they weren’t there. So to actually watch it was a fantastic thing.”

If you know of a more unadulterated, overweening, bombastically egotistical display of self-love — well, please just keep it to yourself.  A near-death experience or a sex-change operation is “life-changing.” Watching a bunch of aging headbangers blunder through a mediocre song? Not even close. Except in Dave Mustaine’s fantastically self-important mind.

What’s that you say Dave?  You weren’t finished?  Well, pardon me.  Please do continue.

“Standing up on stage where I was, being able to look next to me, on either side being flanked by so much tremendous talent, it was great. It’s just one of those things where in the moment it doesn’t seem as enormous as it really is. After the fact, you look back and you’re like… You know like when you survive a car crash, you don’t think it’s such a big deal until you watch it in slow motion, you’re thinking, ‘Oh, my god, I can’t believe I survived.’ So going up on stage was really, really amazing.” 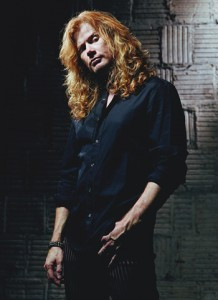 Really? Playing that song as part of the Big Four was like surviving a car crash? In what sense? I mean, I can understand how getting through the video of that song would make a person feel like they’d just survived a car crash. But honestly Dave, I think you were right the first time. It really wasn’t such  big deal — except in your own fantastically self-important mind.

Oops — still not finished?  Well, if you insist.  Please carry on.

“Especially when I looked back and saw how everybody was embracing everyone and how I think that… If you were there, you would have heard when, through all the goodbyes and everything at the end, when James[Hetfield] and I embraced, the whole audience went [wild], ’cause it’s what they’ve been waiting for. It’s what I think James and I both have been waiting for, too, so it’s a good thing.”

Well, you know, I wasn’t there myself. So, you know, I don’t have those bragging rights you were talking about, and like, I couldn’t hear the crowd going wild, just watching it on the little video player like I was doing, so, you know, it wasn’t the fantastic thing it must have been for all those Bulgarians who were really there in the audience, all those people waiting their whole, undoubtedly insignificant lives just to witness that one life-changing embrace by you and that other guy — and I’m sure that other dude knows just how fucking lucky he was to share the stage with you, because, as you say, I’m sure he was just waiting to be taken in your arms like that, just like the audience was waiting to see it, and it must have just been life-changing for all concerned (except for you, because you were the life-changer).

On whether the “Big Four” tour will hit the U.S.:

Mustaine: “That’s up to METALLICA and their camp, because I think it’s fairly obvious, for myself… it doesn’t need to be the ‘Big Four’ for me to wanna play with James and Lars [Ulrich, METALLICA drummer]. I think if the ‘Big Four’ [tour in the U.S.] doesn’t happen, certainly a MEGADETH/METALLICA tour would be great — whether it’s just the two of us or if we have a support group or something like that.

But yeah, I think it was really fun because of what we stand for in heavy metal. Me and James are like the ‘big daddies’ of this whole thing — we were the two guitar players that set the wheels in motion when the first tapes were made of METALLICA. I think it’s exciting now to look back and see all the millions of bands that have been created off what me and James did sitting in a room in Norwalk [California].” 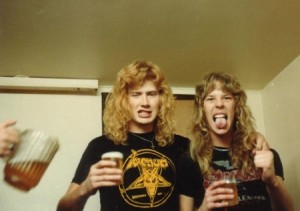 Dave, you really nailed it there. I’m glad someone is finally giving you the credit you deserve, even if it’s you who’s doing it.

Finally, someone who can see the world with clear eyes and recognize that all those “millions” of metal bands out there owe their careers and their music, not to their own drive and creativity, but to you.

Finally, someone who’s honest enough to say what we all know in our heart of hearts, that all those “millions” of metal bands were created off what you accomplished (with a small amount of help from that other dude). All those bands don’t even know how fucking lucky they are that you made their musical lives possible. I’m glad someone finally paid tribute where tribute is due.

So, here’s to you Big Daddy. Have a beer on me.

All done now, Dave?  Yes?  Well, thank god for that. Because if I’d had to read even one more line of this world-class narcissism, I think I would have had an attack of explosive diarrhea concurrently with the projectile vomiting.

I think I first saw the term “Megadick” applied to Mustaine in one of Axl Rosenberg’s posts for MetalSucks about 3 years ago, on the occasion of yet another world-class display of self-congratulation by Big Dave. Axl’s concluding line is just as fitting today as it was then: “Dave, pal, baby: maybe it’s time to shut your big fat fucking mouth and just concentrate on, y’know, the music. Whatta ya say to that?”

Look, we don’t devote much space here at NCS to venting or slagging. When we don’t have something positive to say, we usually just wait until we do. But every now and then, I’ve just got to get something off my chest for fear that if I don’t, it will fester and grow and then erupt out of my abdomen in a great spray of blood like those vicious larval creatures in the Aliens movies. Or something like that.

So, if you think I went a bit overboard today, please forgive me. We’ll be back to more normal fare tomorrow with a new album review. And just to show there’s no hard feelings on my part for those of you who worship the ground Dave Mustaine walks on, here’s the damned video of the “Big Four” in Sofia, for however long this embed code works. As for watching it, let your conscience be your guide.