If you like technically immaculate, headbangingly compulsive, Scandinavian-style melodic death metal played at autobahn speed, stay with us after the jump. Among other things, we’ll stream all four tracks from that EP and we’ll show you how to download a cut from Nothnegal’s forthcoming debut album.

Long-time readers of NCS will know that we’re drawn to bands from countries that aren’t known for their metal scenes. We know how fucking difficult it is to make a career in an extreme metal band anywhere, but it seems to us that in some places, the hurdles must be even higher than in others. 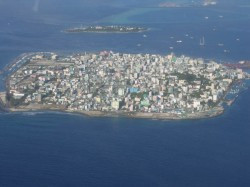 The Republic of the Maldives must be one of those high-hurdle places. It’s an island nation in the Indian Ocean consisting of over 1,000 islets, about 200 of which are inhabited, spread over 90,000 square kilometers of ocean. The most populous of those islets, Malé (pictured to the right), has only about 100,000 people.

By total population, the country is the smallest in Asia, and with an average ground level of about 5 feet (1.5 metres) above sea level, it’s the lowest-lying country on the planet. According to The Font of All Human Knowledge, the highest point of land in the Maldives is only 7′ 7″ (2.3 metres) above sea level — which makes the islands especially vulnerable to tsunamis, and to anything else that causes the ocean to rise.

Rising ocean levels associated with global warming threaten one day to completely submerge the country. In fact, the current national government has set in motion plans to buy land in India, Sri Lanka, and/or Australia as the site for a new homeland. As President Mohamed Nasheed said, “”We do not want to leave the Maldives, but we also do not want to be climate refugees living in tents for decades.” 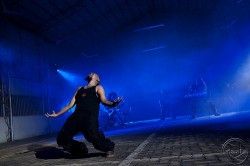 We’ve got an old friend who actually managed to visit the Maldives (it’s a serious hike to get there from the U.S.) and came back raving about its beauty and the friendliness of the people. It certainly seems to be an unusual place in many respects — but we would guess it’s not exactly the best launching pad for an extreme metal band.

Apparently, the band started off as an Arch Enemy and Children of Bodom cover act, and then started creating their own songs, which resulted in the Antidote of Realism EP. That EP featured Risto Ruuth from Finland’s Eternal Tears of Sorrow doing a guitar solo on “Web of Deceit” and the aforementioned Marco Sneck providing keyboards on the EP’s title track. And it was produced by Anssi Kippo, who has previously worked with Children of Bodom and Norther, among others.

You can hear the influence of all those Finns on the EP, with more than a passing resemblance to Children of Bodom. The songs feature supercharged convulsive riffing, blistering guitar solos, merciless blast beats and double-bass fills, and keyboard melodies that alternately arc over the mayhem of the other instruments and join with them in a dizzying race around the track. 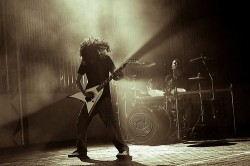 The vocals on the EP add a blackened element to the style by serving up Nordic-style, acid etched viciousness, and the collective result is a powerhouse rampage filled with memorable melodies and deep, rhythmic grooves.

All the technical acrobatics wouldn’t have carried Nothnegal beyond the sinking shores of the Maldives without a talent for harnessing all that technical skill to distinctive songs, but they’ve got that, too. All four songs on Antidote are strong, marred only slightly by abrupt endings on a couple of them, and it’s not all thrash and burn.  There’s an interesting Celtic-influenced folk melody that appears via the keyboards on “Temptress of Shadows” and a repeated refrain of clean singing at the end of “Now I’ve Waken” that’s carried aloft by an anthemic melody that stuck in our heads long after the song ended.

Someone, somewhere, will probably complain that on Antidote, Nothnegal gets carried away with its stylistic homage to Finnish/Swedish MDM, to the point of mimicry. We don’t feel that way, but the band itself may. We saw this on the band’s MySpace blog, commenting on the new album that’s in the works: 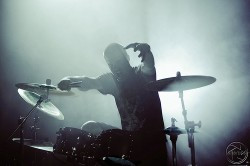 We focused mostly on creating a more unique sound which differentiates us more and the result turned out to be almost something completely different from what we had with “Antidote of Realism EP” but we still managed to keep the melodic keyboard elements intact while getting them to sound darker and [more] epic than before.

We have 9 songs completed for the album and they have some really heavy/thrashy/groovy riffs, with Kevin keeping the  drums aggressive and technical while Marco have the keyboards dark and yet melodic. We are very excited about everything and impressed with outcome of the combined effort from our new lineup and the material we are coming up with this time. The songs contain a little bit of everything from thrash metal, groove metal, death metal to black metal and doom so we believe that the material is quite diverse as well. Apart from that, we have also incorporated some atmospheric ambient sounds/noises in the songs which are unique to the Maldivian environment.

We would have been quite happy with more music like what’s on Antidote, but at the same time we’re interested to see how this band continues to grow. We do have a sign of what’s to come — a single from the forthcoming album that’s available for free download from the band’s official web site. It’s called “Absolute Blood Unification”, and it does reveal some changes in the sound, though we’d call them subtle instead of dramatic. 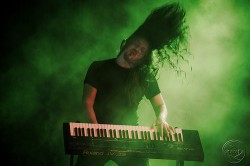 The keyboards are still in evidence and contribute significantly to the song, but they’re less prominent in the mix than on Antidote. There’s still plenty of speed, power, and technical proficiency — and the chorus is just as infectious as the hooks on the EP. Perhaps it has something to do with Kevin Talley’s presence (whose drumwork is as physically jolting as you would expect), but this song reminds us of Dååth — and that ain’t a bad thing at all, in our book.

For comparison purposes, here’s one of the tracks from Antidote of Realism, and then after that you can hear the new song:

And now here’s “Absolute Blood Unification”. If you like what you hear, we’ve put up a link below the player that will allow you to download the song for keeps.

You can download “Absolute Blood Unification” by jumping to this location.

UPDATE: Nothnegal has just created a ReverbNation page, which means we can now grab a widget that should allow you to stream all 4 songs from the EP — which is very cool, because we had a helluva time picking just one for you to hear.  Voila:

As we mentioned earlier, Nothnegal is scheduled to support Arch Enemy on their first-ever performance in the Maldives on July 23, and Kevin Tally and Marco Sneck will be performing for the first time in the band’s lineup for that show.

We also mentioned that Nothnegal will be joining a totally ass-kicking European tour this fall with their new label-mates Rotting Christ, Samael, Metsatöll, and Finntroll. If we weren’t so fucking far away, we’d be there in a heartbeat. Here are the tour dates: