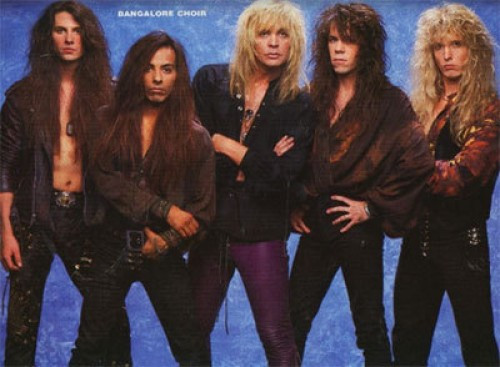 Really, we’re not making this up (and there’s more juice like this to come).  So, to start, everyone out there who remembers Bangalore Choir, raise your hands!  (more after the jump, including a video and a palate cleanser, which you will need if you make it to the end of this filler . . .)

Come on, get your hands up higher, cuz we’re having trouble seeing them! 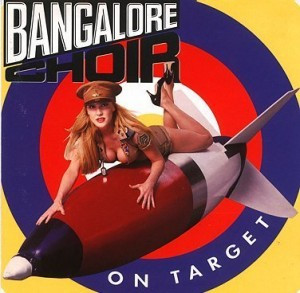 Oh come on, no one remembers Bangalore Choir?  Even with an eye-catching album cover like the one on the right?

Well look, it’s not their fault that you don’t remember them. Who knew Nirvana would release Nevermind on the same day as On Target? Who could compete with that? That’s just some rotten fucking luck.

And what did those cock-sucking label execs know anyway, dropping BC like a steaming turd right after their debut album hit the streets? Just a total lack of vision on their part. They didn’t see the band’s unique look. They couldn’t hear what made the music so strikingly different. They didn’t see the massive money that could be made with advertising tie-ins for hair-care products and treatments for genital herpes.

Wonder what those poor dudes have been doing for the last 18 years?

After several years under the radar on a ranch in Montana, lead vocalist David Reece (ex-ACCEPT, DAREFORCE) was contacted by Escape Records in 2007 to see what the chances would be for him to go to Sweden to sing on Swedish band GYPSY ROSE‘s next release. Soon after that David found himself in the studio for the next year recording and writing for the new GYPSY ROSE CD, “Another World”, which was released in June 2008.

Well, that answers that. The lead singer was in Montana. On a ranch. Under the radar. Sometimes you’ve just gotta get under the radar in Montana to avoid the paparazzi and the legions of fans that just want to invade your privacy and interrupt your creative flow. 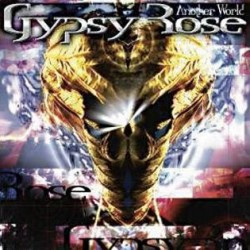 But it was just a matter of time before a label would come calling. So what if it meant going to Sweden? Sweden might have been just what the doctor ordered. I wonder if it caused Reece to regain his passion for music, after all those years on the ranch.  In Montana.  Under the radar.

While touring and doing the Sweden Rock Festival in June 2007 and opening for AEROSMITH in Europe, Reece regained his passion for music, deciding he wanted to put BANGALORE CHOIR back together. Reece reached out to guitarist Curt Mitchell and bassist Danny Greenberg and asked them if they would like to make a new record. Both of them eagerly accepted the challenge.

Challenges are good. And lord knows, trying to resurrect Bangalore Choir is a challenge. Particularly when you’ve been under the radar for 18 years. But all these dudes didn’t just accept the challenge. They accepted it eagerly.  (It appears that original members John Kirk, Ian Mayo, and Jackie Ramos declined offers to join the band again. Man, are they gonna be sorry.) On with the story:

Commented Reece: “We knew if we were to make a new record that in order for it to be viable we had to keep some of the old formula that worked so well in the past which we have done!”

Uh, what? I think Reece needs to re-think his marketing strategy here. Let’s not forget, the “old formula” was the one that got them dropped by their label shortly after release of the first and only Bangalore Choir album 18 years ago. I would suggest re-writing this part of the press release, as follows:

Commented Reece: “We knew if we were to make a new record that in order for it to be viable we had to bury the old formula in a toxic landfill (preferably in Montana), cover it with 100,000 tons of concrete, and then salt the surrounding landscape with plutonium in order to kill off any life forms that might still be tempted to explore the site, which is just what we have done!” 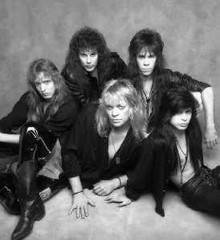 Reece’s comments in the press release continue as follows:

So you can hear the blistering guitars, pounding rhythms, and big, hooky choruses, Bangalore Choir made some song samples from the new album available for streaming, and Blabbermouth is kindly featuring them at this location.

What does the new Bangalore Choir sound like? Astonishingly, it sounds very much like the old Bangalore Choir, as if those 18 years had zipped by like 18 minutes.

What, you may ask, does the old Bangalore Choir sound like? As it happens, we can show you, because back in the day, when MTV played actual music videos, and music videos were tamer things than they are today, Bangalore Choir made one for a song called “Your Love is Like A Loaded Gun”.

I’m not sure what that means. It sounds kind of nasty. But the video isn’t nasty. It’s kind of sweet. And, for what it is, the song is better than about 90% of the hair-metal music that was generated by Bangalore Choir’s contemporaries.

Well, for the one or two of you who actually made it this far in the post, you’ll undoubtedly need a palate cleanser. And after that nice, sweet BC music video, let’s start with some visual palate refreshment: 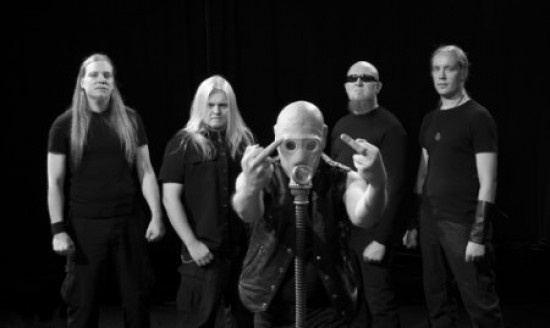 To give credit where credit is due, the same edition of Blabbermouth where we saw the Bangalore Choir blurb also suggested our palate cleanser. It reports that Finnish black-metal band Impaled Nazarene (pictured above) is entering the studio this month to record their 11th album, which will be called Road to the Octagon. It’s scheduled for release in November by Osmose Productions.

It’s been almost 3 years since the last Impaled Nazarene album. We’re ready for a new one. In the meantime, here’s a palate-cleansing song:

Have a nice fucking day.

10 Responses to “BANGALORE CHOIR (plus a palate cleanser)”