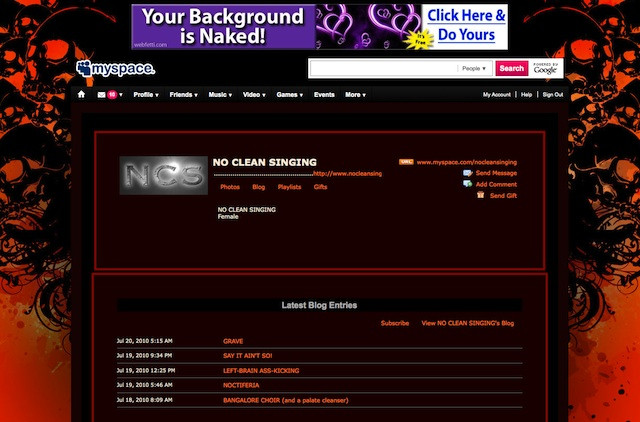 Not long after we launched this site, one of my sometimes collaborators (Alexis) thought it would be a good idea if we set up a MySpace page to increase our visibility (y’know, like from 3 readers up to maybe 5 or 6) and to reduce the opportunities for people to pirate our awesomely ingenious site name for their own nefarious ends (y’know, like using it to sell dick enlargements or herpes treatments).

So she set up a NO CLEAN SINGING page on MySpace. As it turns out, that was a good idea. Now we’re selling our own dick enlargements and herpes treatments.

Just kidding. It really has been beneficial, for reasons I’ll explain. But we’ve also had some unwanted consequences. To be specific, we get e-mails and strange friend requests via MySpace that we could really do without. But it occurred to us recently (as a result of comments following our “Miscellany No. 2” post) that we could have some fun with this shit (after the jump). Who knows, maybe you will have some fun with it too.

(after the jump, things we don’t like, plus a sample MySpace message we recently received, and our proposed response . . .)

But as we said, maybe there’s an opportunity here to turn lemons into lemonade, to make some of the e-mails and friend requests we receive the subject of entertainment. It’s worth a try, right?

So, here’s an actual message we received from an alleged MySpace member, plus our imaginary response. It’s imaginary, because there’s no fucking way we would actually respond to this thing.

Thank you so much for your interest in NO CLEAN SINGING.  You are obviously a person who is a big fan of extreme metal, because only fans of extreme metal would check out our MySpace page and decide to become our MySpace friend and write such a thoughtful personal note to us and share your thoughtful comments about the metal scene and all the rad bands you like. (Do you like the band Vaginal Holocaust? They’re from France.)

I’ve started carrying a copy of your photo in my wallet, in case any dudes wanna see a pic of my girlfriend. I had to write my own note on the back, y’know, pretending to be you, but I don’t really think I’m deceiving anyone, because I just feel like it’s a matter of time before you and I hook up. It’s like an inevitable thing, just destined to happen, like the eventual end of all life on earth.

Jane, I feel like I can confide in you. I’m a very outgoing person, but I’ve become careful about making friends online.  Sometimes, I’ve found that people pretend to be cute brunettes and then it turns out they’re really ugly chicks with facial hair, or that one time when it turned out to be a dude.  I wish I hadn’t taken that long plane trip to Detroit to meet her/him.  Asshole wouldn’t even give me back the check I mailed before finding out she was a dude. Fucking asshole.

But I know you’re not like that because of the photo you sent.  Also, I can tell you’re a really sincere honest person because you said I’m cute. Many people tell me that, but only the really sincere honest people. I did wonder for a moment about how you knew I was cute since there’s no photo of me on MySpace, but I know you must have some way of knowing or you wouldn’t have said that.

Besides, you said we may have spoken online, and you’re absolutely right!  Because I was chatting online just yesterday with a total stranger who said they were a cute brunette!  So that had to be you.  I was waiting to send my check and buy a plane ticket until I got a personal message with a very personal photo meant only for me, and now I have it!

I know we would really hit it off because you obviously really dig extreme metal and I really dig extreme metal.  So we already have a lot in common. We could just play some really killer music together and rock the fuck out, while reading all the awesome things I’ve written for NO CLEAN SINGING.  That would be so cool. (Do you like the band Anorectal Menstruation?  They’re also from France.)

I can tell you’re kind of shy because you’re not looking directly at the camera in that very personal photo you sent, and I think that’s ultra-cool, because aggressive women make me nervous and kinda scared. But you’re obviously a metalhead chick because you have taken such a personal interest in our MySpace page, so you already know that about metalhead dudes.

Please send me your address and personal phone number, but not one that charges my credit card when I call it.  I’m just about maxed out on my card, what with all the interest and late fees and the recurring monthly charges from some online sites I visit late at night, and I want to save some room on the card in case I have to hire a private detective to track down your address and personal details, because I am really, really interested in meeting you in person.

But yes, I will see you soon, very soon, and I will make it a surprise visit.  I bet you like surprises. I’ll just show up at your door in the middle of the night, with some killer metal and some Red Bull and vodka. That will be so cool.

So anyway, yeah, thanks again for your interest in NO CLEAN SINGING.  Can’t wait to chat more, and to see if you’re wearing bikini bottoms that match your top, or any bottoms at all!  😉  Do you have photos of anything below the waist?

P.S. Jane, here’s a photo of me with my last girlfriend, all dressed up to go headbanging at a Bizarre Ejaculation show. They’re from France. They’ve got a great song called “Drowning in Uterovaginal Secretions”. But you probably know about that already. 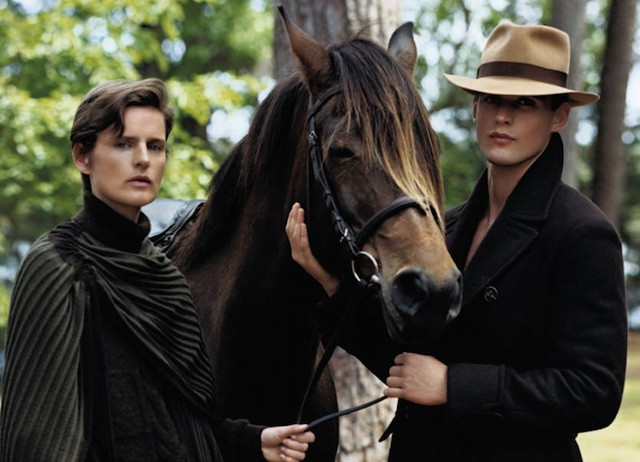 (P.S. to our readers: I haven’t checked out Jane’s web site. I don’t intend to. I suggest you don’t. Vaya con dios.)

(P.P.S. We have more e-mails and MySpace friend requests that would be fodder for more posts like this one.  In fact, a nearly endless supply.)