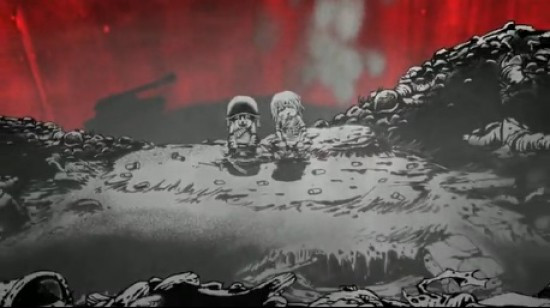 It’s a video for the song “Combat” off the new album Invictus by Heaven Shall Burn (which we reviewed here). “Combat” is about child soldiers, which explains in part why the song is so full of fury. It’s a harrowing, slashing, anguished, bone-rattling piece of music, but it also includes a beautiful keyboard melody and some surprising electro-beats.

The video is an animation created by Animaatiokopla from Finland and was premiered by Amnesty International Germany. It’s visually arresting, and it enhances the emotional power of the song. In carefully selected places, something happens in the video — like the stitching of machine-gun bullets across a muraled wall — that’s in sync with a burst of rhythm or a riff in the song.

But this isn’t one of those videos that’s full of strobing imagery set to the frenetic pulse of the music’s beat. Like the song, it’s about the ripping away of innocence, and in the main, it uses slow-moving childlike graphics to tell the tale as the music scorches with anger. Do check it out (after the jump).