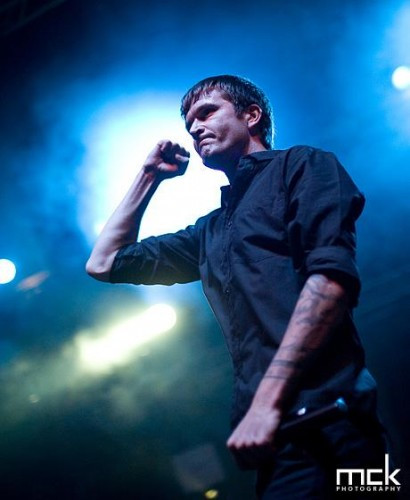 The odds are probably slim that any of you who visit this site have never heard Heaven Shall Burn, and you’ve probably made up your minds already about whether to check out their new album, Invictus. But we’re writing about it anyway because it’s just so damned good that we’d feel guilty if we didn’t.

What has always been distinctive about Heaven Shall Burn’s music is on full display in the new album, except even more so: passionate, politically charged lyrics; a blistering instrumental assault delivered at a furious pace; bludgeoning percussion and headbanging rhythms; irresistible melodic hooks; and Marcus Bischoff’s distinctive, paint-peeling vocals.

Invictus includes a few surprises, too, plus some eye-catching album art. More about the music and the surprises, pictures of the album art, a song to hear, and an unusual video all come your way after the jump . . . .

Invictus takes its name from a poem by an Englishman named William Ernest Henley, who died in 1903.  The poem is reprinted in the album’s CD insert and it features a stanza you’ve probably heard before: “It matters not how strait the gate/How charged with punishments the scroll/I am the master of my fate/I am the captain of my soul.”

Coincidentally, the poem has also found a new audience through Clint Eastwood’s recent movie about Nelson Mandela — who kept a copy of the poem with him on a scrap of paper during his 27 years of imprisonment.  (We mused about that here.)

That poem can be considered an organizing principle for the lyrical themes of songs on this album (the concluding piece of the band’s Iconoclast trilogy), for they tell mainly of people who were victimized and martyred by human cruelty and injustice but who did not surrender their beliefs or their own humanity:

Karl Liebknecht and Rosa Luxemburg, who were tortured and executed following a failed 1919 socialist uprising in Berlin (“I was I Am I Shall Be”), the thousands who were “disappeared” during the brutal reign of Augusto Pinochet in Chile (“Buried in Forgotten Grounds”), the people of Sevastopol who perished in the Crimean War (“Sevastopol”), the fallen on both sides in the battle of Hürtgen Forest during World War II (“Return to Sanity”), Soviet-era dissident Lev Kopalev (“Against Bridge Burners”), the German poet Max Herrmann-Neisse (“Of Forsaken Poets”), and more. 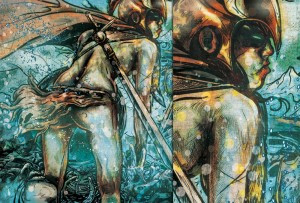 The album stands as a memorial to the fallen, but the only air of lament in the music is to be found in the opening and concluding pieces by Icelandic composer Ólafur Arnalds — melancholy piano instrumentals accompanied by lush strings. In between those bookends, the lyricism gives voice to pain, protest, righteous fury, and revolution — and the music expresses those emotions through an in-your-face explosion of power.

The super-charged pacing is driven by chainsaw riffing, tremolo-picked pulses of melody, Gothenburg-style guitar leads, crushing double-kicks and percussive blasts, and hammering bass-lines — all of it executed with a high level of technical flair and tremendous energy.

A few instrumental surprises salt the music — the tinkling of a piano in the middle and end of “Buried in Forgotten Grounds”, a swirling synthesizer in “Combat”, snatches of electronica in “The Lie You Bleed For”. But for the most part, this is a blending of melodic death metal and hardcore fury that gives no quarter.

As for the vocals, well, no one else sounds quite like Marcus Bischoff.  How he manages to deliver those acidic, abrading vocals over so many years without just obliterating his vocal chords is one of life’s great mysteries. They give these songs their heart and soul — in addition to a healthy injection of blowtorch flame. 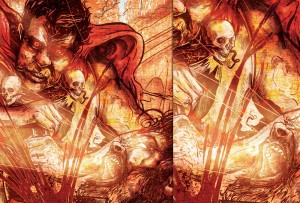 There are two musical surprises on the album. The first is a bonus track that unfortunately appears only on the CD included with the limited-edition box set released in Europe. It’s the band’s cover of a song called “Nowhere” by Irish alt-rockers Therapy?, from their 1994 album, Troublegum. The original is a fucking cool song, and Heaven Shall Burn amps it up in their own unique way without losing the sneering, punk-rock sensibility of the original.

And then, there’s the biggest surprise of all — a duet “Given in Death” by Bischoff and Sabine Weniger from the German rock band Deadlock. Both instrumentally and vocally, this song sounds like a creative DJ’s mash-up of two completely different songs, alternating between Weniger’s upper-range poppy vocals and Bischoff’s face-melting scorchers.

Lyrically, the song is about the embracing of impending death by someone who is more than ready to leave behind the tortures and struggles in this world. Even when we try to put aside our general prejudice against clean singing in extreme metal, we’re having a hard time figuring out how the addition of Weniger’s vocals and the instrumentation accompanying them helps realize what this song is about. 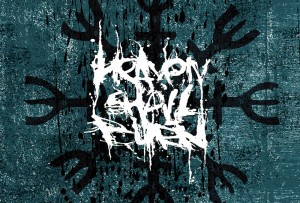 In the context of this album as a whole, that’s a minor quibble. On the whole, we think this album is really hot shit.

We were so excited about its impending release that we shelled out for the European boxed set, which includes a bunch of extra goodies, including alternate album art on the digipak, that bonus track we mentioned earlier, and a DVD of a live performance in Vienna.  We’ve been featuring the awesome album art (by Joshua Andrew Belanger) throughout this post.

So, here’s a track to stream from Invictus:

And, as we promised, here’s a video, taken from the live performance DVD that’s included with the limited European release. We said it was unusual, and you’ll see why. And if you happen never to have seen Heaven Shall Burn, don’t worry: they don’t usually perform while dressed as Roman legionnaires.