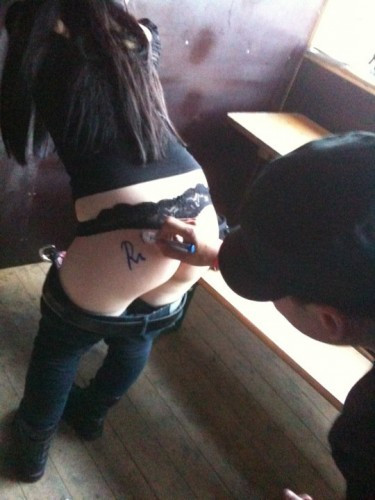 This is really the fourth installment of MISCELLANY, but I like my photo caption better as a title than “Miscellany (No. 4)”.  And actually, seeing the photo up above was part of my morning’s journey around the webz, so it’s a legitimate part of this post.

The eye-catching image at the top is a new addition to the photo albums on Grave’s Facebook page. I don’t know whether the person executing the autograph is a member of Grave or another band, but his penmanship is amazingly good, under the circumstances. (To see our review of Grave’s new album, go here.)

The rest of this post is a log of my morning’s browsing around the internet, randomly checking out music from bands I’d never heard before. The way this MISCELLANY thing works, I have no advance idea whether the music will be good, bad, or indifferent, so I can’t offer you any guarantees either. I just dutifully set out what I found, and presume you’ll be interested.

Here are the bands I checked out this morning: Drudkh, Sickening, Psycho Enhancer, and Infinite Tales.

Oh yeah, as icing on the cake, we’ve got a stupendous Gojira video to close out this post.  (all this shit, after the jump . . .) 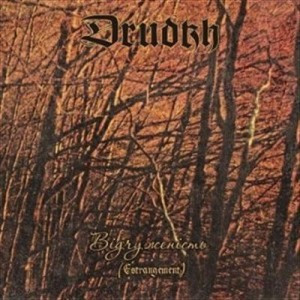 I’ve heard of this Ukrainian band before, and some people whose opinions I respect like ’em. What caused me to start the day listening to Drudkh was a tweet from one of the dudes in The Funeral Pyre asserting that a Drudkh song called “Skies At Our Feet” is “one of the greatest black metal songs ever written.”

Now, making allowances for exaggeration, I still decided the time had come to check out Drudkh — because The Funeral Pyre is itself a pretty hot-shit band (our review of their latest album can be seen at this location).

I don’t know if “Skies At Our Feet” is one of the greatest black-metal songs ever written. I’m not even sure it’s one of the greatest black-metal songs I’ve ever heard. But no doubt, it is one helluva song. It’s a long (almost 11 minutes) instrumental jam with minimal vocal accompaniment. It’s simple, it’s hypnotic, it’s beautiful, it’s black, it’s metal.

“Skies At Our Feet” comes from Drudkh’s 2007 album Estrangement.  Check it out:

Drudkh: Skies At Our Feet 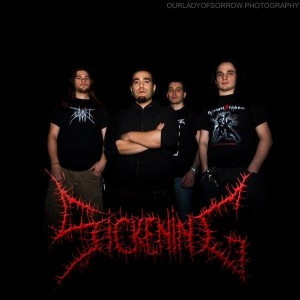 After listening to Drudkh, I followed up on a note I’d made earlier in the week to check on an Italian death-metal band called Sickening (not to be confused with Norway’s The Sickening). I’d seen a note on Blabbermouth that Sickening was about to begin recording their second full-length album, Against The Wall Of Pretence. The CD will be mixed at 16th Cellar Studio in Rome.

What I heard was a demo version of a song that will appear on the new album called “Blast Of Madness” It’s avaialble for streaming on Sickening‘s MySpace page. Here it is: 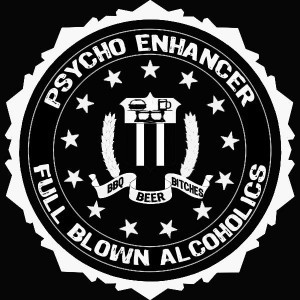 We got an e-mail from this band whose members are from Long Island and Queens, and so my next stop on today’s journey was to check out their MySpace page.

What should greet my eyes but a blaring banner that proclaimed Psycho Enhancer as “THE DRUNKEST MUTHAFUCKA’S ON EARTH”, and a media player with song titles such as “Wasted Life”, “Beers On The Dance Floor”, and “Full Blown Alcoholics”.

It appears they self-released an album called Party Like A Psycho on their DIY label Party Van Records last August. You can order it at this location. But should you order it?

Well, it’s a novel concept: hardcore punk that doesn’t take itself too seriously. The hard-charging music includes compulsively chugging riffs, some old-school breakdowns, nasty hardcore barking, and lots of lyrics about beer. In fact, I think all the lyrics are about beer. I also had a blast listening to the songs.  Here’s a sample:

From Psycho Enhancer, I moved over to another Ukrainian band called Infinite Tales. Earlier in the week, I’d seen a blurb about the band’s new video, “Running Away”, on Blabbermouth and made a note to check it out. And then I saw another blurb about the video on MetalSucks.

So this morning, I did watch the video finally. The song comes off the group’s full-length debut, Only The Beginning, which was released last year in the Ukraine via N.J. Music. It’s melodic death metal, with harsh male vocals trading off — sometimes within sentences — with clean female vocals by an Avril Lavigne look-alike named Kiki.

I’m not a big fan of this style of metal — mixing clear, clean female vocals with the hard stuff — but this is a catchy song and Kiki’s got a decent voice. So, I’m not complaining that I took the time to watch this.

If you like this music, here’s the band’s ReverbNation widget with more songs and free downloads:

Well, that was pretty much the end of my MISCELLANY browsing for the day. But before closing out this post, I thought I’d throw a few other things your way just for the fuck of it.

First, one of our readers who goes by the handle BeeAreWhyAyeEn sent us a couple photos he took of Job For A Cowboy from their stop in Allentown, PA, with Whitechapel, Cattle Decapitation, and Gaza — and my, what an ass-kicking show that must have been.

A professional photographer would undoubtedly find all sorts of things wrong with these pics, but we thought they were cool. They make it look like the world was ending — or maybe a new one was being born — to a JFAC soundtrack. 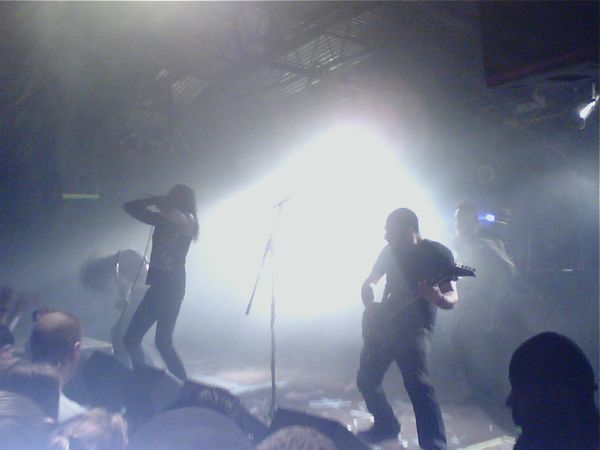 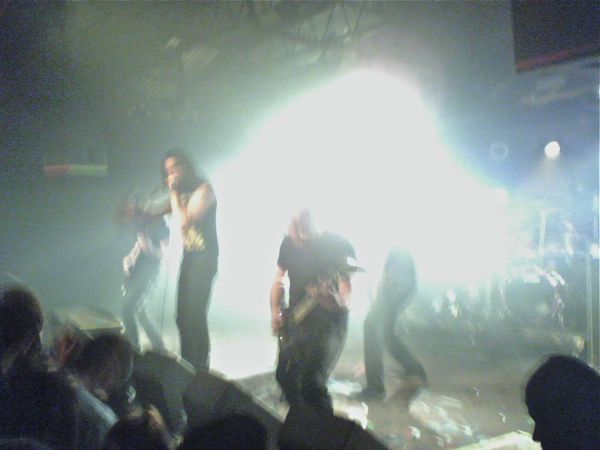 Finally, just as I was finishing up my internet rounds, I got an e-mail from one of my NCS collaborators, IntoTheDarkness, sending me a link to a MetalSucks blog post from earlier in the week that I had somehow missed, with only this message from ITD: “Oh my.”

Within the MetalSucks post was a link to a 72-minute, pro-shot video of the god-like Gojira performing at Festival Les Vieilles Charrues on July 27. Not a bad way to end the morning.

If you’re a Gojira fan, then this will likely cause you to wet yourself. If you’re not, well, all we can say is, Have a nice fucking day.

4 Responses to “I WILL NEVER WASH MY ASS AGAIN”