Some of the albums we’ve liked the best in 2010 have been throwbacks, and Shadowcast by Insidious Disease joins those ranks.

In this case, the music is the kind of blackened death metal that sawed its way down to the center of the earth from Sweden about two decades ago, and thus made a path for a column of frothing magma to make its way to the surface.

Insidious Disease is a super-group of veteran musicians who know what they’re doing, and know what they like. They’re deeply embedded in the style of music they play, and they use their knowledge and their feel for the style to create songs that are both strongly reminiscent of an earlier time (the time of early Dismember and Dissection and Autopsy) and yet joltingly cool.

There is a reason why this style of music started an underground revolution. There is a reason why it still exists. It has spawned dozens of brilliant offspring, but in this creatively updated but faithfully original form, it’s still a fucking headbanger’s delight.  (more after the  jump, including a sample track to hear . . .) 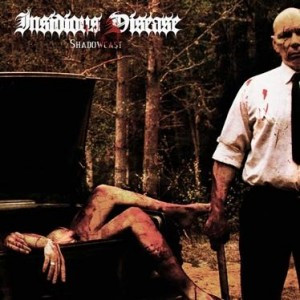 We’ve been looking forward to this album since we first heard it was in the works back in April (and wrote about the news here). What originally grabbed our attention was the line-up of musicians in this band:

We got excited all over again when we learned about the release date for the album and found a video of the band performing one of the forthcoming tracks. So we wrote again here. Our reaction to the song, and that of some readers, was a bit on the lukewarm side — but we’ve still been interested to hear the finished album, and now we have.  It was worth the wait. 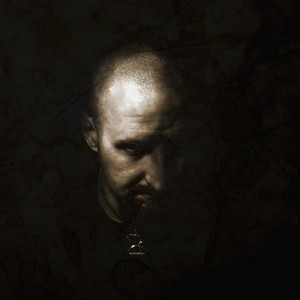 As you would expect, given the musical focus of this band, Insidious Disease builds its foundation on the almighty riff and on its brutal handmaiden, the double-kick. Almost every song features the kind of diseased, chainsaw riffing that produces the same effect as a giant hand that grabs your jaw and starts jerking your head up and down, while lifting you bodily off the ground at the same time.

And if the riffing weren’t enough to trigger the Pavlovian headbang reflex, Tony Laureano’s drumming finishes the job. No, it’s not all blast-beats and double-bass, but man is it cool when those twin weapons are unleashed.

Jittering riffs, grinding noise, propulsive pounding, a cathartic groove — what more could you want?  Well, truthfully, as fun as that is, if that’s all there were, we wouldn’t be writing about this. But there is more.

First, there are the ethereal guitar leads and solos that come out of nowhere in almost every song. They send a charge through your head. Sometimes they make you feel like you’re on a roller-coaster that’s headed for the heavens. They make these cool songs memorable. 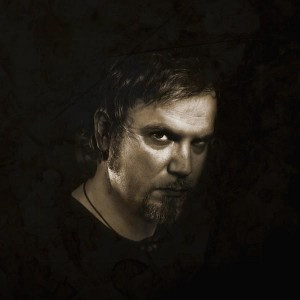 Second, there are the vibrating, tremolo-picked rhythm and lead guitar lines that give the music that very dark, melodic overlay that we associate with black metal. We expected some accomplished guitar work from Silenoz and Jardar, and that’s what we got. These dudes haven’t played together in a band since Malefic back in the early 90s, and it’s fun hearing them together again.

And third, there are Marc Grewe’s vocals. They are a necessary part of the machinery that produces the unique effect of this kind of music.

You listen to enough death- and black-metal, and you eventually realize that all vocalists are not created equal. Yeah, it’s pretty amazing to people like your NCS co-authors that anyone can pull off this kind of vocal shit without having to be hospitalized, but after a while, we realize there is indeed more to be desired than just that achievement by itself. There can be — and should be — life and soul and vocal range in this style of singing, evening if it ain’t the slightest bit clean.

And you get all of that on Shadowcast. Grewe’s vocals are full of emotion, they’re raw, they’re interesting, they’re plenty enuf evil, and they punch with heavy force. 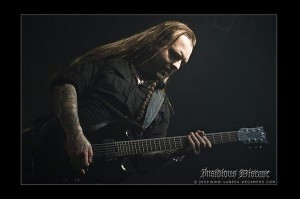 If you’re looking for extreme metal that breaks new ground, you won’t find that in Shadowcast. If you’re like us, and you never get tired of this early Swedish-style of death metal, and if you like hooks and grooves along with the viciousness, plus the blow-out power that modern production techniques can bring to this kind of music, then you’ll like what Insidious Disease have wrought on Shadowcast.

We also have to mention the artwork in the CD insert. It’s a collection of disturbing photographs, jointly conceived by Silenoz and a photographer named Kjell Ivar Lund, and executed by Lund. You can see many of the photos in the Band gallery at Lund’s web site. Creepy but cool. 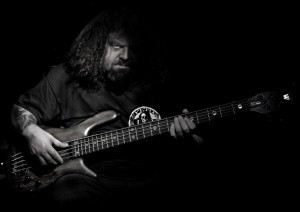 We always prefer to let you hear a song from the albums we review, because no matter how eloquent the review (and ours are usually about as eloquent as the street scene outside a bar at 2 a.m.), there’s really no substitute for listening.

We had a brain-concussing time figuring out what to put up from Shadowcast. Just too many close calls. That’s why, if you like this style of music, you should hear the whole bleeding thing. Here’s the sample we chose: