Seriously — gaze upon those names, and be honest: You’re interested, aren’t you? We sure as hell were. And we weren’t the only ones, because this band has just signed a worldwide deal with Century Media Records. They’ve recorded 12 songs for a debut CD to be called Shadowcast, and from what we’ve heard, it’s going to be a fucking killer.  (more after the jump, including a song . . .) 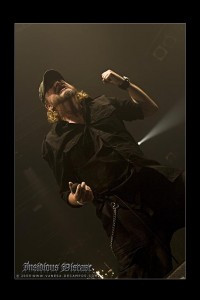 Three songs are available for listening on the band’s MySpace page, and each of them is a top-shelf offering of death metal with plenty of groove and a few other modern twists.

Take “Boundless” for example. It’s a fast-paced assault with infectious riffs and melodic guitar leads, nasty death-metal howls and shrieks courtesy of “Groo” Grewe from the old cult band Morgoth, and the kind of all-pro drumming you would expect from Tony Laureano.  It definitely hits us in the sweet spot, as do the other two songs.

Super-groups are perfectly capably of sucking ass, but this one doesn’t. In fact, this one sounds like the real deal. Our only frustration is that we haven’t found any reports about when Shadowcast will hit the streets. We’re just going to have to keep our pointed ears to the ground and be alert to new developments — which we will of course share immediately with all of our wolfish readers.

In the meantime, sate your bloodlust with this pre-mix offering of “Boundless”: