After releasing a collection of albums and EPs in the early ’90s, Germany’s Morgoth disbanded in 1998, but re-formed in 2011. They released a single named God Is Evil last year, and now they’ve completed a comeback album with the title Ungod. The album will feature vocals by new member Karsten “Jagger” Jäger (Disbelief), who replaced Marc Grewe in December. END_OF_DOCUMENT_TOKEN_TO_BE_REPLACED 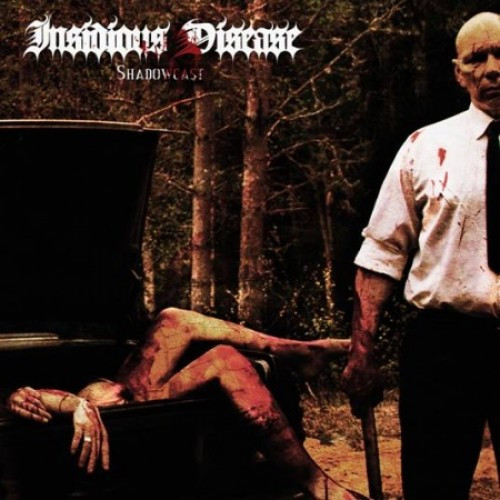 We’ve been waiting for the seed of Insidious Disease to blossom forth from the fertilized earth. Will it be a putrescent mass of unearthly purplish life, writhing with hungry tentacles and awesome in its otherworldly magnificence? Or will it be just another pumpkin?

Why do we wonder? Because of who’s in the band:

We got so stoked when we first heard about this line-up that we wrote about it two months ago, and we’ve been waiting not-so-patiently for more news ever since.

Now we know that Insidious Disease will release their debut album, Shadowcast, on July 12 in Europe and July 27 in the U.S. via Century Media Records. And now we have a video of the band performing a track from that album called “Rituals of Bloodshed”. Watch it after the jump, and decide for yourself: Awesome putrescent mass or just another pumpkin? And while you’re deciding, be stunned and amazed by the infernally amazing special effects. END_OF_DOCUMENT_TOKEN_TO_BE_REPLACED

Seriously — gaze upon those names, and be honest: You’re interested, aren’t you? We sure as hell were. And we weren’t the only ones, because this band has just signed a worldwide deal with Century Media Records. They’ve recorded 12 songs for a debut CD to be called Shadowcast, and from what we’ve heard, it’s going to be a fucking killer.  (more after the jump, including a song . . .) END_OF_DOCUMENT_TOKEN_TO_BE_REPLACED