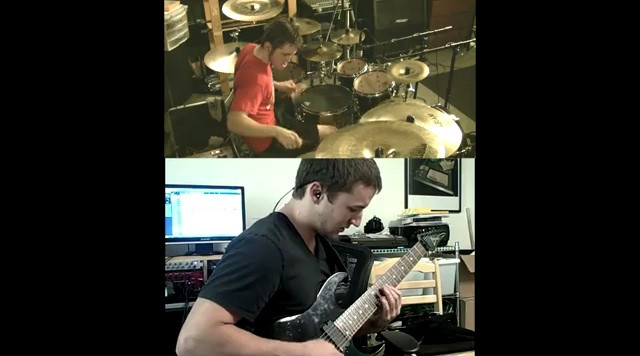 I guess this MISCELLANY thing is turning into a weekly installment. I do have fun with it, and I hope you continue to find it worthwhile, too.

For new readers, it’s a record of how I spent my time on a recent morning (in this case, yesterday), checking out music I hadn’t heard before. The process is pretty random. I see something that looks interesting — whether from an internet post somewhere or an e-mail we receive here at NCS or a MySpace friend request or something that shows up in the mail. 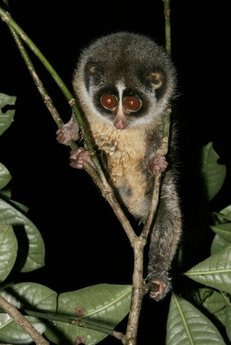 I’m still hoping our cat will bring me a new CD someday, thinking it’s a mouse. That would really be random, but it hasn’t happened yet. I try to explain what I want, but he just looks at me like that rare Sri Lankan loris over on the right. Except he’s a cat. I wouldn’t want a loris for a pet because they have hands. That would worry me.

Anyway, this MISCELLANY post is a record of what I heard, not knowing in advance whether it would be good, so you’re kind of taking pot luck right along with me. As usual, there’s an international flavor to what I found. And as it happens, I had amazingly good luck on this most recent excursion. Not 100% satisfaction, but pretty fucking close.

The performers whose new music I heard (or whose new videos I watched) were: Navene Koperweis and Alex Rudinger (U.S.), Sole Remedy (Finland), The Red Shore (Australia), Apocalyptica (Finland), and The Autumn Offering (U.S.) — with a little bonus from The Crown (Sweden).

You can hear the music and watch the vids after the jump . . .

Navene Koperweis is a self-taught drummer from California who used to play in the band Animosity and now plays the kit with the god-like Tosin Abasi in Animals As Leaders — which is a stunning band you ought to check out if you haven’t already (we reviewed their last show in Seattle here, with pics, and we’re massively looking forward to their return on the SUMMER SLAUGHTER tour).

Koperweis is also part of a two-person experimental death-metal project called Fleshwrought, in which he plays all the instruments and vocalist Jonny Davy from Job For A Cowboy growls and shrieks.  Fleshwrought’s debut album, Dementia/Dyslexia, was released by Metal Blade on August 3.  I haven’t caught up with that one yet, but I have heard one song from the album, which was included on a free Metal Blade sampler that we wrote about here, and it’s outstanding.

Alex Rudinger is a Maryland-based session musician and drummer for an unsigned band called Ordinance. As you’ll see in a moment, he’s a heavyweight talent, too.

So, with that lead-in, I saw a message from Animals As Leaders about a new video of Koperweis and Rudinger performing a Fleshwrought song called “Inner Thoughts”, and that was my first stop on my web-browsing tour. Not sure how these two came to do this together, but it’s a stunner. The video uses a split-screen technique to show these two accomplished performers jamming this technical instrumental.

It’s a blast to watch, and to hear. Kind of gobsmacking to realize that Koperweis can play guitar as well as he drums. Our only question is, who’s playing the saxophone? 🙂 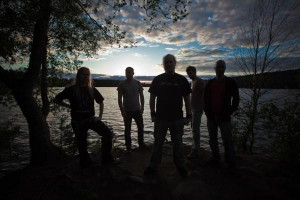 For my next stop, I checked out a band from Lahti, Finland called Sole Remedy, which was the subject of a news item on Babbermouth that I saw earlier in the week. I have a tendency to check out just about any metal band from Finland – because it’s a scientific fact that the Finnish water supply contains unique natural ingredients that mutate most children in the womb into metal prodigies.

Sole Remedy has a new album (their second) called Apoptosis that’s scheduled for release on September 27 via Aftermath Music, and they’ve made a single from the album available for free download. The band describes its music as “progressive-melancholic metal”. I wasn’t sure what that meant, but as I said, they’re from Finland and they play some kind of metal, and that was pretty much all I needed to know.

As it turns out, that new single, “Wolf In Me”, is a departure from the usual breed of metal we cover on this site, because, well, it’s very melodic and it includes a fair amount of clean singing along with the growly stuff.

But I’ll tell you what, I’m hooked by the music. Hell, I’m not just hooked, I’m gaffed, gutted, filleted, and grilled with a nice lemon-butter sauce.

“Wolf In Me” starts with some fast-paced, riveting technicality and includes a long instrumental guitar passage in the middle that’s really beautiful. The melodies are catchy, and those clean vocals are strong and clear.  Overall, it brought to mind this band’s fellow Finns in Amorphis, as well as Opeth.  Check it out:

Sole Remedy: Wolf In Me

The single can be downloaded for free via a link at this location (right-click on the link you’ll find there and select the download option). The album can be pre-ordered at www.aftermath-music.com, and if you’re interested in more info about the band, their MySpace is at this location.

For me, “Wolf In Me” wasn’t enough Sole Remedy. I wanted to hear something more, and I found the following track, which also appears to be from Apoptosis, called “The Burden”. It’s cool shit too. 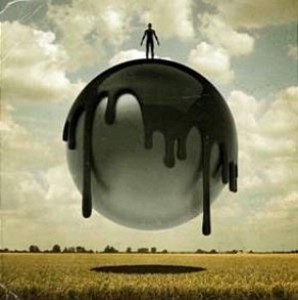 After all that melodiousness, I decided it was time for some pummeling.

I saw a note somewhere that The Red Shore had made a new song available for streaming. The Red Shore is a death metal band from Australia. They’ve got a new album called The Avarice of Man due for release on September 3 on Roadrunner Records. They’re also touring the U.S. as part of THE NO MERCY TOUR along with Suffokate, And Hell Followed With, Murder Death Kill, and King Conquer (tour dates can be found here).

My co-authors and I thought their debut album, Unconsecrated, was kick-ass awesome. Since that time, the band has recruited a new vocalist (Chase Butler) and drummer (Tim Shearman) — both of whom turn out to be quite good.

How do I know that? Because of that new song. It’s called “The Seed of Annihilation”. It’s up on the band’s MySpace page, which features a cool new layout. The song itself is a good example of modern death metal done right — it kicks hard, the playing is technically impressive and sharp as spikes, but it’s got a buncha sweet grooves and hooks too.

Would you like to hear the song? OK, go right ahead:

I saw a Facebook blurb from Apocalyptica about the following offer: You sign up for Apocalyptica’s newsletter, and in return, they give you a link for a free download of a song called “At the Gates of Manala”, which will appear on the band’s forthcoming album, 7th Symphony.

I’m a sucker for legitimately free music, as well as a sucker for Apocalyptica, and I’m impatient, so of course, after getting pummeled by The Red Shore, I agreed to that Apocalyptica bargain. I’m sure glad I did. Besides, I’ve got more e-mail addresses than that loris has fingers.

“At the Gates of Manala” is a purely instrumental track. The first part of the song is heavy as fuck, with some of the cellos cranking out a headbanging rhythm and one of them feeding in and out with a shrill, psychedelic lead. Eventually, the pace drops, the pounding relents, and the song finishes with a beautiful atmospheric passage. Really good stuff. One of the best Apocalyptica instrumentals I’ve heard in a while.

If you want to do the exchange of your e-mail address for the download, here’s the link. If you’d like to hear the song first, you can do that right here:

Apocalyptica – At The Gates Of Manala 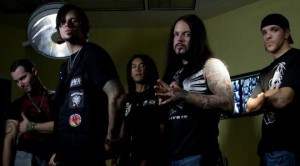 The Autumn Offering is a metalcore band from Florida who’ve been around for a while. Their fifth album, self-titled, will be released on August 31 through Victory Records.

I used to like their music, but it’s been a few years since I’ve paid much attention, mainly due to changes in my own tastes. But I saw a few days ago that they’ve just released a video for a song from the new album called “Born Dead”, and I decided to go check it out after I listened to the Apocalyptica track.

I like the song, but the video? It’s yet another tell-a-story video that has no apparent connection to the song at all (the lyrics to which can be found on the band’s MySpace blog).

It’s got some creepy images (including one of the nastiest pieces of orthodontic headgear you could imagine), some gore, and a hysterical blonde running around a hospital, apparently being pursued by some ghoulish-looking medical professionals. I say “apparently” for reasons that will become evident by the end of the vid.

Of course, the shots of the band show them performing in an operating room. At least someone cleaned it up after the docs finished working on that chick with the creepy headgear.

This is a late addition to the post, and I’m running out of time.  So, all I’ll say is that The Crown has put up yet another song from their forthcoming new album — the first in almost 7 years.  For more background and the opportunity to stream the first track, jump to our first piece about The Crown two weeks ago.

The second song, just uploaded yesterday, is called “Doomsday King”. Oh, is it good. Ain’t nothin’ like that ol’ time Swedish death metal. You can listen at the band’s MySpace page — here.