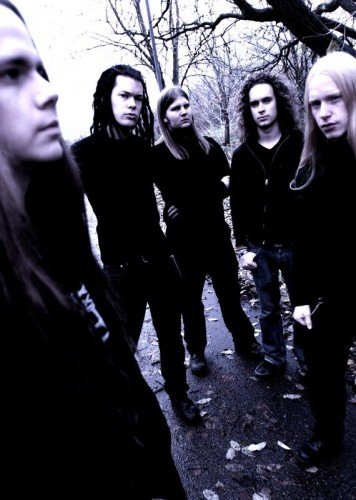 We hope that Menhir changes that picture, because it’s packed with memorable music — a very strong follow-up to Will and Perception, which is itself an album worth tracking down. (our review of the album, plus a track for you to hear, plus links for free downloads — all that, and more, after the jump . . .)

Canopy has a knack for creating melodic death metal with power grooves and prog-metal flourishes, without ever losing an ominously heavy cutting edge.

The title track on Menhir is a good example. The song starts with a slow, dreamlike keyboard melody and a quiet guitar lead. Then the drums begin to clatter and the bass picks out a simple arpeggio.

Almost two minutes into the song, the intensity begins to build with a melodic, tremolo-picked riff that shifts into a brute-force headbanger when the howling vocals kick in at about the 3:00 mark.

Behind the deep, harsh vocals, the lead guitar weaves a nimble melody, the second guitar injects a stuttering, neck-snapping rhythm, and the drummer adds some very cool progressions on the toms, with judicious use of the double-kicks and blast-beats.

The song is more than 8 minutes long, but it’s catchy as hell and instrumentally impressive — and it’s only an example.  All the songs feature similarly inventive combinations of rapid-fire, intricate riffing and technically attention-grabbing solos, dissonant hammering rhythms and catchy melodies. 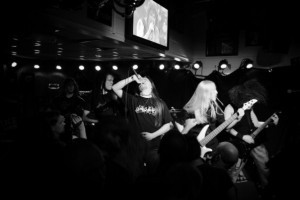 But that’s not to say they’re clones of each other either. “Earth Splits Into Fire” interleaves acoustic picking with merciless hammering and eastern-sounding guitar melodies. “The Entire City” begins with a thrash attack and features dynamic full-forward bass sweeps, galloping guitar leads, and quiet tinkling keyboard sections. “New Construct” is dark, dissonant, and at times mournful. And again, those are only examples.

All the song structures tie together, in ways that make sense, a blend of styles and tones, and combinations of awesome riffs and divergent tempos. And, of course, what makes it all work so well is the talent of the performers.

The rhythm section is also unusually good. Peter Lindqvist seems to have just the right drumstrokes at just the right moments, to drive the songs forward, to accent their power, to make them even more interesting, and Daniel Ahlm‘s bass-playing is creative and almost always noticeable in the mix. 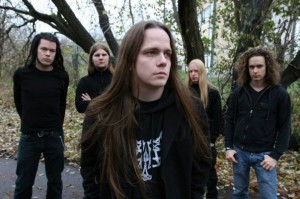 Last, but by no means least, Fredrik Huldtgren‘s vocals are vital to the sound on Menhir. They’re deep, resonant, and gratifyingly harsh — down in the timbre of Johan Hegg — and they give the music a dangerous edge even at its most melodic. But they never grow monotonous, in part because Huldtgren is equally adept at hitting black-metal-style rasps higher in the range and even passionate clean vocals on “Inward Burst”.

Bands that put out remarkable debut efforts like Will and Perception more often than not fall prey to what we Americans call a “sophomore jinx” — where the second effort falls short of the first. But that’s not true of Menhir. We’re not sure there’s anything on Menhir quite as inventive as “Decipher” or quite as magnetic as “For the Sickened Voice to Hear” from Will, but Menhir reflects a growing maturity in the songwriting, and it loses nothing in its enveloping power or the captivating nature of its rhythms and melodies.

We’re so high on both albums that we’ve compiled the most complete menu of options for obtaining the music that we’re capable of finding.

As for the new album, it’s available for digital download for 5 Euros at Canopy’s Bandcamp page (here), and at that same site you can also download individual tracks for a minimum of 1 Euro — and stream each of them first.  Or you can order the physical digipack at this location. 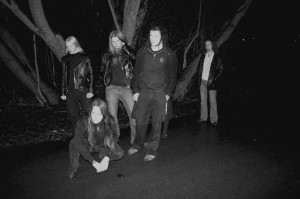 But we like to provide a public service, too, so we’re putting up two songs for you to stream without leaving our site. “Decipher” is from Will and Perception and “Earth Splits Into Fire” is from Menhir. We think they’re both excellent, and if you dig ’em, show this talented band some love and spread the word — or better yet, go spend yo’ money.

Here’s that ReverbNation widget with more songs from Menhir: