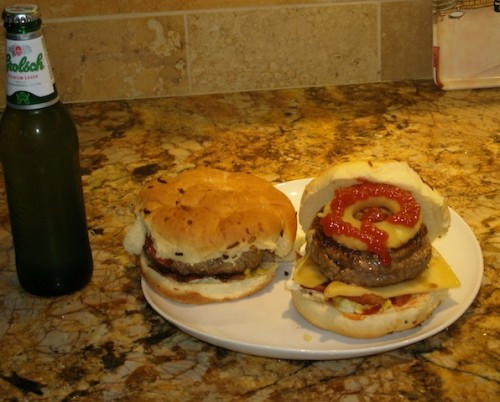 One of the many things we like about the comments on this site is that you never know where they’re going. They can start on one subject and finish in an entirely different place. Usually, they stay within the bounds of music, but not always.

Yesterday provided a good example. One string of comments started with Goatwhore and finished with a burger recipe. No shit.

And not just any burger recipe. This one came by way of Dutch metal blogger Niek, and included cheese-onion rolls, fried egg, bacon, gouda cheese, and a pineapple slice. And here’s what Niek’s finished product looked like: 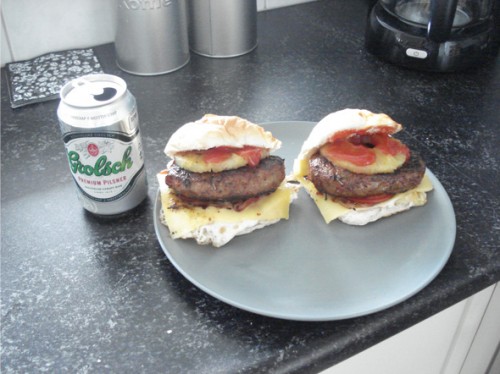 Well, that just looked and sounded so fucking good that I had to try and duplicate it, right down to the Grolsch beer in Niek’s photo. Our results are at the top of this post, and the story is after the jump, along with suitable musical accompaniment. 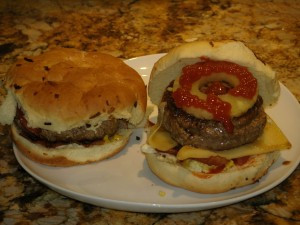 I was going to attempt this feat of copying by myself for lunch yesterday, but it turned into a group adventure — dinner for four, including my two sometimes NCS collaborators, Alexis and IntoTheDarkness.

It took me a couple of stops, but I got all the required ingredients, including the Grolsch. The only place where I had to cheat was the bun. I found cheese buns and I found onion buns, but no cheese-onion buns. Must be a Dutch thing. Anyway, I went with the onion rolls.

We fried the bacon and the eggs, and then the time came for the main ingredient. Niek’s patties looked so gargantuan that we started with a half-pound of lean ground beef per burger, and we also decided to pan-fry the pineapple slices for a few minutes, too.

Eating those babies was a challenge. You’d have to unhinge your jaw to get the thing in your mouth, and the ingredients kept trying to escape the buns. But we like rising to challenges, and somehow, we managed to eat everything. To quote the immortal Samuel L. Jackson,

Seriously, that was an awesome burger — all the different tastes combined into a very metal eating experience, burger-wise. That Grolsch went down very easy, too. Really good beer. Could be habit-forming. 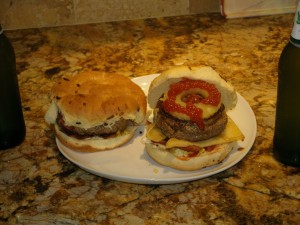 And then the food coma hit.  Like a ton of bricks.  I felt like a fucking walrus out of water, except I couldn’t even lift a flipper. My eyelids were the only thing I was capable of moving. I may never have to eat again.

Fortunately, this is why god made TV and the NFL, and the Seattle Seahawks were playing the Vikings. The Hawks’ defense played really well, the offense sucked, the Hawks lost, and I still couldn’t move. My comrades in metal food-dom weren’t faring much better.

This burger needs a name, but I’m still too comatose to come up with a clever one. I’m tempted to call it “The Punisher”, but that’s not metal enough. Have to think on it after I can think again, y’know, sometime in 2011.

I’m gonna try to sleep this off, though I have a feeling I’ll be re-living the experience in my dreams.

In honor of this awesomely brutal burger recipe and our bro Niek who turned us on it, we need some Dutch metal that, like the burger, is heavy and sweet, crushing and sublime, beefy and tangy. I’ve got just the thing! A suitably entitled tune by Detonation from the album Portals To Uphobia:

Detonation: The Loss of Motion Control