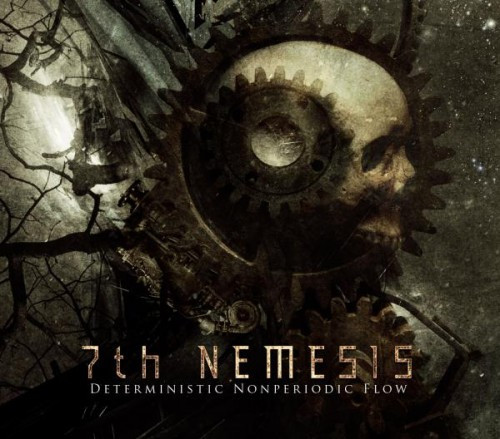 This will be short, but sweet. It concerns 7th Nemesis, a French band we found out about for the first time less than two months ago. We sang the praises of their 2008 album, Archetype of Natural Violence, here.

Not long ago, the band started emitting messages to the effect that a new album was on the way. Then last week, they released a really short video teaser for the album, which will be called Deterministic Nonperiodic Flow. Then yesterday, out popped the cover for the album — which would be that nice piece of visual awesomeness up above.

And then today, two new songs from that album magically appeared on the 7th Nemesis MySpace page (which has been completely revamped): “Seeding Devolution” and “Legacy of Supremacy”.

And may we say they are absolutely two killer examples of unpredictable, progressive death metal? Why, yes we may. And you may need to have your head rung like a bell, in which case jumping over to that page will do the trick. By the way, the band has a new vocalist, and that schizophrenic vocal style evident on Archetype has become somewhat less schizophrenic on the new songs but is just as vein-bursting.

No precise word on when the album will become available, but it’s supposed to be “soon”. The band is searching for a label. Hope they find one.

If you want to see that brief video teaser, continue past the jump.