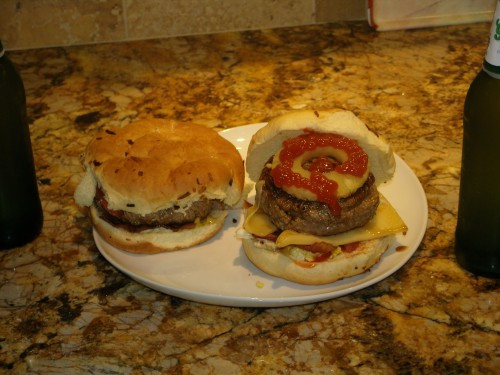 A little more than a week ago, we joined forces with the Netherlands-based metal blog Death Metal Baboon (DMB) to sponsor a contest. We invited our readers to submit their most inspired names for a gut-busting burger concocted by DMB’s Niek that those of us here at NCS had the pleasure of reproducing in all its glory for our own delectation. (The story of how that happened and how the contest came into existence can be found here.)

DMB and NCS agreed to contribute the following CDs as a prize for the winner:

Demonic Ressurection – The Return to Darkness

The Way of Purity – Crosscore

We got some outstanding name suggestions from NCS and DMB readers, and selecting the winner wasn’t easy. But we do have a winner, and his name is Dan. (more after the jump . . .) 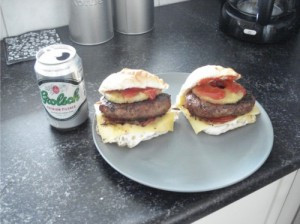 Based on another comment from him, Dan appears to be a U.S. resident who is currently studying abroad in the Australian town of Adelaide, home of some very good metal bands, including the Guantanamo Bay City Rollers and Orphans of the Sky.

And Dan’s winning entry was: THE BASS DROP DELUXE (aka The 808Burger) “because it has roughly the same effect on your stomach.” Dan’s choice got the edge not only because eating Niek’s burger is the gastronomical equivalent of a bass drop but also because a discussion about bass drops in the comments of an earlier post was what eventually led to this whole burger contest thing in the first place.

To all the other people who submitted name suggestions, thank you! You gave us some big laffs. To Dan, as soon as we figure out where Australia is, Niek and I will be sending your CDs by a form of delivery guaranteed to reach you at some point before the onset of the next Ice Age.

Niek has posted the recipe for THE BASS DROP DELUXE at the DMB site. Happy gorging!

3 Responses to “NAME-THE-BURGER CONTEST: WE HAVE A WINNER!”