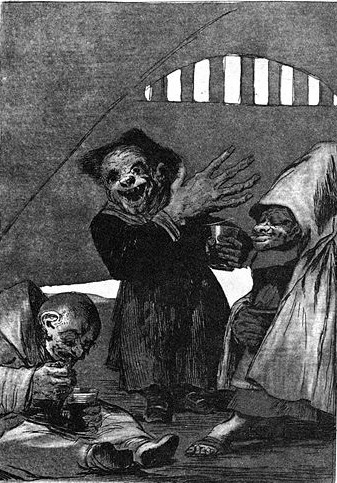 We’re rapidly approaching one of our favorite calendar dates of the year — Halloween. It’s a night when our most frightening superstitions are given free reign, when evil and mischief frolic hand-in-hand through the night, when goblins emerge from their hiding places to create all manner of chaos.

It’s also a night when people dress up in ridiculous costumes, masquerading as cowboys, or nurses, or Lady Gaga. That shit don’t count. That’s not Halloween. Halloween is a night of menace and mayhem, ov fire and the void (yeah, I stole that phrase from somewhere), of phantoms and freaks.

And in celebration of the imminent arrival of All Hallow’s Eve, it’s only fitting that we feature some metal that’s played by, for, and about goblins. What? You didn’t know goblins played metal? Well what else would they play? 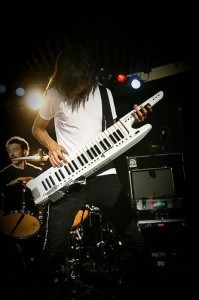 Our first example of the goblin-metal sub-genre comes to us via a band with the truly awesome name of Nekrogoblikon that hails from the bleak, dark, dank, craggy fastness that is,  uh,  Santa Barbara, California. Okay, maybe this nearly perfect stretch of SoCal’s coast isn’t the first place you’d think of as a spawning ground for goblin metal, but it just goes to show you how deviously clever goblins are in picking their hiding places. When NCS commentator ElvisShotJFK turned us on to Nekrogoblikon in an e-mail, he wrote this:

“Trolls aren’t the only ones that can play metal. Goblins can kick ass too! Some clean vocals do make their way into some of the material, a bit of keyboard cheese and a touch of light neo-classical. But it all works, because it’s so fucking fun.  And it’s heavy metal goblins, for cube’s sake!”

(more after the jump, including music for your pointy ears . . .) 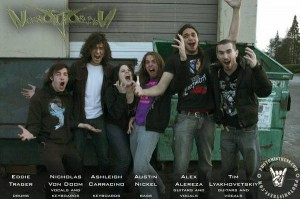 Elvis hit the coffin nail square on the head: Nekrogoblikon is fucking fun, in a demented goblinesque kind of way. The music is a uniquely creative blend of melodic death metal, folk metal, and bits and snatches of symphonic black metal thrown in for good measure. Headbanging, Scandinavian-style riffage struts its stuff cheek-by-jowl with oompah-style folkishness, complemented by keyboard solos and raspy Nordic vocalizations. There’s even a dollop of techno, which believe it or not actually works.

The bands that first came to mind as we listened to Nekrogoblikon’s offerings on their MySpace player were Finntroll and Moonsorrow, but Nekrogoblikon are more mischievous. In fact, if the music weren’t so insanely inspired and the instrumental execution weren’t so top-shelf, the goof factor would be borderline over-the-top. But whoever and however many people are playing on those songs have really got some good technical chops. 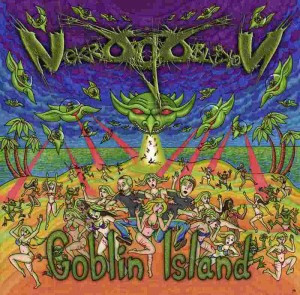 Nekrogoblikon has one album to its credit so far, a 2006 debut called Goblin Island. All but two of the album’s 12 songs have the word “goblin” in the title, and they all seem to be about goblins doing various goblin activities, such as flying spaceships, battling pirates, and feasting on various parts of the human anatomy. There’s also some smack-talking in the song “Goblins Are Better Than Trolls” — an assertion that’s sure to ignite heated debate among the ranks of goblin- and troll-metal aficionados.

2006 is ancient history, of course, but it happens that Nekrogoblikon has recently finished recording and producing a new album’s worth of material, to be called, oh-so-appropriately, Stench. In fact, the band streamed the whole thing over the internet three days ago — but only for a 24-hour period, and of course we missed the whole fucking thing. However, pre-production versions of two of the new songs (“A Feast” and “No One Survives”) are up on the music player at the Nekrogoblikon MySpace page (here).

When will Stench be released? A recent Facebook post by the band says they’re holding up the release in hopes of finding a label that will provide the album effective promotion, which means, who the fuck knows? But we will be waiting and watching, crouched in the dark hiding places with our goblin brothers and sisters, greedily rubbing our greasy talons in anticipation.

For now, here’s a track from Goblin Island for your listening pleasure:

Nekrogoblikon: Goblins Are Better Than Trolls

And here’s a live performance video of the band playing another hot track called “Goblins Ahoy”. The audio quality is pretty decent, though the video part is dark and murky (of course it is).

For more info, Nekrogoblikon’s Facebook page is at this location. Goblin Island is available for purchase at iTunes and Amazon MP3.

A Band of Orcs crawled forth from the sodden, slimy, gloomy muck of,  uh,  Santa Cruz, California. What did we tell you about the devious cleverness of goblin hiding places? This band not only talks the goblin talk, they walk the walk (lurch the lurch?). By which we mean, they actually look like orcs. Don’t believe us?  Well, feast your hooded eyes on this: 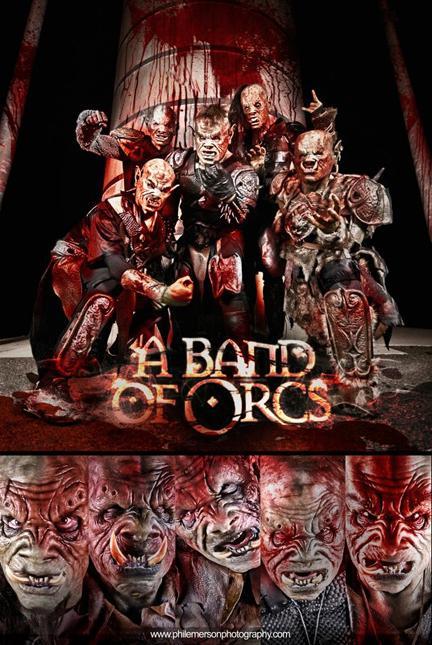 See what we mean?

A Band of Orcs has one release to their credit, 2007’s debut EP WarChiefs of the Apocalypse. It’s full of full-bore, superheated pummeling  — big, thick riffs hammering away at high speed, shrouded in sulphurous fumes and throwing up images of fang and claw. The band is also at work on an album, projected for release next summer, called (we think) The Hall of the Frozen Dead, and the title track is now available for purchase on iTunes worldwide. It’s also still streaming at the Metal Sanaz web site.

That song is a piece of blackened death-metal orcishness, switching back and forth between blistering, technical hammering and mid-paced, old-school, chainsaw bludgeoning, with a couple of molten guitar solos erupting in the middle and near the end of the track. Don’t be thrown off by the orc schtick — these dudes (or whatever the fuck they are under those grisly masks) can play some legit death-metal grittiness.

A Band of Orcs achieved a significant measure of public notice within the halls of goblin-dom through the August 2008 release of a CGI-enhanced video of their song “Into The Maelstrom”. Odds are that if you creep the metallic interwebz like we do on a regular basis, you’ve already seen this bit of orcish extravagance. But if not, here ya go:

That’s all the goblin metal we have time for today. But there’s still time left between now and Halloween for us to put the spotlight on more goblin metal. All we need are your suggestions for where we might find more examples hiding away in the dark crevasses of our world, patiently waiting to emerge for the rending and tearing that goblins love so well. So hit us up with your comments, or pay the grisly price for your silence.