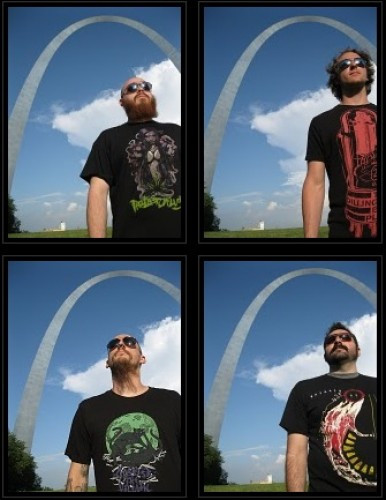 I’m still trying to recover from the insanity of the comments on yesterday’s post. It’s apparent that all I need to do to open Pandora’s box is write some shit about band names. It’s like ringing the dinner bell for Pavlov’s dog — it apparently triggers a reflex of saliva and barking and the expulsion of bodily waste. Of course, that’s just what we hope for here at NCS, so it’s all good!

But I now tremble in fear, realizing that I hold the keys to a great convulsion of dementia. I’m concerned that all I have to do now is use the word “Jambalaya” or another word that shall not be mentioned but begins with “Va” and ends in “goo”, and the earth will open up beneath my feet and spill forth all manner of skittering, black-winged, red-eyed things that will jibber and vomit out terrible, terrible imaginings that involve ElvisShotJFK‘s mom. Fortunately, I know that with great power comes great responsibility, and so I shall keep these keys hidden away in a carved, ebony box with the numerals “666” carved in the lid, to be used only when I’m bored shitless.

But I am not yet bored today. Today is a new day, and I am content to do something more mundane, like write about actual music. So, it’s time for a little MISCELLANY.

I’m still playing catch-up with a growing list of bands who look interesting but whose music is unknown to us. We compile that list here at NCS based on press releases that come to our in-box, Blabbermouth blurbs, MySpace friend requests, and demos that arrive via the ether or in the mail from all over the world. If we had nothing but time, and an endless supply of your attention, we could run a MISCELLANY column every day. Alas, we can’t do that, but to help with the catching-up, we’re running two installments back-to-back, one today and one tomorrow.

The rules of the game: I pick names off the list at random and listen to the band’s music, usually only one song per band, and record my impressions in an installment of this series. More often than not, I find good music that’s worth sharing. But the way this game works, I share exactly what I hear, even if I wish I hadn’t heard it.

The MISCELLANY installments today and tomorrow are based on listening I did last weekend. I checked out six bands, and today we have the results of the first three. All three of these bands are from the U.S., and they each occupy very different locations on the metal spectrum: Quarter the Villain (U.S.), Winterus (U.S.), and The Browning (U.S.). 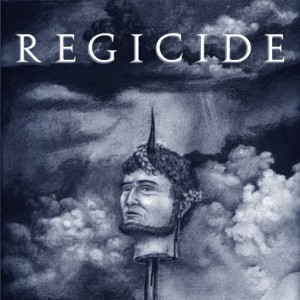 My first stop on this MISCELLANY tour was Quarter the Villain, an unsigned band from Orlando, Florida, who contacted us by e-mail about their new EP, Regicide. Those are photos of them up at the top of this post, taken while on tour this past summer. Quarter the Villain describe themselves as a technical death/grind band.

Now, the problem with many tech-death bands who play at the speed of grindcore is that they’re so intent on demonstrating their technical chops that the songs get lost in the whirlwind. You can admire the skill of the picking and drumming while it’s happening, but remember nothing afterward and feel no desire to return for another listen. Fortunately, Quarter the Villain bring a lot more to the table than some truly top-flight technical skill.

I listened to the first song on QTV’s EP, called “Frontier Justice”, and it changed the synaptic patterns in my brain. This is the soundtrack of daily life in the asylum. It’s got the over-the-borderline insanity of grind, coupled with mind-boggling technical picking, but anchored by a recurrent rhythmic theme executed expertly by the bass and drum lines. Oh yes, and wait for the rhythmic break in the middle that opens into a bizarre, pulsed guitar lead and staccato-barking by the vocalist.

Yes, those vocals — they flicker between bass-level growls and gibbering shrieks that suggest a need for thorazine. Very nice. Or maybe I’m still just rattled by yesterday’s commentary. Whatever. Listen to this, and for maximum effect, play it loud and whip your head around like that chick in The Excorcist.

You are so lucky, because QTV is making the Regicide EP available for free download to help spread the word about their music, or perhaps to unhinge society in order to make way for something new. Here’s the link to the public download page. (I already snagged and listened to the whole EP, and it’s a very strong outing from beginning to end. Seriously.) More info about the band is available at their MySpace page or their online blog (at this location).

We also found QTV’s official video for another one of the EP’s songs, “Sock Puppet Vendetta”, and we’ll put that up for you at the end of this post. Stay with us on this, because it’s not often you see a frontman singing from a hangman’s noose. 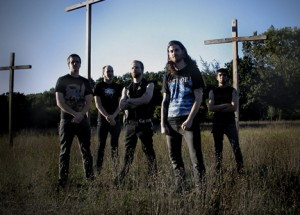 Winterus is a Michigan black-metal band we read about recently on Blabbermouth. The occasion for the news report was the band’s signing of a multi-album deal with Lifeforce Records. The band has only been in existence since December 2009. They originally called themselves The Ancient, and under that name they released a five-song EP in May 2010 called A Frozen Path.

Now, they’re scheduled to enter the studio on December 1 to begin work on a full-length debut titled In Carbon Mysticism, with the mixing and mastering handled by Ken Sorceron (of Abigail Williams and Aborted).

In the hard-scrabble world of metal, I think this qualifies as a meteoric rise. It was certainly enough to peak my curiosity. Plus, the band cites Immortal, Enslaved, Wolves in the Throne Room, and In Flames as key influences. Pretty fucking strong list of influences.

So my next stop after Quarter the Villain was a song from that Frozen Path EP called “Solace Forever” that’s streaming on the Winterus MySpace page. Big pealing chords ring out at the start, accompanied by thundering blast-beats. Then the vocals kick in — the sandpaper-throated staple of black-metal raspiness in a duet with deeper harsh vocals. The drumming is consistently sharp, fast, and powerful. The expected tremolo picking emerges, and then gives way to those ringing chords, plus flickering leads and staccato riffing.

I liked the melody and, overall, I thought the song was decent, but the high-pitched vocals held me back. They sounded strained, with audible and distracting intakes of breath. Maybe it won’t bother you. Here’s “Solace Forever”:

The Winterus MySpace page is here, and their Facebook site is at this location. 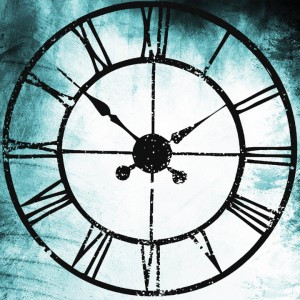 My third stop on this listening session was an outfit from Dallas, Texas, called The Browning, who’ve only been a full band for about five months. We added them to our MISCELLANY list because of an announcement last week that Earache Records had signed the band and will be releasing their debut album in 2011, and because the band includes Jonny McBee, ex-vocalist of As Blood Runs Black (a band whose previous output we liked).

The Browning already self-released a self-titled debut earlier this year, which presumably is what caught Earache’s ear. Don’t know if the Earache debut will be a reissue of that album or a new one. In any event, after Winterus, I randomly stabbed The Browning’s name on our MISCELLANY list and listened to a song called “Standing On the Edge”.

Are you ready for this? Are you ready for a marriage of techno and deathcore? Trance-dance, electronic body music, growly vocals, and breakdowns? Rammstein meets The Acacia Strain? The 2010 version of nü-metal?

Well, I like surprises, and I smiled when I heard this song. It will strike some of you (maybe most of you) as gimmicky, but I have a feeling “the kids” are going to eat this up, and I confess to a feeling of guilty pleasure when I heard it. The pinging keyboard intro got my toe tapping, and it didn’t stop. Techno dance rhythms, barking hardcore vocals, bass drops, nail-hammering riffs, and a big fucking breakdown. Check it out (more tunes from the band are streaming at their MySpace page, here).

I know you’re wondering/chuckling over this band’s name. Personally, I think you gotta have some grapefruit-sized cojones to use the word “brown” or any derivation thereof in your band’s name. You’re just asking for a big steaming load of — uh — brown to be poured over you by the trolls, with no provocation at all.

Well, the band provided an explanation, of sorts, on their MySpace blog. Actually, it’s not really an explanation, it’s more of a meditation on what the name might mean, and on band-name derivations in general (which matches up nicely with yesterday’s WHAT’S IN A NAME? post at this site). It’s clever and interesting, and we’ll put it up, verbatim, a little further below.

But first, here’s that video of Quarter the Villain’s song “Sock Puppet Vendetta”. It demonstrates an interesting technique for producing harsh vocalization. Probably tough to pull this off on a nightly basis in clubs.

And now, here’s that meditation about The Browning’s name from the band’s MySpace blog:

Wondering about our name?

Some are confused by our band name. Others are downright opposed to it. There are those that love the name and those that hate it. We feel that our name stands out and and can be remembered whether they like the name or not.

Whichever side of the fence you’re on, the name “The Browning” seems to have people wondering, “What does it mean?!” Well, there is no easy answer. But first, what is a band name? It’s just a name right? A word to label something with? Of course we could have chosen an incredibly generic name like As The Black Flame Burns Beneath Us or Fear Before The Falling Autumn or Ashes Of The Ones Who Shall Die…I think you get the point. The truth is a band’s name is open to interpretation. It may mean something different to each person who sees or hears it.

If you’re having trouble coming up with your own idea of what The Browning means to you, here are some different ways you could interpret the name:

1. John Browning was a prolific weapons designer who designed The Browning machine gun. He designed some of the biggest and baddest guns the world has ever seen.

3. Refering to number 2, you could look at society as a piece of fruit…and that fruit is browning. The Browning of Society.

So in conclusion, I leave you with some famous band names and how they came to be…

WEEZER – Band member Rivers Cuomo had the nickname Weezer in school because of a breathing problem.

PINK FLOYD – taken from the names of two Georgia bluesmen Pink Anderson and Floyd Council – from the early days when the band saw itself as a blues band.

PANTERA – Spanish for Panther and also a pretty cool car.

CHUMBAWAMBA – In a band member’s dream, he didn’t know which door to use in a public toilet because the signs
said “Chumba” and “Wamba” instead of “Men” and “Women”

So I guess The Browning ain’t so bad. You’re welcome.