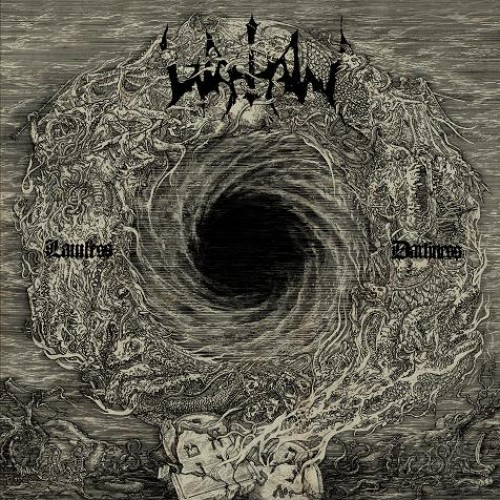 I’ve got a shitload of stuff to do in advance of my impending vacation, including advance work on this blog in an effort to keep it from going dark between November 10 and November 20. So what am I doing instead this morning? I’m fucking off, watching metal videos. Typical.

But it’s a hell of a lot more fun than doing all the crap I need to be doing. This is procrastination in action. Actually, I guess procrastination is the opposite of action. Whatever it is, I’m enjoying it, and I thought you might enjoy it, too. In case you feel like procrastinating, I’ve got five videos for you. That’s a lot of procrastinating material, but you can pick and choose if you don’t want to fuck off as much as I’ve been fucking off. The first four are live performances, with very good sound quality (and varying video quality).

The first offering is some quality fan-filmed video footage of WATAIN‘s October 27, 2010 performance of the song “Malfeitor” from Lawless Darkness at a club called the Baroeg in Rotterdam, The Netherlands. That Lawless Darkness album is stunningly good, and getting to watch Watain perform their evil music on stage is cool. Maybe someday I’ll get to see them in person.

(and after the jump, videos from God Dethroned, Asphyx, Pestilence, and The Browning . . .)

Belgium’s God Dethroned has been a long-time favorite. We raved about their last album Passiondale, here — and we featured a song from the band’s forthcoming new album here. This video is another good-quality, fan-filmed video of God Dethroned playing “Passiondale” at the 2009 edition of the Neurotic Deathfest in Tilburg, Holland. That song is awesome, and so is this performance:

Holland’s Asphyx is another long-time favorite. Their old-school death/doom is just what the doctor ordered on this Saturday morning. This is more quality, fan-filmed video of Asphyx playing “Death, The Brutal Way” in Holland earlier this year.

Sticking with our Dutch theme, the next video is from Pestilence. So nice that they rose from the grave after a 15-year hiatus.  Pestilence is currently working on a sixth studio album, which is tentatively expected to be released in February 2011. This is a video of the band playing “Lost Souls” last year:

Okay, after Watain, God Dethroned, Asphyx, and Pestilence, I know you weren’t expecting The Browning. We wrote about this band in a fairly recent MISCELLANY post (here). They’re from Dallas, Texas. They’ve become a guilty pleasure of mine, particularly the song called “Standing On the Edge”. We featured that song in the MISCELLANY post, and now the band have released an official video for the song. It’s a bunch of live performance footage of the band playing the song, with the album version of the song as the soundtrack.

In the MISCELLANY post, I wrote this:  “Are you ready for a marriage of techno and deathcore? Trance-dance, electronic body music, growly vocals, and breakdowns? Rammstein meets The Acacia Strain? The 2010 version of nü-metal?” That may not tempt you to watch this video, but I can’t help it — the damn song is so catchy I can’t resist.

Okay, enough fucking around. I’m gonna go do something productive. But it may take me a while to figure out what to do first. I might listen to some metal while I ponder the possibilities. Or maybe watch some more videos while I think about it.