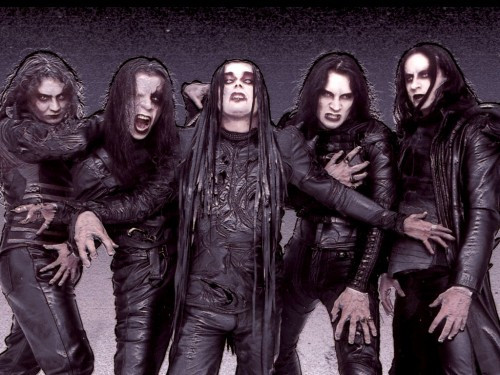 So, let’s move on to the songs, after the jump.

First, let’s start off with “Fear Of The Dark”.

Cradle Of Filth has covered Iron Maiden before, but it was “Hallowed Be Thy Name”. The version of “Fear Of The Dark” in question was actually done by Graveworm, an Italian band that’s been mentioned here at No Clean Singing before in comments – partly because of the covers that they’ve done. If you haven’t heard it before, or want to hear it again, here it is for your enjoyment.

Before moving on to the next song on the list, here’s Cradle Of Filth’s aforementioned cover of “Hallowed Be Thy Name” to chew on.

While I can kind of understand why “Fear Of The Dark” is credited to Cradle Of Filth, “Castlevania” is a bit of a stretch. Maybe it’s the gothic, symphonic sound, maybe it’s the vampire mythos that the band has explored. And considering the Castlevania series of games, it seems like it would work.

But it’s not Cradle Of Filth. “Castlevania” isn’t even the song’s name. It’s actually “Bloody Tears”, one of the oldest songs in the series, originally heard in Castlevania II: simon’s Quest.

This version is actually by Naoto Shibata PROJECT, playing metal rearrangements of music from Konami video games, long before Nobuo Uematsu did the same with Final Fantasy music as part of The Black Mages. However, like Square-Enix with The Black Mages albums (three so far, plus the soundtrack to Advent Children, which is pretty much The Black Mages but credited differently), Konami gave their blessing for these albums.

I apologize now for the brief nerd moment.

In case you want to hear the original, here you go…

Oh, in case Naoto Shibata’s name sounds familiar to any of you, he was the bassist for Anthem and was part of Loudness‘ lineup for a while.

That’s all for this inaugural installment of “That Wasn’t Them”. Hopefully you learned something – unless you already knew that Cradle Of Filth didn’t do these songs, then this obviously doesn’t apply to you. Knowing is half the power, or something like that.

7 Responses to “THAT WASN’T THEM – VOLUME 1: ROBBING THE CRADLE”