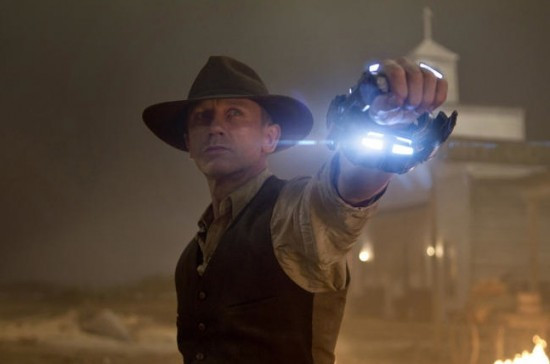 Catching up. That’s what I’m doing this weekend. In the place where I spent my vacation, the net connection was too slow for video-watching, so much of my catching up involves watching videos I wanted to see over the last 10 days but couldn’t. A slew of them were featured on a web site called TYWKIWDBI. It’s an absolutely awesome site, even though it’s got nothing to do with metal music. I don’t have the time to browse that site every day, but without fail, whenever I do, I find fascinating shit.

I hadn’t planned on adding any more NCS posts today, but I couldn’t resist sharing with you this collection of items I found on TYWKIWDBI over the last week. All but one of the items are videos — and all of them fit the profile of this NCS series — things that are fucking metal, even though they’re not music.

So, after the jump, we have for you a trailer about a forthcoming movie that looks awesome, a video of a parotta-maker which proves that practice does make perfect, some eye-popping images of an opium factory from 160 years ago, and a final, very eloquent video about you and me and our connection to the cosmos.  (all these rip-offs from TYWKIWDBI, plus some of our own embellishments, after the jump . . .)

And on top of all that, it doesn’t appear to be a Men In Black-style comedy, but a straight-faced action movie. The only disappointment is that it won’t be released until the summer of 2011. We hate waiting. Here’s the trailer. It’s fucking metal.  (For more info, the movie’s official site is here.)

Parotta is an Indian flatbread popular in the southern part of the sub-continent.  According to The Font of All Human Knowledge, “it is prepared with Maida and Oil/Ghee by beating the mixture into thin layers and later forming a round bread with the thin layers.” This very short video shows a man in a restaurant pounding the dough flat and throwing the pieces of parotta to the cook, who slaps it on a hot flat iron for cooking.  Keep your eyes open for the waiter who strolls through the air space of the flying dough.

We admire anyone who’s really good at what they do — pretty much regardless of what it is. This, we think, is fucking metal.

There’s a place in London called The Wellcome Collection, which appears to be a type of exhibition hall, free to visitors, that explores the connections between medicine, life and art in the past, present and future. Currently featured at The Wellcome Collection is an exhibition called “High Society”, which explores the history of mind-altering drugs. The web site for that exhibition includes numerous interesting images, including the two we’re showing you below.

They’re from a series of lithographs by W. S. Sherwill showing an opium factory in Patna, India, in about 1850.  The prints show the different stages in the processing of opium at the factory in Patna, which was the centrer of the British East India Company’s opium plantations in Bengal. The raw opium was formed into a ball about 3½ pounds in weight and wrapped in poppy petals to protect it from damage.

The balls were then dried on shelves and boxed into chests each containing 25-40 balls before shipping to China and Europe. The first image below is the “stacking room” and the bottom image is the “drying room.” People in the mid-1800s obviously smoked a lot of fucking opium. We’re not trying to praise or glorify drug use — though we don’t mind it either. Good or bad, we think the scale of this opium operation is fucking metal. 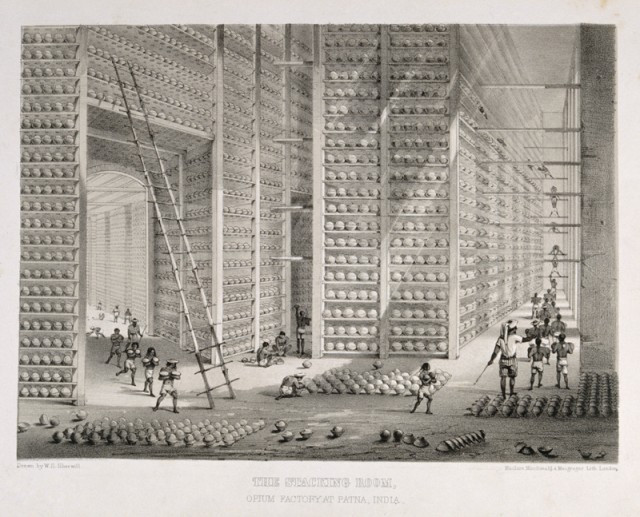 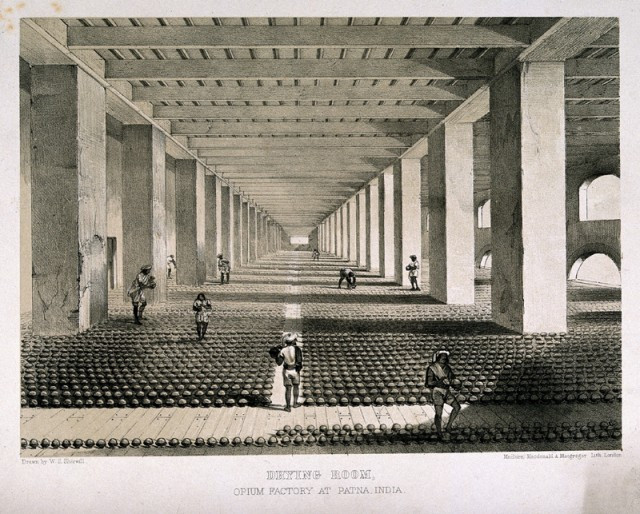 The video below will take 4:45 of your time. In our most humble opinion, it’s 4:45 well-spent. It’s a meditation on the cosmos, and the connection between each of us and the vast star-field in which we live. There may not be any science in it that’s new to you (though there might be), but the narration is fucking metal. And so are the ideas it expresses. Check it out:

That’s all we’ve got for this installment of THAT’S METAL!. Enjoy the rest of your fucking Saturday.