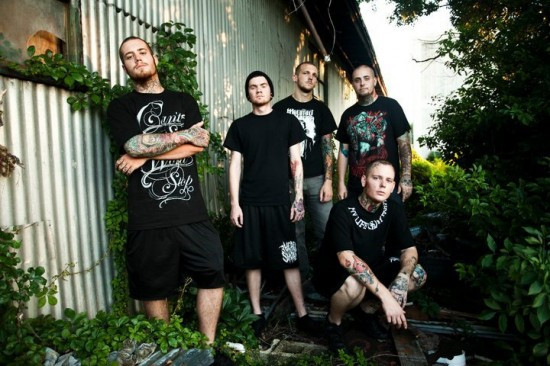 Yesterday was the 21st birthday of NCS co-founder and occasional contributor to this site, IntoTheDarkness. I saw him all-too-briefly last night before he embarked on some first-time-legal-debauchery with his buds and bud-esses (all badass, no doubt). I hope he’s alive today to see this tribute to his legal adulthood.

As you regular readers know, ITD is our resident deathcore maven. Though his tastes run in other directions, too (for example, he’s the one who finally pushed me to listen to Cloudkicker and Dan Dankmeyer), he still dearly loves his deathcore and knows the genre pretty damned well. The day before his birthday, as I was on my way back to Seattle from vacation, I got this text message from him: “I might have a new favorite deathcore band. check out king conquer’s new album. HOLY SHIT.” (As I’ve noted before, ITD doesn’t bother with capitalization except for emphasis.)

So, in honor of ITD’s birthday, I did check out the debut album from King Conquer without delay. It will be officially released on November 23 on Mediaskare Records and it’s called America’s Most Haunted. And . . . well . . . holy shit, indeed.

King Conquer are a howling horde of barbarians on a rampage, swinging downtuned axes and blast-beat mallets straight for your head — but there’s more to their musical attack than the usual blunt instruments. This band is one of the most promising new purveyors of hardcore-influenced death metal we’ve heard this year. (more after the jump, including some King Conquer music . . .) 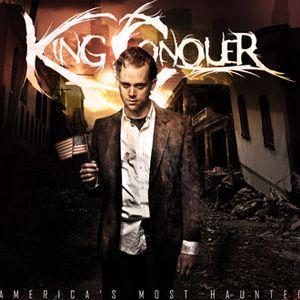 King Conquer are from Naples, Florida. The band was formed in 2002 by brothers Adam Whited (bass) and Chris Whited (drums and hardcore vocals). There have been some changes in the remainder of the members over time, but it appears the band’s line-up has now solidified. Before the forthcoming label debut, King Conquer produced 2 EPs (2008’s Welcome to Hell and 2009’s Decomposing Normality), which we haven’t heard.

But we’re sure glad we’ve now heard America’s Most Haunted. After a brief, cacophonous intro full of shrieking, pulsating noise (“Overdraft”), the band tells you what you’re in for with “6 Gallon Gasoline Stomach”. It’s downtuned distortion to the max, a howling wind of squealing, grinding, and groaning guitars and a hellish choir of Chris Whited’s hardcore shrieking and James Mislow’s cavernously low death-metal gutturals. And yes, the breakdowns detonate like an artillery barrage. 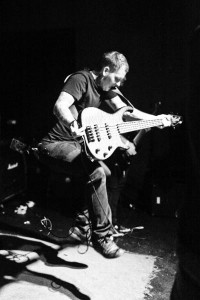 There’s more of the same on “No Regret”, but that track includes a few bars of melodic lead guitar. “Better Luck Next Time” features more subterranean riffing and hammer-blast drumming, with a memorable lead guitar line that just oozes gore.

“Wasted Potential” starts with a mournful guitar lead and then rapidly accelerates into another aural assault, with darting riffs and massive breakdowns — but that mournful lead riff reappears periodically and then carries the song to its close.

Just when you begin to think you’ve got the lay of the land mapped out pretty well, “Frequencies” takes you surprisingly off course. It’s a crawl-paced, experimental, instrumental interlude — but it brings no peace: a discordant combination of effect-laden guitar noise and dark chords, it sounds like a different band that dwells in a sludgier region of Hell. This twisted baby turned out to be one of our favorite tracks on the album. 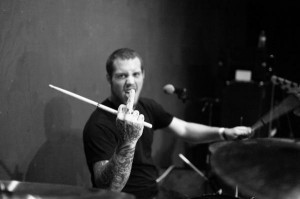 “Trash Can Alley” springs an attention-grabbing intro — and then it’s over the top of the trench and hauling ass into No Man’s Land again, spraying machine-gun fire, grinding like tank treads over broken corpses, and detonating clouds of poison gas. The title track follows, and it’s more merciless bludgeoning, but with a tremolo-picked, minor-key guitar lead that reinforces the song’s doomed atmosphere; these ghosts clearly aren’t happy.

“Turmoil Before Enlightenment” requires a bit of back-story. The band’s co-founder and bassist, Adam Whited, has Multiple Sclerosis, a disease my family knows something about. This song, on which Adam also provides vocals, is about his struggle with the disease. It erupts from the start with down-tuned slamming and a swarming guitar lead, and proceeds to crush with unbridled passion. (Adam, btw, is married and raising two kids, in addition to living with MS and fighting to make his way in the music biz.) 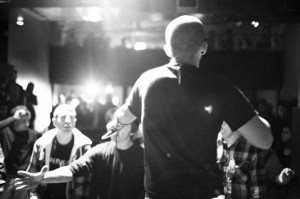 “Unborn Existence” follows, with more tremolo-picked chords to accompany the double-kicks and palm-muted bludgeoning, paving the way to breakdown city — and it’s a pulverizing road trip. And then King Conqueror throws another curve ball:

“Return To Sender” is another instrumental track. It begins with a slow, clanging guitar arpeggio and eventually segues into a dual acoustic-guitar melody — with periodic drum detonations and a concluding passage that ramps up to a bass-heavy machine-gun attack and the ominous tick-tock of a countdown. It sounds no more hopeful than anything else on the album, but it’s a refreshing change of execution that’s quite appealing, and perhaps more than any other song on the album, it proves that these dudes have soul and chops, as well as headstrong brutality, going for them. 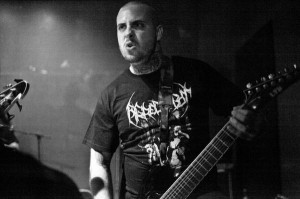 In the next song, “3 Axle”, a catchy little riff explodes into another burst of axe-swinging mayhem. It sounds like a full-throated chopper belching clouds of oily black smoke — a machine that runs pretty fucking rough, but still delivers a sweet ride. (And this one’s got some djenty guitar hammering going on, too.)

Which brings us to the closing track. You know we have to pick one song for you to hear yourselves, because mere words (particularly ours) can only go so far in describing what any music sounds like. So, this one is it. It’s a fucking bruiser, with some catchy riffing and some skull-cleaving breakdowns. 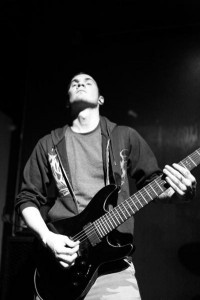 If you’re a fan of deathcore, we can pretty much guarantee you’re going to love this album. If you’re not a fan, there’s probably not much here that will change your mind. If you’re in some gray area between the two, then check out this band. Our instincts tell us that King Conquer are going to light up the scene like an eruption of flares in a night sky.

You can order America’s Most Haunted as a CD at this location, and as a digital download from both iTunes and Amazon MP3. For more info about the band, check out this interview with guitarist Tony Reid, and/or visit them on Facebook here or on MySpace at this location.

King Conquer will be touring in December with As Blood Runs Black, Thick As Blood, Burning the Masses, In the Midst of Lions, and I the Breather (that’s a damn strong line-up, btw). Here are the dates and places: 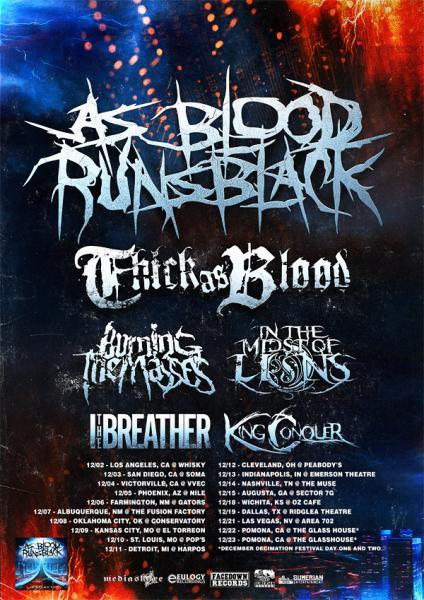