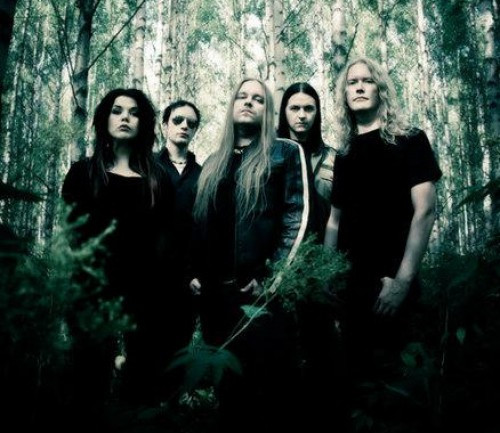 We’re not doing a Finland Tribute Week post today because we’re working on the final two posts in the series for tomorrow and Friday. We tried to bribe your patience with a THAT’S METAL! post. Can’t hurt to sweeten the bribe, though. So here’s news about a new song from The Man-Eating Tree.

The Man-Eating Tree are from Finland, so we do have that connection to our ongoing tribute. They feature former Sentenced drummer Vesa Ranta plus current or former members of Poisonblack, Reflexion, and Embraze. We first listened to their music for a MISCELLANY post we did back in August (here), and liked what we heard, even though their brand of atmospheric, cleanly sung metal isn’t what we usually consume. When we started the Finland tribute series, we found out that a lot of you really like this band.

So, you might be interested to know that Century Media is making available a new song from the band available for free download. It’s called “Vultures”, and it post-dates the music recorded for the band’s September 2010 debut, Vines. If you want to get it, go here. But be forewarned — you have to share a link on Facebook or Twitter to get the download, i.e., help Century Media publicize the band. The download link will be active until December 31.

If you’re not crazy about the terms of exchange for that download, just wait a few hours, and someone will surely put the track up on YouTube. In the meantime, all you tree-like man-eaters out there might like the video we’ve got after the jump.

This video is fan-filmed footage of The Man-Eating Tree performing the song “Of Birth For Passing” on November 9, 2010 at Musikzentrum in Hannover, Germany. The quality of the video is decent, it’s a pretty song, and Tuomas Tuominen can definitely sing. We would like this even better if it were less pretty and Tuominen were growling like a hungry badger. 🙂

10 Responses to “THE MAN-EATING TREE: A NEW SONG”