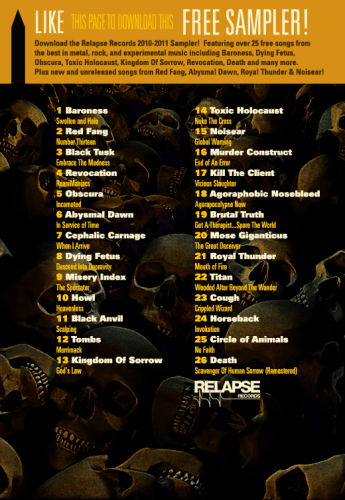 Just in case that fat fuck in the red suit didn’t leave you anything under the tree, which of course he didn’t because he’s just a figment of your imagination, we have a little metal gift for you. Actually, it’s not really our gift at all. It’s a holiday gift from Relapse Records.

Actually, it’s not exactly a gift, because you have to be on Facebook to get it, and you have to “like” Relapse Records in order to get the gift.

Actually, that’s not really true either. More about that in a minute.

Anyway, this Relapse “gift” has been on offer since Tuesday, but we just saw it. It’s a sampler consisting of 26 songs by those bands whose names are listed up above, and four of those songs are either new or previously unreleased (the ones from Red Fang, Abysmal Dawn, Royal Thunder, and Noisear). There’s a lot of really good music on this comp, in a multitude of different styles.

I’m on Facebook, and I don’t mind seeing Relapse posts about what’s going on with the bands they’ve signed, so I was happy to “like” the Relapse page in order to get the download. And it turns out the download is just a Dropbox link. By now, someone has surely posted that link somewhere for people who aren’t on Facebook or who don’t want to “like” Relapse to get the music. But me? I’m feeling grateful for the sampler, and so I’ll just send you to the Facebook page where you can do what Relapse wants you to do to get the music.

We’ll have our own Christmas Day gifts for you in the next post — a special edition of THAT’S METAL! Rock on, motherfuckers.