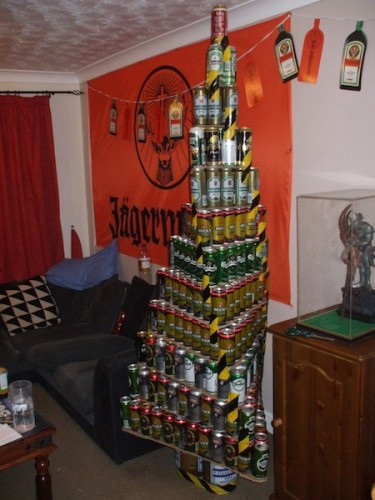 Wait a minute, that was pretty rude. Let’s start this again.

To all of you who look forward to Christmas and will be celebrating the day with your families in a spirit of cheer and good will to all, Merry Christmas and have a safe and joyous holiday.

To everyone else, Merry fucking Christmas. We have for you a special edition of THAT’S METAL!.

Yes, that blessed day is finally upon us — blessed, in our minds, because it will now be another year before we have to endure all the shitty holiday music and non-stop force-feeding of advertisements for the gifts we should buy family members, whether we want to be in the same family with them or not.

To help you endure the day, we have just a few items, to really help get you in the proper holiday spirit of endurance: A heart-warming story about creativity with beer cans; a couple of videos that really bring the fucking Christmas cheer; and our own, specially selected NCS version of holiday carols (you know what we mean — blasphemous headbanging carols, the kind you won’t hear at the mall or in any church).

Enjoy all our Christmas presents for you . . . after the jump. And don’t eat the yellow snow.

About a month ago, we published a rant about the holiday season called FUCK CHRISTMAS! Got some good comments on that one, including this from NCS reader “Bob McBobbob”: 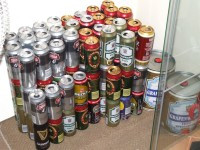 Loving the rant, anything that was special about Christmas as a child is soon removed by it being relentlessly shoved down your throat as an adult. However I can’t say I hate the season, it brings me all my close friends for together for one hell of a piss up on Christmas Eve and consequently I get to miss Christmas day by nursing a hangover, honestly I can’t think of what I would rather be doing.
Plus note, I’m making a Christmas Tree out of beer can’s and Kegs, it’s going to be about 2 meters high!

That beer-can Christmas tree just sounded like an awesome idea, so I asked Bob to send pics when the tree was fully grown.  And he did, along with this message: 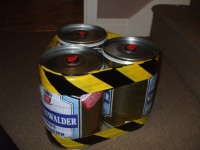 As promised, a picture of the beer can tree in all it’s might!

Awesome. I can’t imagine a metaphor for pride any better than that one, can you? And the photos are righteous, too. In addition to the one that graces the top of this post (the Jager banner in the background adds a nice touch), we’ve picked a few more that you’ll see at the end of this post. Thank you Bob! Hope your hangover today isn’t too brutal.

Until recently, I was proud to say that I’d never listened to Marilyn Manson. Not even one second of one song. A guy who prances around the stage in heavy make-up wearing a custom-made corset and platform boots with his ass cheeks hanging out? Just didn’t seem like the music would be my thang. Most of the bands I like, the dudes look like they haven’t bathed since they were 16 or had a decent meal since the last karaoke night at the homeless shelter.

In fact, to me, getting cornholed with a marlin spike seemed like a more attractive option than listening to Marilyn Manson.

But a couple days ago, I relented. I watched this video of Marilyn Manson performing a little Christmas ditty. And you know what? The music wasn’t as bad as I thought it would be. I may have to give Marilyn Manson a second chance. What do you think?

(Thanks to Jesper Zuretti for the link to this video.)

So, this series is called “THAT’S METAL!” – BUT IT’S NOT MUSIC. Which means that we focus on items that aren’t music, but still make us say, “Fuck! That’s metal!” What’s on this next video is not music. Uh-uh. No way. Not music. But it is metal. Hang in there at least until the elf starts rapping. (And thanks to NCS reader and frequent poster Aaron for the link to this gut-buster.)

And now for some Christmas carols, NCS-style. 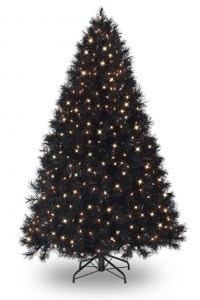 By way of background, we’ve been struggling to come up with a manageable list of 2010’s most infectious extreme metal songs. Coming up with a list hasn’t been difficult — but winnowing down the list so that it’s shorter than the size of a phone book as been tough. We’re still not finished, even though we promised ourselves we’d start rolling out the songs for you on Monday. But we’re making headway. Though we probably won’t start rolling out the jams ’til Tuesday.

Unfortunately, the winnowing process has left some really awesome songs on the cutting room floor — not because the songs are bad, but because we’ve got to shorten the list. The songs we’ve had to chop off the list are awesome tunes. In fact, they’re actually better songs than some which will make the final list, but they’re just not quite infectious enough to muster the support of all three of your NCS collaborators.

Still, we hate to abandon them completely. So, we’ve picked a small group of the also-rans to include in this post because they just seemed like the right kind of music to be playing at NCS on this blessed fucking day.

Now, fill up your glasses with eggnog, doctor the nog with a healthy splash of your favorite whiskey, raise them high, and let’s all join our voices and sing along.

Autopsy: My Corpse Shall Rise

And finally, a few more pics from Bob McBobbob showing the construction of his beer can tree. This is metal — literally. 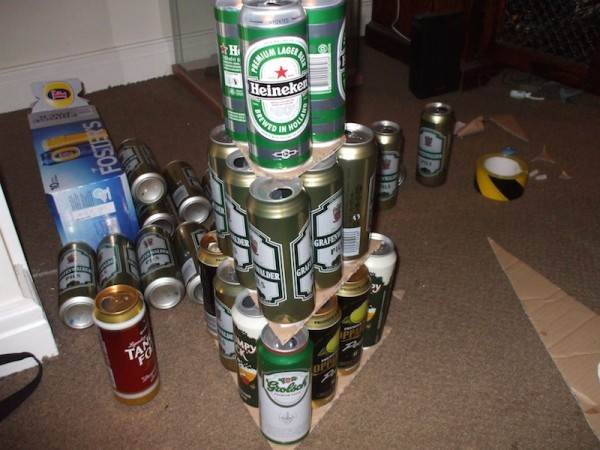 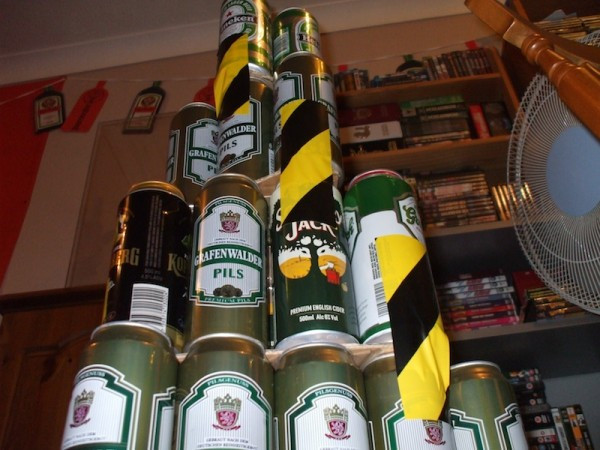 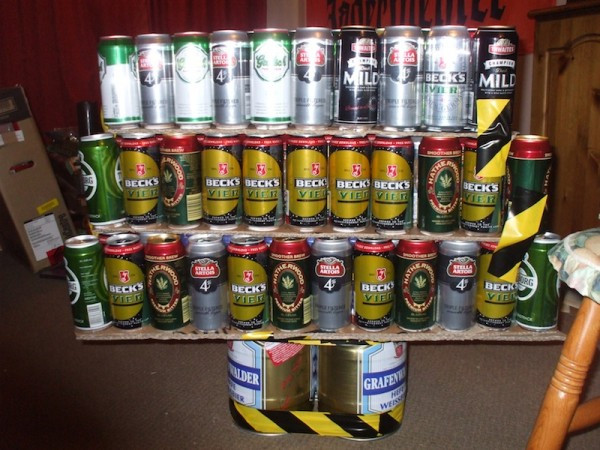 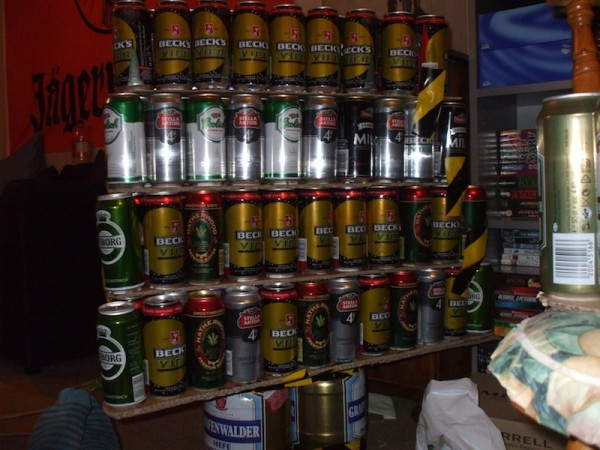 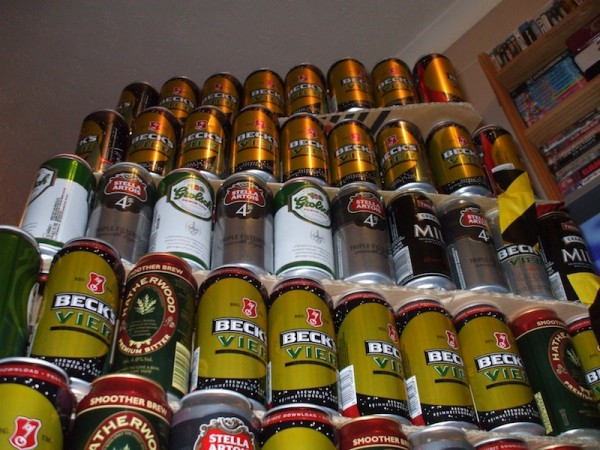 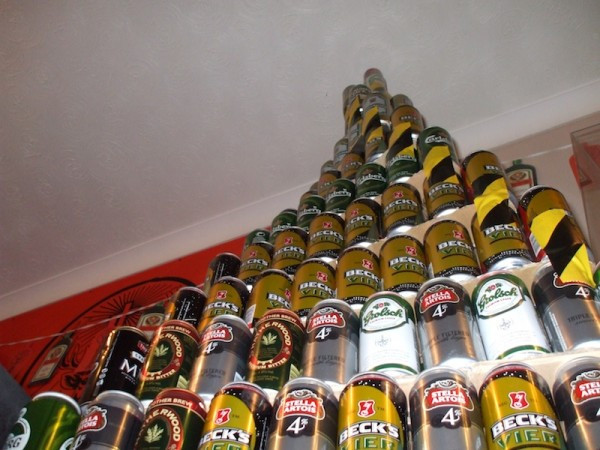 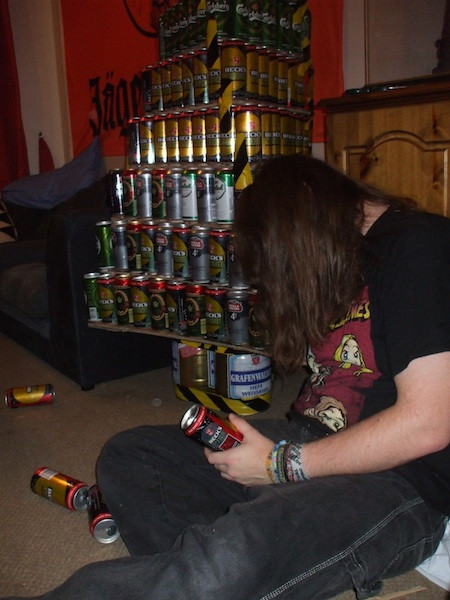