Out here in the euphemistically named Emerald City (which is just shades of grey right now), we’re on the other side of the continent from Long Island, New York. But we can hear the explosion of metal loud and clear. First, one impressive metal band, then another, then another. Today’s review is about our latest Long Island discovery.

We first came across Praetorian while browsing new music for a MISCELLANY post we put up in early November (here). We liked the one song we heard from the band’s 2010 EP (To Dwell In Darkness) and vowed that we’d listen to the rest of the EP and write a proper review — and then got side-tracked, as often happens around here. Sometimes we get back on track. In this case, it only took two months.

To Dwell In Darkness is an ambitious work of symphonic death metal — especially ambitious for a debut release by a young band — but it’s an auspicious start. The six songs on To Dwell In Darkness are a manifestation of considerable talent, both in the intricate songcraft and in the synchronized execution. If you’re a fan of bands like Keep of Kalessin and Dissection, Praetorian are worth keeping your eyes on.  (more after the jump . . .) 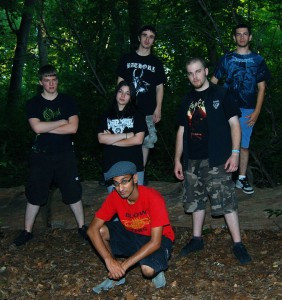 The EP begins with the title track — a relatively brief piano instrumental with an orchestral keyboard accompaniment. It’s quiet and contemplative. It foreshadows that keyboards will be a fixture of the music and that this band has an ear for melody, but it hardly prepares the listener for the dense onslaught to come.

The following track, “Enticing the Serpent”, is more indicative of where the band’s interests lie. It jump-starts with a flickering guitar lead and the mid-range death-metal vocals that dominate the rest of the songs — the kind that sound like the singer’s vocal chords have been scraped with razors. The introduction gives way to a bombastic instrumental shift that gets your head banging and includes the first of many stylish guitar solos on the album.

“Hands of Kali” is a whirling dervish of a song with folk-metal influences (in my mind, it triggered memories of Finntroll‘s humppa-style rhythms). On this track, the swirling keyboards and tremolo-picked guitar leads form an effective and infectious partnership, and a bit more than mid-way through its length there’s an athletic, fire-breathing guitar solo that follows a brief down-tempo instrumental passage. On top of all that, the song finishes with a beautiful, ambient, piano-and-synth melody. We told you this band were ambitious.

But those ambitions become even more evident in the last three tracks. They range in length from 7:22 to 8:24. They’re symphonic in their style not only because of the instrumental arrangements but also because the songs are constructed in movements.

“Black Despair” proceeds from grinding buzzsaw guitars, to swirling keyboards and crashing guitar chords with tremolo leads, to a full stop, followed by a quieter instrumental passage and then an acetylene-fueled piece of guitar shred and a burst of prog-metal inventiveness. 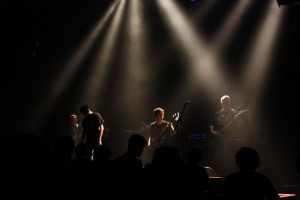 “Fallacy” launches with a dramatic keyboard announcement and an immediately catchy melody. It includes another extended instrumental break with a cool, clanging guitar lead, dual-guitar harmonics, and a ramped-up, anthemic finish with a wonderful piano outro.

And “Slain” is a hell of a closer. A nice thumping riff establishes the rhythm, and then the lead guitar and keyboards swirl around it with variations on the theme, like a pack of jackals circling a carcass. As the song progresses, we get jolting bursts of guitar notes and intricate interplay between all the instruments, an acoustic guitar interlude accompanied by ambient keyboard, and yet another head-spinning axe solo. Throughout, the vocals deliver dramatic pronouncements, like a demon at the pulpit.

In some respects, the band’s ambitions produced excess in these three long songs, with some of the repeating verse passages (with vocals) coming perilously close to monotony. Sometimes, less is more, and in our humble opinion, tighter song construction would have improved these tracks.

Having said that, the instrumental segments in these songs are probably the highlights of the album — particularly, the completely sweet guitar solos — and we would have been quite happy to hear them go on longer.

To return to where we started: Fans of hard-edged symphonic metal with a black streak running through it will find a lot to like on Praetorian’s debut. It holds the promise of even greater things to come.

Oh yeah — it doesn’t hurt that the EP cover is a hot-shit piece of artwork by Indonesian artist “Oik Wasfuk” of Nothing Sacred artworks (her MySpace page is here).

To Dwell In Darkness is still available for free download at Praetorian’s Bandcamp page. And you can get a sense of the music by listening to this:

PRAETORIAN NEWS: If you’re within striking distance of Brooklyn, you should make plans to be at Club Europa on February 4, where Praetorian will be sharing the stage with Gwynbleidd (who are awesome) and two other bands we haven’t yet heard — Satevis, and Fin’amor. Tickets are available here. 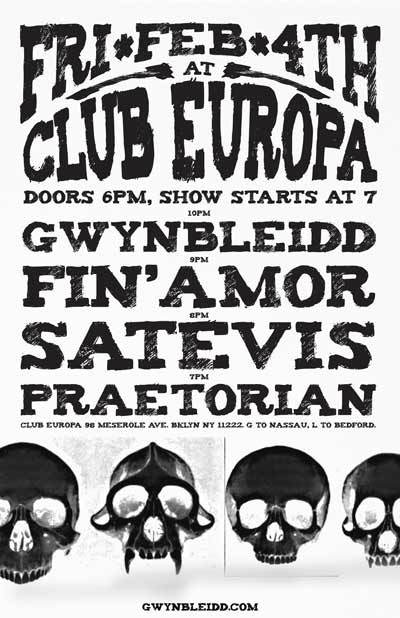