Today we reach the end of the line — the last two songs on our MOST INFECTIOUS list. Our list this year was three times as long as our 2009 list, but even so there were lots of other worthy candidates we omitted — including many recommendations we got from lots of you. Truth be told, 2010 was filled with great metal releases. Picking the catchiest songs wasn’t easy, and undoubtedly we fucked it up by leaving off some winners. But hey — we fuck up a lot.

No fucking up today, though. Our last two songs are from two blazingly hot bands who produced smoking hot cauldrons of metal in 2010. We saved them for the finale on purpose because they’re two particular favorites of ours. Both bands are from Italy and when their 2010 releases were recorded, they shared a common member (though no longer). Let’s get to it.

We hope our list included at least a few surprises for you, but this isn’t likely to be one of them. Out of all the bands we could have fantasized about paying to be at our beck and call once we get the jillions of dollars that African philanthropists have promised us, this is the one we picked. (more after the jump, including the songs . . .) 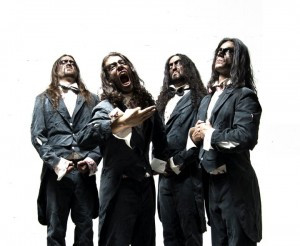 Fleshgod Apocalypse didn’t release a full-length album last year, only an EP — which is like saying that the Mona Lisa is “only” a painting.  As we said in our extended review of the EP, “MAFIA will explode your head. If you liked this band’s debut album, Oracles, you will be mighty pleased by the new one. And if you haven’t yet checked out Fleshgod Apocalypse, don’t put it off any longer.  They’re putting out music that’s not quite like anything else you’ve heard.”

We praised every song on the EP, and said this about one in particular: “‘Thru Our Scars’ launches with just a whisp of classical violin and then erupts like a bottle rocket on the Fourth of July: Blazing guitar riffs, Francesco Paoli’s maniacally fast (but tightly controlled) drumming, Tommaso Riccardi’s staccato gutturals and Paolo Rossi’s soaring clean vocals — and all that joined to a beautifully crafted rhythmic structure that just worms its way deeply into your cerebrum. This baby is already on our short list for the most infectious extreme metal songs of 2010.”

The year is over, and that song is still on the list. If by some remote chance you still haven’t heard it, now’s your chance:

Fleshgod Apocalypse: Thru Our Scars

P.S. As we reported here, we should be seeing a new, actually full-length album from FA before this year is over. 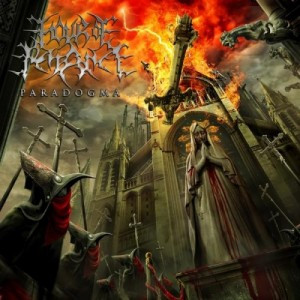 2010 was a year of triumph and change for Hour of Penance. The band’s fourth album, Paradogma, was their best yet, and in our opinion one of the best death-metal albums of the year. When we reviewed it in April (here), we wrote that the songs were “creatively structured to feed your need for brutality while striking that primordial chord in your brain stem that makes you want to jump and move. . . . Paradogma swallows you up in a miasma of dark fury that seethes in its intensity, yet infects you with hooks and melodies that will cause the songs to re-play in your head long after the music stops.”

But the year also brought significant changes for the band. In May, a still murky incident at a club in Alicante, Spain led to the arrest of drummer Mauro Mercurio and his expulsion from the band. That appeared to be the catalyst for Francesco Paoli’s departure as well, though it appears he had been planning to leave in any event, given the increasing time demands of Fleshgod Apocalypse.  We wrote about all these events here (and in other posts linked at that location).

That left guitarist Giulio Moschini and bassist Silvano Leone with the daunting task of attempting to re-form HoP and keep it going.  Amazingly, they succeeded, recruiting Simone “Arconda” Piras to replace Mercurio behind the kit and vocalist Paolo Pieri (Aborym, Shoreborn, Promaetheus Unbound, Malfeitor) — and Hour of Penance have been touring again.

Of all the distinctive songs on Paradogma, there’s one we think is the most infectious. From our album review: “The final track, ‘Apotheosis,’ also departs from the style of most other songs on the album, and while it’s probably not our favorite (if it were even possible to pick a favorite), it probably is the most infectious. As the volume builds at the start, an almost industrial-style rhythm is established, and then the music shifts down into a slower pace as Paoli begins to shout out angry words. Following a short bridge, Moschini starts hammering out a prolonged, repetitive, massively compulsive riff, Mercurio goes crazy behind the kit, and the sound of bells chime in the background. It leaves you wanting more.”

It’s a near-perfect end to our MOST INFECTIOUS list. Just wait until the 2:25 mark, when that irresistable riff your hear at the beginning starts hammering again. It will carry you, with head banging, through the end of the song, right through the end of our list, and right on into the bright new year of metal ahead of us.

P.S. The lyrics to “Apotheosis” are in Latin. It’s an edited version of The Lord’s Prayer.  Just a few words have been changed, but those clever revisions flip the meaning of the prayer on its head, converting it to a celebration of reason and an appeal to deliverance — from god.

And now here’s the complete list of the 30 extreme metal songs released last year that we thought were the most infectious. You can read about and listen to all of them by clicking the Category link on this page called MOST INFECTIOUS SONGS-2010: