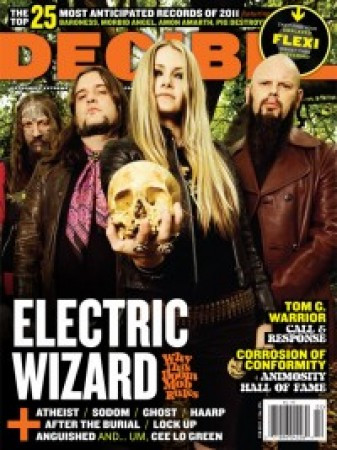 I got home from my fucking day job last night and what do you think was waiting in my mailbox — other than more fucking bills?  No, it wasn’t cash from Hong Kong — not yet (see the post below this one). It was the February issue of DECIBEL magazine (the only metal mag worth reading any more).  And what do you think was inside the magazine? Well, lots of stuff, of course, but what immediately caught my eye was the magazine’s list of the Top 25 Most Anticipated Albums of 2011.

We try to keep up with news about forthcoming releases. In fact, we run a monthly list that collects news items about albums headed our way. But the DECIBEL list still included some albums we hadn’t yet heard about. Fuck, we hadn’t even heard of some of these bands. Beyond that, of course, is the question whether the albums on the list belong on the list, and whether other deserving releases were omitted. We’re curious what you think about those issues, so leave us some comments please.

Now, here are a few bands who we know have albums on the way this year that we’re looking forward to, but who didn’t make the Decibel Top 25 list:

And as DECIBEL’s Rod Smith wrote in his introduction to the magazine’s line-up, “Twenty-five bucks says we all end the year with brains blown out by at least this many unforeseen releases.”

We ain’t taking that bet, because surely that prediction will come true. Looks to be a brutal, skull-cleaving year of metal ahead.

What are you looking forward to hearing? And what do you think of DECIBEL’s list?

UPDATE: In addition to identifying their Top 25 Most Anticipated albums, DECIBEL’s current issue also includes a near-exhaustive list of all albums scheduled for release in 2011 of which DECIBEL is currently aware.  We haven’t taken the time to count the number, but would estimate it’s in the range of 450 releases.  To see that list, use this link.