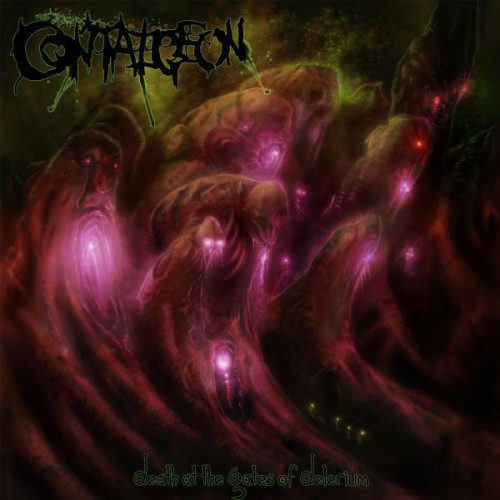 New albums have been stacking up here at NCS at a rapid pace, and lots of gems have been sparkling in that pile. However, it’s become obvious that as much as we’d like to write full reviews of all those gems, there just ain’t enough fucking time. So, rather than just give up and say nothing, over the next four days we’re going to write briefly about four of the albums that have grabbed our attention in the last couple of weeks.

Don’t be misled by the brevity of our verbiage — these albums are worth your close attention, and there should be something in here to almost everyone’s liking, because the genres in play cover a goodly spectrum of extreme metal. For today, we have something for those of you asylum-dwellers who like your metal especially brutal, scalding, sometimes dirge-like, and gloriously, atmospherically evil from end to end.

One of our readers highly recommended Contaigeon to us within the last 60 days. I usually make a note of where music tips come from so we can provide approprite acknowledgments, but I failed do it this time, and now I’ll be fucked if I can remember. Whoever you are out there, I owe you a big thank-you because this band is just crashingly brilliant.  (more after the jump . . .)

Contaigeon is a death metal band from the UK whose debut album, Death At the Gates of Delirium, was released last June by Works of Ein (a pay-what-you-please “un-label” that pleasingly doesn’t give a shit). DECIBEL magazine carried Etan Rosenbloom’s review of the album in last October’s issue. He gave it an 8 out of 10 rating, made special note of “the album’s greatest asset” — “some of the sickest guitar tones since the glory days of Incantation” — and summed up the work as “one fuzzed-out, scouring earfuck”.

I second the notion. Death At the Gates of Delirium brought to mind undersea images of that BP oil spill in the Gulf of Mexico — thick clouds of oily putrescence jetting out of the busted well head, some of it eventually settling into a congealing mass on the bottom, slowly drifting in the current as it extinguishes squirming life in its path.

Contaigeon’s downtuned guitars relentlessly grind, or turn into sludgy monoliths of sound, or jet like an ignited fuel leak, or indulge in feedback-laced drones (as on the mind-bending and inventively spelled “Curroption”). The drums veer from unconstrained obliteration to remorseless pounding. The vocals are an unmitigated roaring wave of gore-drenched nastiness.

Think of Autopsy with the putridity dial turned further into the red or Morbid Angel except in a more advanced stage of dementia. Contaigeon dishes up a boiling cauldron of brutality, spiced with an unexpected peppering of drone and doom. Amazingly, it tastes pretty fucking sweet. Check out this sample:

You can download Contaigeon’s debut album for free at their Bandcamp page (here).

P.S. We think the album art for Contaigeon is awesome — and the cover art at the top of this post is only a part of the whole. Below, we have more images, representing the four members of the band, in this order: Archeon (vocals/guitars); Rahab (guitars); Carrious (drums); and Verminion (bass). And as an introduction, here’s what Rahab said in a very interesting, unusually articulate interview he gave to Teeth of the Divine:

There is a union of media that seems to be sadly missing these days, where album art and music combine to create something beyond the whole and that’s something that is vitally important for the kind of area we inhabit. I guess that comes in part from the decline of the physical format, but still very little thought seems to go into the packaging of the physical product. There seems to be no attempt to move outside of tired cliché and downright bad “that’ll do” Photoshop abominations. Not that PS is inherently bad, it’s just a tool and therefore only as good or bad as the person using it, just like digital sound recording while I’m about the subject. 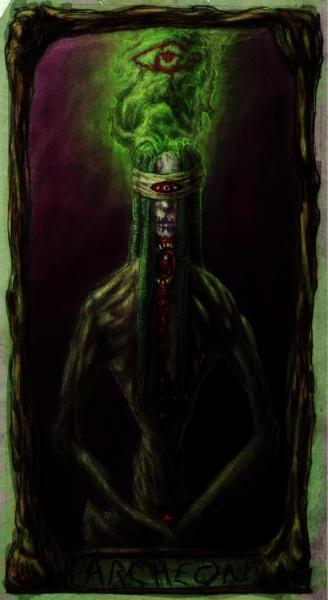 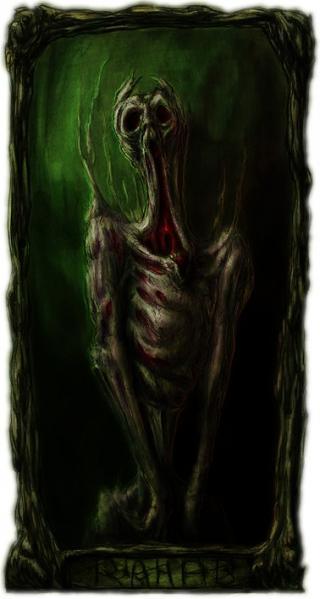 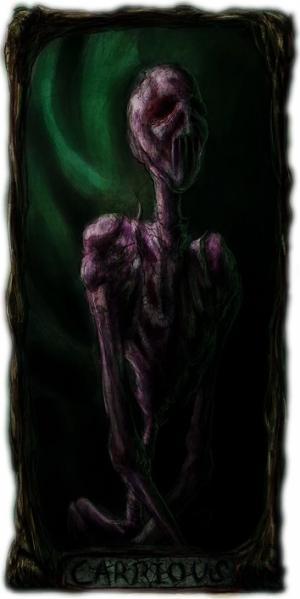 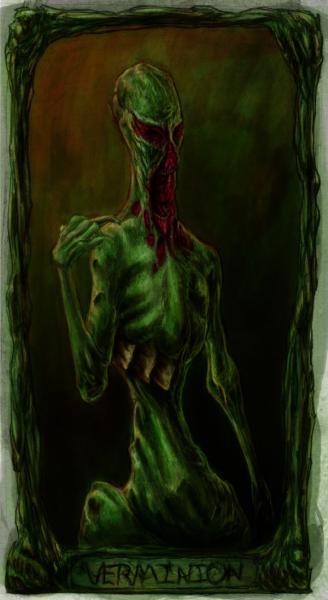