Yeah, I know I’m taxing your attention span with our third post of the day, but I continue to see eye-catching items and just can’t resist. But I will keep this one short and sweet. It’s about breaking news from three of our favorite bands.

You’re looking at Item One: The just-released cover art for Amon Amarth‘s new album, Surtur Rising. Talk about a fucking metal album cover. The art is by Tom Thiel. The album will be released in North America on March 29, 2011 via Metal Blade Records.

The track listing for the album is out, too, and includes such juicy titles as “Destroyer of the Universe”, “Live Without Regrets”, “For Victory Or Death”, and my favorite: “A Beast Am I”. I’m expecting epic levels of epicness.

Did you know that Surtur was (is?) the leader of the fire giants of Muspelheim (“flame land”) and the oldest being in the nine worlds of Norse mythology? Oh, fuck me, sorry about that; I said I would keep this short. On to the next item (after the jump).

The next item is another piece of cover art, along with the just-announced title, for Arch Enemy‘s next album, which is due for release in May on Century Media.  Check it out: 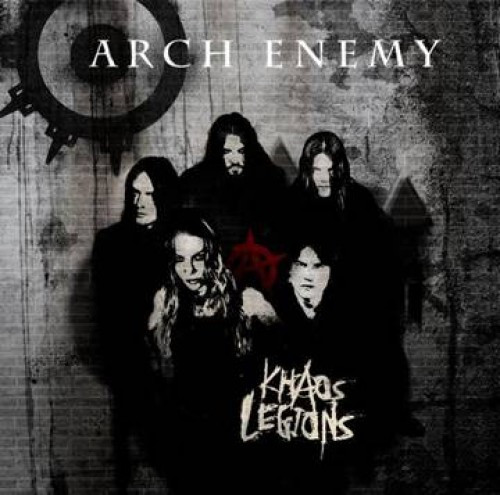 Arch Enemy is currently recording Khaos Legions in the Sweet Spot Studio facilities in the south of Sweden, with the engineering and mixing being orchestrated by Rickard Bengtsson (who produced 2005’s Doomsday Machine). I’m expecting epic levels of epicness. 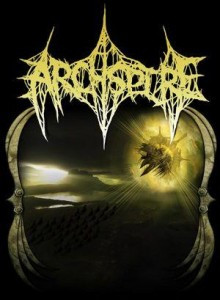 A month ago we wrote about an unsigned Vancouver band called Archspire and their four-song EP in one of our MISCELLANY columns (here), with these words: “This is a truly eye-popping convulsion of tech-death, with schizophrenic rhythms, astounding technical riffing and drumwork, and tiny threads of reappearing melody that stitch the songs together into cohesive wholes. And I’m not sure I’ve ever heard a death-metal vocalist bark out the lyrics faster than Archspire’s . . . . This is most definitely a band to keep your eyes on; you will hear more about them.”

Well, sure enough, we just saw the official confirmation that Archspire has been signed by French label Trendkill Recordings. It wasn’t entirely unexpected, given that in the main photo accompanying our recent interview of Trendkill’s Virgil Palazzolo, Virgil was wearing an Archspire band shirt. Still, it’s a sweet piece of news.

Archspire has finished recording a full-length album called All Shall Align, and it will be out in digital format on April 7, 2011, followed by a limited digipack CD edition on April 14 in Europe and April 21 in the U.S. and Canada. Pre-orders for a limited digipack CD and very limited CD/Shirt bundle are available as of today at this location.