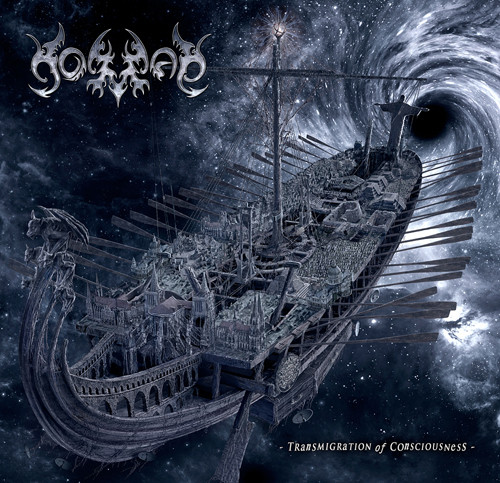 It’s time for another MISCELLANY post. Actually, it’s way past time. If I had any hope of checking out all the bands I’d like to check out, I should be doing this every day.

Most of you know the rules: We keep a running list of bands to check out, and I impulsively pick names from the list and listen to a song or two, and dutifully report my impressions — while giving you the chance to hear exactly what I heard, because I’m not high enough on my own opinions to think you will — or should — just take my word for it.

In this edition of MISCELLANY, I’ve got three finds for you — and holy fuck, are there some prize-wnners in this group. Before I sampled the tunage of these three bands, I didn’t know what to expect. In the first two cases, it was a spine shuddering experience — the kind of music that makes me proud to be a metalhead. A true, motherfucking bonanza. In the third case, the music was just so demented that I found myself strongly attracted against my better instincts. Shit, to be brutally honest, it makes me proud to be a metalhead, too!

I can be faulted for an excess of exuberance, but to the extent I’m capable of being objective, I don’t think I’m off the mark on the first two bands. In the third case, I may have simply lost all my bearings. But you be the judge:

From Poland, a band called Nomad (which includes Behemoth guitarist Seth); from Massachusetts, a band called Sentinel; and from the Czech Republic, a band called . . . gulp . . . Mincing Fury and Guttural Clamour of Queer Decay.  (my listening log, and the songs for you to hear yourselves, follow after the jump . . .) 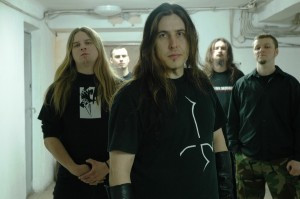 I read about this band not long ago in a press release from a Polish label/distributor called Witching Hour Productions. To date, Nomad has released one demo, one EP, and three full-length albums, with a new one (Transmigration of Consciousness) scheduled for release by Witching Hour on March 21.

Two things about this band caught my attention: First, I thought the album art (featured at the top of this post) was way cool. It’s by the talented Michał “Xaay” Loranc, who has also produced album art for the likes of Nile, Behemoth, Necrophagist, and Vader — as well as the kick-ass cover to Evocation‘s latest release (which we featured here) and the original cover to The Return to Darkness by India’s Demonic Resurrection (featured here). Second, I noticed that the band includes Behemoth guitarist Patryk Dominik “Seth” Sztyber, and Behemoth is one of my favorite death metal bands.

And to top it off, Witching Hour was streaming a track from the new album called “Identity With Personification”. So, I listened — and holy fuck, did that song grab me by the throat right from the intro. It’s built around an absolutely killer verse riff (accompanied by ice-cold vocals and a rock-style drum pattern) and some pretty goddamn killer riffs in the chorus, too (where the vocals switch to Nergal-esque roaring) — not to mention a sweet guitar solo near the end.

Maybe because I’ve got Polish metal on my mind now, but the song reminded me, in a very good way, of Behemoth’s “Chant for Ezkaton 2000 E.V.”, though with an even deeper groove cutting through it. In fact, this song just went on our list of “most infectious song” candidates for 2011. Check it out:

The CD eventually will be available for order at the Witching Hour web store (here). Don’t yet know if there are plans for global digital distribution, but if I find out, I’ll update this post. More info about the band is available at this location.

In the realm of extreme metal, Massachusetts may be best known for its hardcore and metalcore acts, but Sentinel is going to help change that impression. They’re the most exciting, most skull-fuckingly good new Bay State metal band outside those genres that I’ve heard since Revocation exploded on the scene. Listening to the two tracks they’ve released so far in their nascent existence made me feel like someone funneled 100 gallons of jet fuel into my head and then tossed in a canister of napalm to trigger ignition.

Try to wrap your mind around an amalgamation of Brutal Truth, Alien-era Strapping Young Lad, and Rareform-vintage After the Burial. I could have selected different references, but those are the ones that came to mind first. They roughly capture the no-holds-barred speed, the technical complexity, the ass-on-fire vocal delivery, the djent-style bass execution, and the successful combination of deep groove and head-exploding mayhem that these songs manage to fuse together into an imminently satisfying whole.

I should also mention, there’s a guitar solo on “Among the Flies” that would make Revocation’s Dave Davidson proud. And in my lexicon, that’s high praise.

Sentinel apparently came together in the winter of 2006 on Cape Cod. That’s got to be a first for a metal band. If anyone knows of another that had its genesis on Cape Cod, please let me know. Line-up changes followed, and now the band has seen fit to unleash those two tracks I mentioned, which they were kind enough to send me, and which I’m mightily enjoying despite the fact that I’m fairly sure every time I listen to them, I destroy brain cells that will never re-grow. 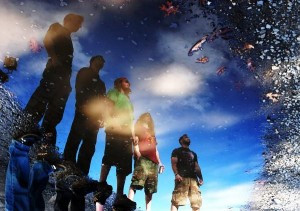 The band recorded these songs with Cannae’s Shane Frisby at The Brick Hithouse Studios, and had them mixed/mastered at Damage Studios (Revocation, Unearth, etc.) by Pete Rutcho, which helps explain why they sound so excellent.

Sentinel report that they’re currently finishing pre-production on a slew of new material, and are headed back into the studio in a few months to record another (5-song) E.P. That release will feature cover artwork by Wes Benscoter (Slayer, Dio, Sabbath, Hypocrisy, Cattle Decapitation, Mortician, etc.), courtesy of a contest selection by Revolver magazine’s editor-in-chief. I can’t wait to see what other tricks these dudes have up their sleeves.  Listen, please:

For more info about Sentinel, check their Facebook page or their MySpace. You can get the two songs on iTunes or Amazon MP3. 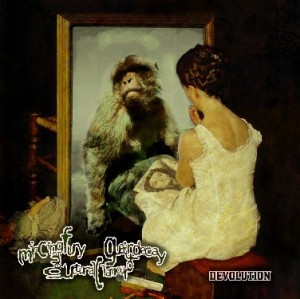 I got a press release about this band that included an opportunity to download their latest album, Devolution, which was released by a U.S. label called United Guttural in October 2010. The small politically correct part of my self took a step back when I saw the band’s name, but then the much larger part that’s constantly on the prowl for outrageous, demented metal shoved me forward. Plus, I thought the album cover was kinda cool.

So, what the fuck, I downloaded the motherfucker and listened to the first song — and under the rules of MISCELLANY, that meant I had to include it in this post. Before I knew it, I was five songs into the album — not that it took long for that to happen, because the songs are short (14 tracks on the album altogether, clocking in at about 35 minutes total).

These dudes nearly faked me out with the chamber music in the first track, but that bit of fakery didn’t last long. What followed in the next four songs was electrode-to-the-nuts/ovaries grindcore mixed together with brutal death and Devourment-style slam. But that wasn’t all. There were rap samples added to “Rumiste DC”, some freaky electronic effects at the beginning of “Guys who are failing in the end”, a bizarre amalgam of vocals and scratches in “Devolution”, not to mention a near-total disregard of consistent time signatures, more time-signature violence and a Czech conversation in the outro to “Machinka” that I think I’m better off not understanding.

I’m almost afraid to hear the rest of this album’s songs — but at the same time I can’t resist wanting to listen. Yes, it’s totally off-the-hook music, but that larger, mindlessly brutish part of myself was right: it’s outrageous, demented, and compulsively listenable metal. It sounds like a big goof, but at the same time it’s a great example of what’s exuberantly free in metal. Check this out:

Devolution was released in October 2010, and apart from five new tracks, it includes re-recordings of selected songs from each of the band’s previous releases, plus a “bonus” cover song. You can get the album from United Guttural here, or by e-mailing the band at antitrend@seznam.cz.

Am I completely off my nut, or is all this shit as good as I think it is?  Comments please!