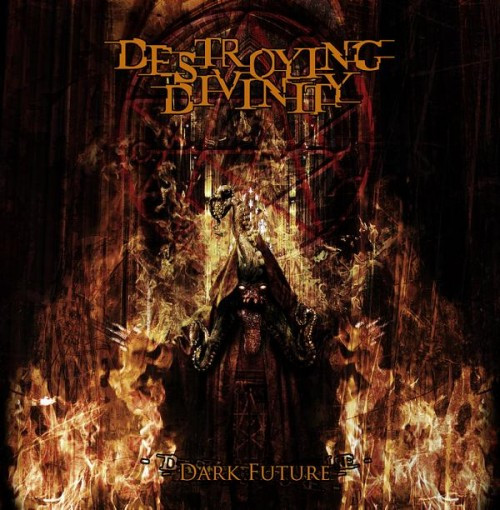 For new readers (and yes, we do seem to be picking up new readers steadily, astonishing as that may seem), here’s how these MISCELLANY posts work: We maintain an evolving list of music from bands we’ve not heard before that look interesting. At irregular times, I pick a few names off the list and check out a song or two from each band, not knowing in advance what they’ll sound like, and then record the experiences in an installment of this series. Finally, I add the songs themselves so you can decide for yourself if it’s your kind of thing.

Lots of the music on our MISCELLANY list are band submissions to our humble site. If I had more time, I would like to write full reviews of all of them (or at least all the ones I think would be worth your time), but sadly, it’s just not possible. This series remains the best way I have to spread the word about music that may be as new to you as it is to me.

The caveat is that I don’t know in advance if the music will be good — though in the case of band submissions, I figure the process of self-selection improves the odds that I’ll like it: Any bands who know anything about this site aren’t likely to send their music our way unless they think it will suit our taste in extremity. Unless they’re too high to think straight, which is always a possibility.

Today, all the music is from band submissions. Unlike most of these MISCELLANY forays, I didn’t listen to all of them in one sitting, but instead, spread it out over a few days. But I did listen to them in this random order: Destroying Divinity (The Czech Republic), Dire Omen (Canada), and Wake (Canada). After the jump, my impressions about the music . . . and the music itself. 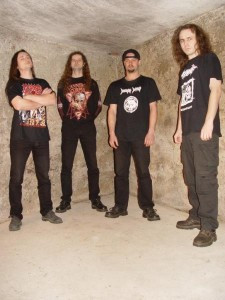 This Czech band sent us a download of their third album, Dark Future, which was released on the Brutal Bands label in September of last year. Despite the fact that the band have been in existence for almost a decade, with three albums in their output, I hadn’t previously heard any of their music. The fact that their third release was on Brutal Bands gave me a clue about what I was in for.

So, I sat down in the specially constructed NCS brutal-listening chair — the one that’s bolted to the floor and features a seat-belt and shoulder straps — put the big piece of rawhide between my teeth so I wouldn’t inadvertently bite off my tongue, and listened to a song called “To Live In Gloom of the Beyond”. Holy fuck! It turned out to be just my kind of thing. So, I couldn’t resist listening to the song that followed it, “At War With Two Worlds” — and I bit right through the rawhide.

Destroying Divinity: To Live In Gloom of the Beyond

For more info about Destroying Divinity, and more music to stream, here are links to their pages: Facebook, MySpace, Bandzone. The CD is available from Amazon, and as a digital download from Amazon MP3 and iTunes. 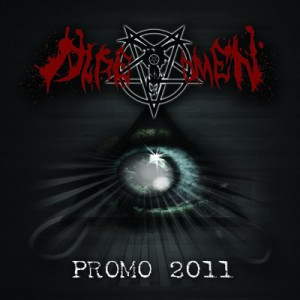 Dire Omen make their base in Edmonton, Alberta, Canada. They’ve only been in existence since 2009. They recorded a demo in 2010, and then in January of this year they finished a second promo, which is what came our way over the ether.

It turned out that the new promo only includes three songs, so I thought I’d bend the MISCELLANY rules a bit and listen to all three.

What a coincidence! More old-school death metal – but this time with pronounced black-metal trappings. Though not as accomplished as Destroying Divinity, I thought the promo showed a band with real promise.

The songs on Dire Omen’s promo slash and burn with vehemence, but also include mosh-inducing Suffocation-style breakdowns, melodic tremolo-infused guitar leads, and slow, morbid passages that herald the apocalypse. The production shoves the bass and the pummeling drums forward in the mix, to good effect.

I was a little disappointed in the vocals on these tracks; at times, they sounded labored or strained. But of course, that’s easy for me to say since if I attempted this kind of singing I’d have to be hospitalized.

Here’s the second track on the promo. See what you think:

With the band’s permission, we’re giving you THIS LINK that will allow you to download their three-song promo at no charge. And for more info, here are their page links: Facebook, MySpace, ReverbNation. 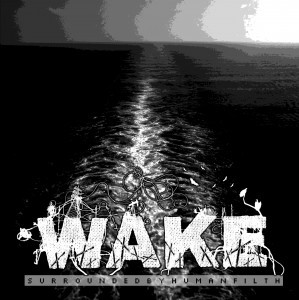 I promise, this was just a random coincidence, but Wake is not only from Canada, they’re also from Calgary, which is just about 3 hours down the highway from the home of Dire Omen. Like Dire Omen, they’ve been in existence only since 2009. They released a five-song EP last year called Surrounded By Human Filth, which is the album the band kindly sent our way.

The first track, “Emerge” turned out to be an extended intro, predominately a slow, guitar driven piece of ominous melody with a spoken-word narrative vocal suggesting that perhaps mankind is as much attracted to suffering as to the normal and the positive things in existence. Of course, I had to see what came next.

And what came next was “Defiler”. It defiled me — a blast of blistering, fuzzed-out grind with typically tortured vocals, but with interesting rhythmic variety.

So, fuck it, I decided to listen to the rest of the EP — and found even more to like. Unlike some flavors of grind-influenced music, Wake’s songs have structure and melody, rhythmic dynamics, and one inspired guitar lead after another. My favorite track is called “Cannibal Design”. After a surging, grinding opening section flavored with tremolo guitar, it drops into a down-tempo finish that features a haunting, memorable melody along with some imminently head-bangable riffs. Check it out:

Only after listening to the music — which I found damned impressive — did I begin to do a bit more research about this band, and discovered that several grind-focused blogs put the album on their lists of “Best of 2010” releases. I also found out that they’ve now started recording their first full-length, which will be mixed and mastered by none other than Scott Hull (Pig Destroyer). That’s some motherfucking fine company to be keeping. Color me very interested in what will come of this collaboration.

Last bit of Wake news: Just a few days ago, the band announced a new lead singer — Shane Hawco (Thorazine, Exit Strategy) — who apparently will be shrieking and screaming on the new album.

If you like vinyl, Surrounded By Human Filth is available for order as a 7-inch from the Relapse web store (here). The music will make its appearance on iTunes soon. To follow the doings of Wake and listen to more music, here are their page links: Official Site, Facebook, MySpace.

Now, here’s a widget with two more songs from the EP. Enjoy.

That concludes this session of MISCELLANY. I had very good luck with these picks. I hope you liked the music, too. And whether you did or didn’t, please enjoy the rest of your fucking day.