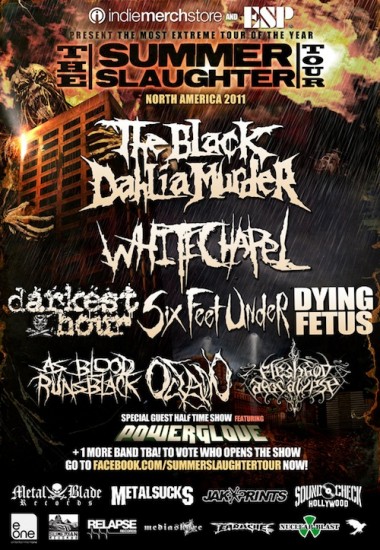 Tonight, the official line-up of this year’s SUMMER SLAUGHTER TOUR was announced. Well, there’s actually one slot yet to be filled. More about that in a minute. But first, here’s the line-up except for that one slot:

Powerglove is also listed for a “special half time show”, whatever that means. I am going. Definitely. I don’t love all these bands equally, but I would pay money to see every one of them — but most especially Darkest Hour, Dying Fetus, and . . . Fleshgod Apocalypse! Kinda blows my mind that the almighty FA is down at the bottom of the bill, so small you can barely see them. Fuck that shit! Anyway, I don’t yet know the dates and places for the tour. That info won’t be released until April 20. Motherfuckers better be comin’ to Seattle, that’s all I have to say.

Back to that one unfilled slot. The tour organizers have left that slot open on purpose. They’ve put together a list of 10 bands and they’re asking fans to vote on which one should fill the last slot as the opening act. The list of candidates and how to vote are after the jump. 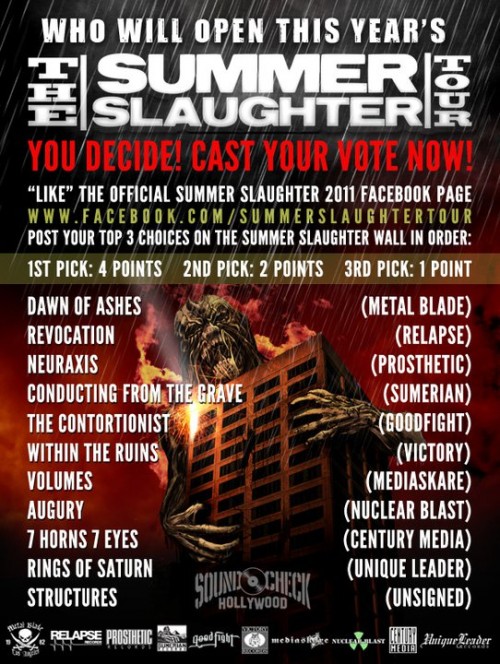 That is a tough fuckin’ choice. One thing that’s very cool, at least for me, is that Seattle’s 7 Horns 7 Eyes is on that list — and on top of that, they just announced their signing with Century Media today. A sweet day for the home boys.

Soon as we get the tour dates and venues, we’ll let you know.