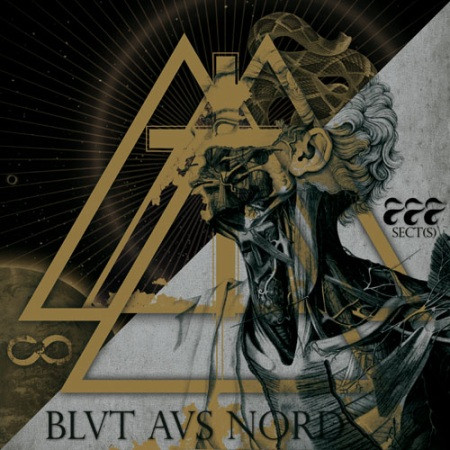 I’m really proud of the title to this post. I thought it up all by myself, without any help from my cat on this one. Did you see what I did? I took the word “banned” and capitalized the first three letters, because they stand for Blut Aus Nord. Really clever, huh?

Yeah, you’re right. It’s as lame as a three-legged dog. I need to get the cat back into the post-title work. I guess I’ll have to start feeding the little fucker again.

Anyway, back to Blut Aus Nord. In my continuing effort to get better educated about black metal, BAN is a band whose music I’ve only recently started exploring, and I’m finding it really interesting. They have a new album — 777 – Sect(s) — scheduled for release on April 19 (one day earlier internationally) via Debemur Morti Productions. And for a limited time only, the whole album is available for streaming.

And when I say “limited time only”, I mean it’s really limited — as in today and tomorrow. After that, the music turns into a pumpkin, leaving only a glass slipper on the steps.

Okay, that Cinderella metaphor was as weak as my fucken post title. Just go listen to the album. I’m doing that right now, and diggin’ it. The tracks are embedded in a player after the jump, though I presume the links will go up in smoke come Monday.