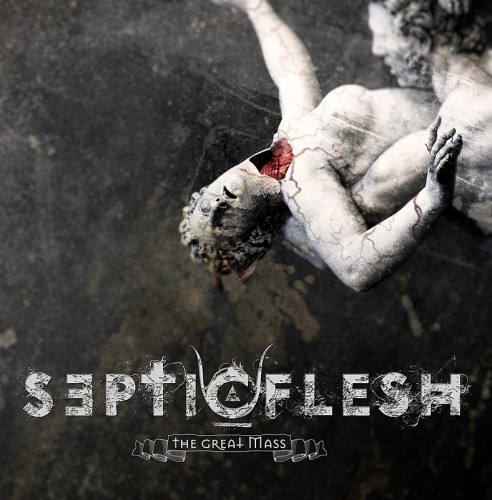 (Our UK contributor Andy Synn provides his review of an album we’ve been eagerly awaiting here at NCS — the new one from Greece’s Septic Flesh, due for release by Season of Mist on April 18 in Europe and one day later in NorthAm.)

Ladies and gentlemen, for my next trick I’m going to attempt to review the new Septic Flesh album without ever explicitly mentioning their previous album Communion (not counting this mention obviously)!

Equally comfortable playing the roles of death metal behemoths, gothic troubadours and classical composers, Septic Flesh have crafted another deep and rewarding piece of majestic, symphonic metal that carefully navigates the pitfalls and clichés which plague many of their peers. Largely this is due to their focus on making the more esoteric elements of their sound just as important and vital to their success as the guitar riffs and drum patterns which underpin them.

I for one could not imagine these songs without the complex classical arrangements, nor see them existing without the frantic energy provided by the furious drums and guitars. At no point is the orchestration treated as an afterthought, or designed simply to fill otherwise empty space, and equally it has been used at the expense of the metallic heart which powers the songs. Rather, the classical elements have been composed to suit the core metallic might of the band . . . which has itself been influenced and shaped by the core classical influences that run through their musical veins!  (more after the jump . . .) 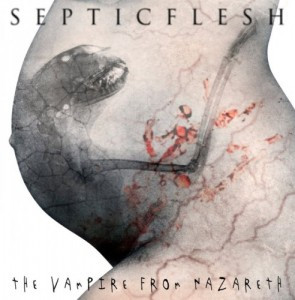 “The Vampire Of Nazareth” opens with an eerie female vocal part, while the orchestra builds up a dizzying array of notes and sharp stabs, twisted Hellenic melodies setting the scene for some gigantic slabs of death metal riffage and oppressive symphonic work. The closing passages echo with the flickering ghosts of Paradise Lost and My Dying Bride, reverberating leads and chanted vocals adding a slow-burning darkness to the proceedings, replete with echoing choral refrains and steady, relentless drumming.

“A Great Mass Of Death” dynamically shifts between slow, monolithic chord progressions and more aggressive, up-tempo riffs, accented by the shrewd drumming of Fotis Giannakopoulos whose sophisticated playing allows the song to breathe naturally. Ebbing and flowing like the rising and setting of the sun, refined male and female cleans vie with grandiose visions conjured by soaring strings before fading into minimalist bass and drum segments which allow the clean vocals to carry the song and display their own distinctive brand of mesmerising power. Past the half-way mark the song transforms from a moody piece of gothic death metal melodrama into an all out firestorm of blazing riffs and merciless drumming.

From its outset, “Pyramid God” is catchy as hell, moody goth-metal riffing once again recalling prime Paradise Lost, albeit accented by a much more aggressive, anvil-heavy edge and raging guttural death vocals. The song shifts gear part way through, introducing a tribal beat over which the orchestra weaves a series of baroque strings and war-like brass arrangements, before the band crushes all the listener with full-on death metal assault of steamrollering drums and skull-fracturing riffs, all based around a primal stop-start dynamic.

“Five-Pointed Star” begins with a tease of stomping riffage and etheral female chanting before igniting in fiery wrath. The shifting speeds and tempos of the drums give the song an unpredictable edge, while exquisite lead guitar work adds a wealth of character to the song’s oppressively bleak mood. The orchestration is phenomenal, huge swathes of militaristic brass and horns painting a blackened picture while subtle, sweeping strings add melodic lead counterpoints to the punchy riffs and raging vocals, pushing the speed into the red only to fade away to a theme of marching horns and percussion. 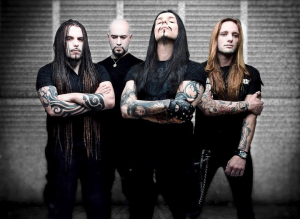 “Oceans Of Grey” is ominously restrained, both during its slow start and its faster, more black-metal moments. The constructions of both the orchestration and the guitar work really shine in tandem on this song, demonstrating how the two elements are composed in largely the same manner for mutual benefit. The martial beats and rhythmic guitars create a sense of growing threat and urgency, and the enigmatic and artful use of choral voices, piercing brass and suggestive wind instruments eventually climax in an epic cavalcade of emotion and artistry.

So far, this album has eerily recalled elements of the band’s pre-hiatus work, reminding me most strongly of A Fallen Temple, albeit viewed through a prism of enhanced extremity and more grandiose ambition. This may not even be conscious on the band’s part, but it pleases me to sense and tease out these subtle threads which link the band’s current incarnation to its more gothically inclined early years, without ever being derivative or invasive.

In “The Undead Keep Dreaming”, we find both the most melodic and most extreme moments of the album juxtaposed against one another. The clean vocals of Sotiris Vayenas vying with the terrifying layered growls of Spiros Antoniou for supremacy, with the musical elements shifting from blazing speed to crawling slowness in an instant. At times the song recalls the more esoteric moments of Morbid Angel’s own occult obsession, all crushing riffs and skillfully deployed moments of extremity, yet other parts are focussed on quiet, sinister moments of minimalist guitar, bleak string patterns and a hypnotic vocal refrain totally at odds with the raging extremity of the rest of the song.

“Rising” has a grim beauty, the vocals and mesmerising guitars giving life to the dark romanticism that underlies much of Septic Flesh’s musical and lyrical approach. More overtly riff-heavy, the orchestral elements are largely absent in favour of a surplus of huge guitar melodies and intricate drumming. The emotive roar of Spiros Antoniou, backed by the mellifluous clean vocals of Sotiris Vayenas, continues to display its power and integrity, both men delivering a deeply emotive and compelling performance. The song does however end a little abruptly and feels oddly under-developed when compared with the ambitious arrangements that surround it. 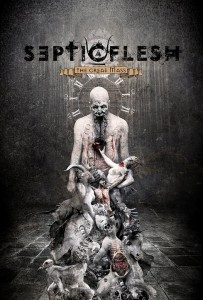 For all its blasting ferocity, “Apocalypse” also breathes a sense of transcendent darkness, crossing weeping strings and melancholic guitar lines with bestial roars and ferocious drumming. While reeling from a particularly damaging aural assault, the subtle moods and sensations of the orchestra sweep in to soothe your wounds, only for the damaging sonic excess of ringing guitars and implacable drumming to punish you once again without warning. Unafraid to both revel and rein in the extremity when necessary, the band continues to twist their classical and metallic influences into new and interesting shapes.

The strange skittering introduction of “Mad Architect” bleeds into an uncomfortable arrangement of deranged strings and stabbing off-kilter riffs, only the powerful and insistent drums keeping everything held together tightly. Even the multi-layered death vocals seem more maddened in their delivery. The earthy, grinding metallic elements force the song to coalesce into a more sane form for a time, before the manic strings shatter this enforced control in order to capture the essence of madness and paranoia. Yet as interesting and complex as the song’s arrangement is, it still seems to lack a definitive goal and a major sense of climax.

Final track “Therianthropy” has a more arguably direct feel than the rest of the material, utilising Sotiris’ clean vocals in a more upfront manner and to greater effect, as well as some more artificial synths to add further variety to the symphonic/orchestral side of the music. The riffs make use of equal parts melody and dissonance while both vocalists trade off lyrical refrains with vigour. More emphasis is placed on the guitar work and the song is structured in a more standard manner, yet does not get boring or predictable, due partly to the infectious nature of the bleak melodies employed and partly to the clever and memorable drum-work displayed throughout.

The greatest change here has been in the manner of incorporation of the more varied elements of the band’s expansive musical palette. Whereas previous orchestration seemed more based in Germanic or more generalised compositional forms, designed to enhance/supplement melodies already introduced by the guitars, this time around the non-metal elements bring a distinctly Greek flavour to proceedings, the melodies and often maddeningly complex orchestrations accenting the cultural character and distinctive darkness of the band in a similar way to Aealo (Rotting Christ) and Abrahadabra (Dimmu Borgir), both albums that (arguably) saw the bands attempting to expand the remit of the classical/cultural elements of their sound.

A truly grandiose, symphonic experience, the new Septic Flesh album is as classical as it is metal and strives to be a greater, more moving and more transcendent experience than ever before. Despite some slight weaknesses towards the end of the album, your opinion of the record as a piece of art will still primarily be dictated by whether or not orchestration in metal prompts a knee-jerk negative reaction, or whether your mind is open to the idea of a band exploring the classical influences and phrasings which inform the darkness at the heart of, and form the roots of, much of the genre.