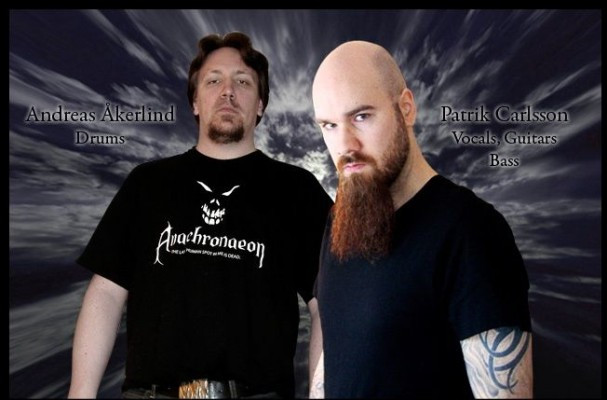 Anachronaeon is a two-man band from Sweden consisting of Andreas Åkerlind on drums and Patrik Carlsson providing guitars, bass, vocals, and keys. We first heard their music last summer on a tip from our blog-bro Niek at Death Metal Baboon (yes, it seems we’re destined to mention DMB in every post we run this week), and we then featured the band in one of our MISCELLANY posts last August (here).

Yesterday we got an e-mail from Patrik Carlsson telling us that Anachronaeon have recorded a cover of “Wasting Love” by Iron Maiden, which the band are making available for free download. I took a deep breath when I saw that, (a) because I love the original Maiden version of “Wasting Love” (despite the clean singing), and (b) because I couldn’t imagine what Anachronaeon would do to the song, given the band’s own musical style — which is a dark fusion of melodic black- and death-metal.

And right after that deep breath came a rush of thoughts about song covers in general — how rarely they succeed, and how “success” should be defined and measured. After the jump, those thoughts (on which we’d like to see your comments) plus Iron Maiden’s official video for “Wasting Love” and Anachronaeon’s cover. 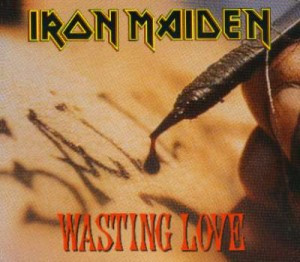 Song covers that just faithfully reproduce an original song don’t add anything. Why would anyone listen to a reproduction when you can listen to the original? That point seems inarguable. So, if a cover needs to be different from the original to be worth hearing, what makes a cover succeed and what makes it fail?

I think the answer depends to some extent on the popularity of the original song and how you, as a listener, feel about it. If it’s a great song, a well-remembered song, the kind of song that welcomingly unfolds in your head as soon as you hear the first few notes, then a band that alters that song in a cover is playing with fire. I think for a cover of that kind of song to work, the cover band almost has to change it dramatically. Making minor alterations around the edges can be jarring — you mind is playing one thing in your head from memory, and here and there the cover recording is doing something else that you’re unlikely to hear as an improvement on the original.

On the other hand, changing a beloved original song in dramatic ways can be equally off-putting — or it can be a wonderful surprise. It all depends on whether the cover song can stand on its own as something interestingly different, on whether the cover band has found something in the original that it can run with, maintaining a connection to the original but spinning out a variation that can stand on its own two legs as a good piece of music. There’s no formula for how to do this.

Two covers I’ve heard recently (and written about) jump to mind as examples of what works. One is Amon Amarth‘s cover of System of A Down‘s “Aerials”, which appeared as a bonus track on Surtur Rising (if you want to hear that song, use this link). Another is Torture Division‘s cover of a Mastodon song called “Iron Tusk” (which can be heard here). Both songs imprint the cover band’s own particular style on the original, creating something different and good, without completely losing connection with the originals.

Now we come to “Wasting Love”. It happens to be one of my favorite Maiden songs. It’s a ballad that features impassioned, vibrant clean vocals from Bruce Dickinson, a deeply memorably melody, great rhythm and lead guitar lines, and a smokin’ solo by Janick Gers, who wrote the song with Dickinson. Here’s the official video for “Wasting Love”:

This is the kind of song I mentioned above where a band attempting to cover it will be playing with fire. What has Anacrhonaeon done with the song? 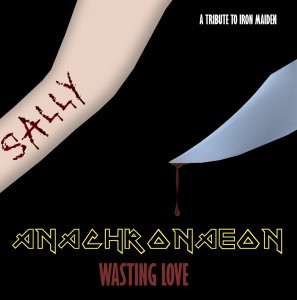 Well, the cover is definitely not a reproduction and it’s definitely not tinkering around the edges, so those pitfalls have been avoided. Anachronaeon has made some significant changes, but it’s still recognizable as “Wasting Love”. The original ballad has a darkness at its core, and Anachronaeon have seized on that and amplified it, dropping the tempo of the intro passage, substituting tremolo guitar and blast-beats for the guitar arpeggios, down-tuning the guitars, and for the most part roaring the lyrics in a bestial guttural in place of Dickinson’s soaring power-metal cleans. Anachronaeon also ends the song with a relatively quiet, melancholy outro instead of Maiden’s ramped-up finish, and that’s a fitting way to end Anachronaeon’s version.

Again, the original isn’t something that can be improved upon, it can only be changed into something different that also holds up well on its own merits, and I think this tribute accomplishes that.

The one aspect of the cover that’s hanging me up a bit are the brief clean vocals. Dickinson’s memorable vocals are the key to “Wasted Love”. This is one of those examples I mentioned earlier where the mind is streaming Dickinson’s vocals and Anachronaeon is playing something quite different. Patrik Carlsson certainly doesn’t try to imitate Dickinson’s vocals; they’re subdued instead of bombastic. But I think the cover might have worked better without any clean vocals at all — just the harsh gutturals. Maybe you’ll have a different reaction. Check it out:

To download the Anachronaeon single, which includes both .mp3 and .wav versions of the song, release notes, and cover art, right-click on the link below (we decided to host this file on our own server rather than subject you to the pop-up ads you’d get using the same Mediafire link that Patrik sent us).

For more info about Anachronaeon, visit their official site at this location.

What do you think of cover songs? Are they worth it? If they are, what makes a cover song successful? Are there some good metal covers that popped into your head as you read this post? Leave us some comments!

12 Responses to “THE PROS AND CONS OF COVERS”