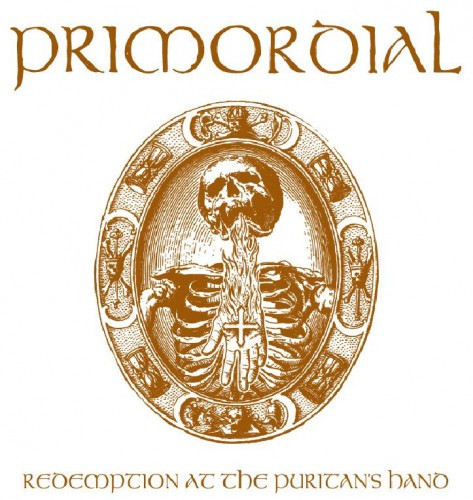 Primordial’s 2011 powerhouse album Redemption at the Puritan’s Hand is the black metal record I would give to my friends who listen to Fleet Foxes, and not merely because this is ‘folk metal.’ Rather, as they have before, Primordial transcends folk metal.

That term is insufficient. It has come to describe bands that shoehorn ethnic instruments and elements into what is, in the end, basically power metal repackaged. I find the practice self-deprecating and highly commercial, resulting in music with more in common with a Nightwish record than any strong sense of cultural identity. That is not Primordial. This record has nothing in common with the work of, say, Eluvite, Tyr, or Turisas, who make themselves into a travelling circus side show.

Primordial have no need of specialized instruments—no Viper violins, just guitar, bass, drums, and voice. The elements that feel meaningful and authentic are transmitted well enough in the tribalism of the drums and the melodies of the guitar. The unique sounds of Celtic folk have been alloyed completely with black metal guitars; there is no separation.  (more after the jump . . .) 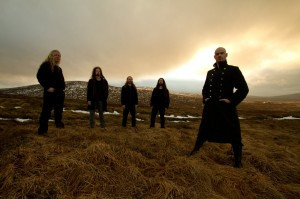 The standout performance is by vocalist Alan Averil Nemtheanga, who operates somewhere between ‘proper’ melodic singing and the more typical metallic rasp. At times—take this with a grain of salt—he’s reminiscent of Bob Dylan in the way he strangles beauty out of ‘ugly’ sound.

Just as the title suggests, Redemption at the Puritan’s Hand deals with the eradication of native culture by Christianity. It’s not a new subject (see Burzum, Agalloch, most Viking metal bands), but one that has rarely been explored in the context of Ireland. Primordial make the anguish they share with Ireland’s troubled past the focus of the album.

In many ways I’d consider Redemption to work as a companion piece to Nile’s Those Whom the Gods Detest—both are albums about the triumph of monotheism over paganism that toe the line of the band’s previous (rightfully critically acclaimed) work, but with updated production and a renewed focus on atmosphere.

Redemption may not have songs quite as strong as its predecessor To the Nameless Dead (one of my favorite albums of 2007), but is darker and more raw. Both are absolutely essential listening for anyone interested in metal music that packs an artistic and emotional punch.

This is the black metal record I’ve enjoyed listening to the most in 2011.

EDITOR’S NOTE: Here’s a track from the album that’s been streaming at the Metal Blade site (and you can go there to order the album, or directly from Primordial at this location):

12 Responses to “PRIMORDIAL’S “REDEMPTION AT THE PURITAN’S HAND”: A CRITIQUE”