All sorts of things are metal, even though they don’t involve music. That’s what this series is about. Things can be metal for many different reasons. In general, people, places, things, and occurrences are metal because they’re awe-inspiring. But not everything that’s awe-inspiring is metal. Natural wonders, architectural marvels, and great works of art can be awe-inspiring in their beauty, but you wouldn’t call all of them “metal”, or at least I wouldn’t. An element of brutality will help something qualify for the term, as will an element of “otherness” — something that’s unconventional, something that’s rare and maybe even weird and unexpected, or something that appeals to the anarchic impulse in most metalheads. 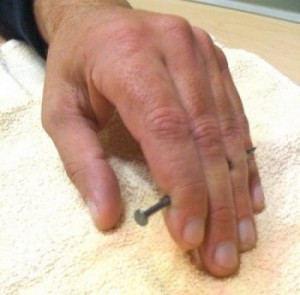 Having said that, I also find myself applying the term “metal” to things that are just off-the-hook ridiculous or bizarre. Maybe that’s just me. To be clear, I don’t think everything that’s ridiculous is metal. Donald Trump is ridiculous, and bizarre. So is Dancing With the Stars. But they are definitely not metal.

I think it helps if ridiculous behavior is self-destructive. Like what happened to the dude’s hand pictured over to the right, which we featured in a previous installment of this series. I thought this was pretty fucking metal. I thought the same thing about the dog who chewed off his master’s gangrenous toe while the guy was passed out in an alcoholic stupor (here).

Anyway, most of today’s offerings fall into the “ridiculous” category of non-musical metal. I’ll just leave it at that. See for yourself after the jump.

A friend and fellow Texas ex-patriate sent me these photos, purportedly of a dude who bought a Brahma bull in Kansas and drove it to the Tulsa, Oklahoma area. When I saw the first photo, I thought for sure it had been photo-shopped, but after seeing all the pics, I decided they were real.

I know times are tough with our still-pretty-fucked-up economy, but man, there’s gotta be a better way to save a buck on livestock transport, even for a down-on-his-luck cow-puncher. On the other hand, as my friend said, “he didn’t have a wreck, nobody got hurt, and the torn upholstery and bullshit didn’t devalue the car any.” Based on that, my friend decided that the letters spray-bainted on the bull’s side must have stood for “No Harm Done”. As he said, that isn’t a bad life motto, now is it?

So, this is ridiculous, but I also think it’s pretty fucking metal, even though it’s not exactly self-destructive. I haven’t quite figured out why I think it’s metal. I’m still thinking about that . . . 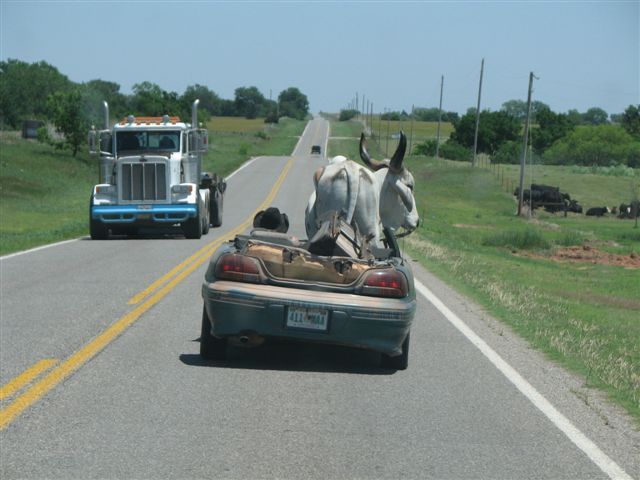 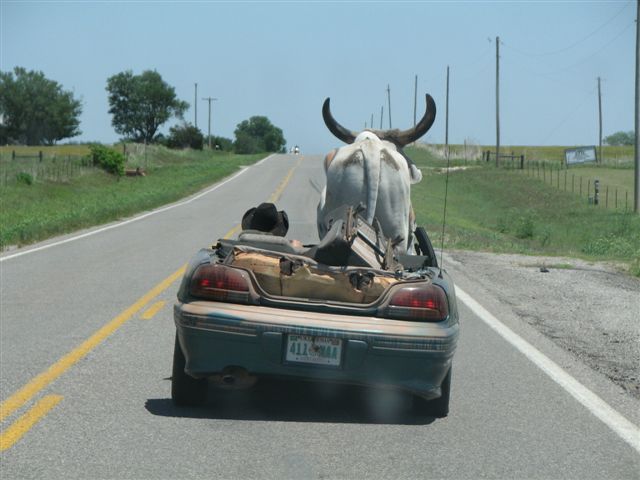 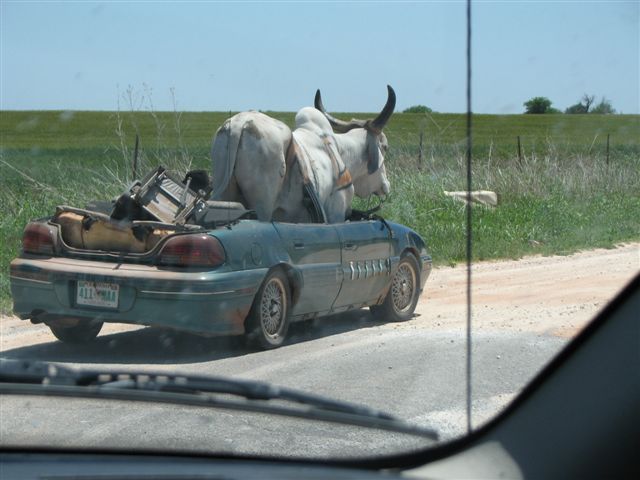 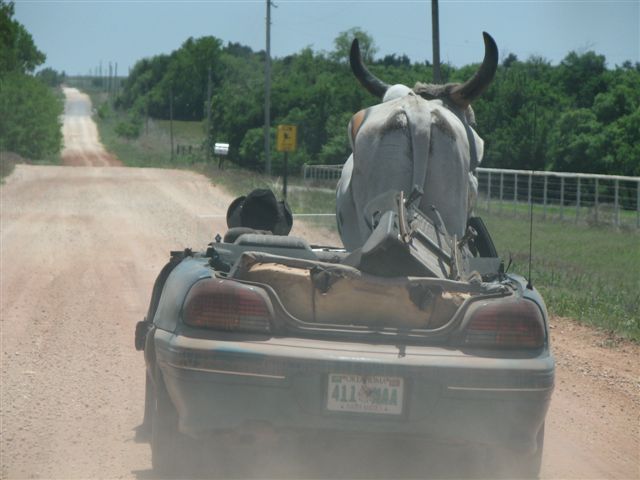 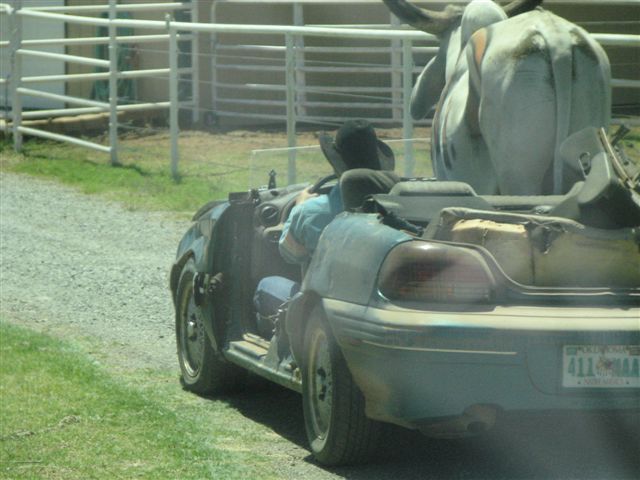 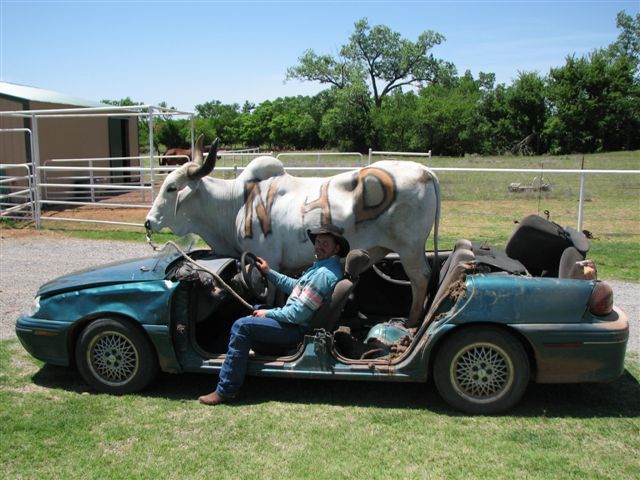 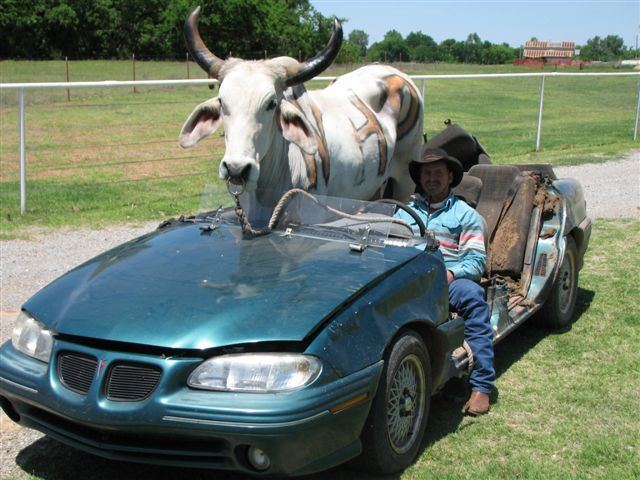 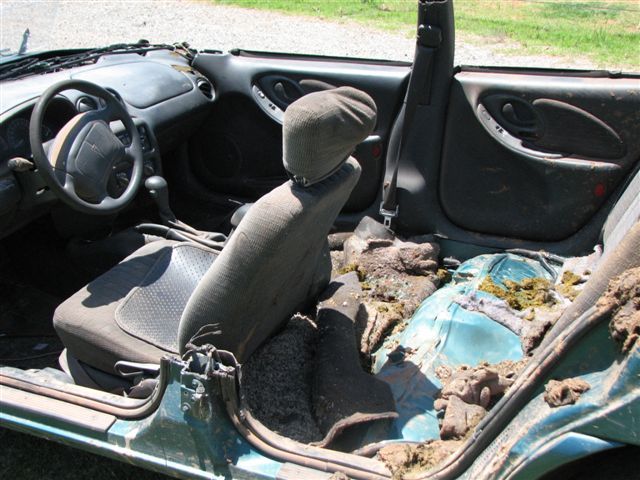 In an earlier life, growing up in Texas, I used to work around Brahma bulls at a ranch. Most of the time they’re unexpectedly gentle animals, but riding docilely in a convertible? I think that’s pushing the envelope pretty hard. Shit! Speaking of which, I can just imagine rockin’ on down a dusty road, crankin’ some tunes on the radio, and having the vibe interrupted by the inimitable sound of a big wet cow pie hitting your back seat. If this is what this cowboy does to his car, I’d hate to see the inside of his house.

I’ve also been stewing over what else NHD might have meant. Any ideas?

Speaking of vehicular humor, this photo from Wisconsin is my kind of political protest. Just insert a big photo of your local political douchebag right on the tailgate with these words and you’re good to go. 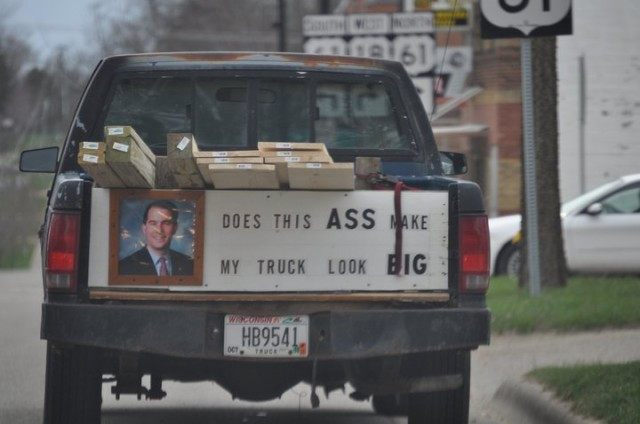 My NCS co-founder IntoTheDarkness told me about this next item. It’s a montage of ads from Egypt for some kind of shit called Panda Cheese. I hope they don’t make the cheese from Panda milk (though if they did, that might be metal, particularly when you think about some poor fucker trying to milk a panda). What makes these ads metal, in my humble opinion, isn’t the fucking Panda cheese, it’s what happens in the ads. See for yourself:

This is an actual promotional video for a company called Barrier1. They sell vehicle barriers and traffic “arrestors”, and they don’t fuck around. You want to stop people from speeding — ever again? Say no more. You want to keep people in vehicles from getting into or out of some secure space? Barrier1’s products will fuck their shit up. I damn sure hope their rubber net product doesn’t become the replacement of choice for speed bumps.

Speaking of the rubber net, whatever they make this thing out of, it’s fucking STRONG.

But, like I said, this video is also a bit ridiculous, from the musical soundtrack to the ad copy about the eye-pleasing cosmetic choices. Definitely metal.

That’s it for today’s installment of THAT’S METAL! Enjoy the rest of your fucking day.