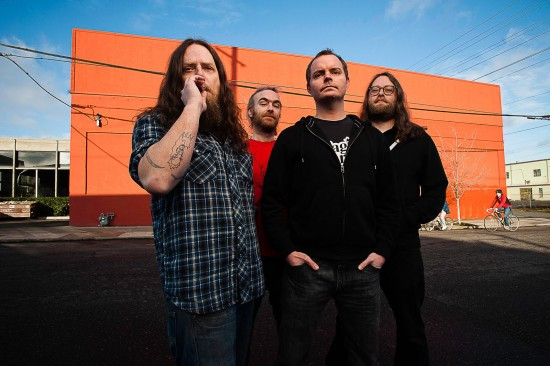 I had plans for today’s posts. Really, I did. And then a few things happened last night that just blew them right outta my head. This happens often, so I’m not beating myself up about it. It’s just part of the price you pay when you have an impulsively enthusiastic personality — planning just becomes a fucking waste of time.

So, one of the things that happened was catching a blurb about Red Fang‘s new video on Blabbermouth. I skim through lots of shit on Blabbermouth without ever pausing, but Red Fang is a name I’d heard enough that I decided this would be a good chance to hear their music, along with moving pictures. I like moving pictures. And oh, I’m SOOOO fuckin’ glad I checked this out! Really and truly.

See, Red Fang is from fuckin’ Portland, which is just spitting distance away from The Emerald City, where our metallic island is located. They came out with an album this year on Relapse called Murder the Mountains. I haven’t heard all of it. In fact, I’ve only heard just the one song in the video. It’s called “Wires”. It’s not as extreme as most of the music we play here at NCS, and it involves, y’know, clean singing. But it’s just a fuckin’ good-time song with some monstrous discordant riffage, some thunderous drumming, and a few massive hooks.

And the video for the song is the shit. It’s like a real-life documentary of what happens when you give a bunch of fun-loving stoner band dudes a $5,000 check (drawn on the “Maidoff Bank”, no less) to make a music video. Now, $5,000 sounds like a lot of money, but you’d be amazed how fast you can spend it when you decide to buy an old station wagon, weld some armor on the front, and start driving through barricades of random shit set up on an aircraft runway.

But it wasn’t the station wagon that put the dent in the video trust fund (that old beater only cost the dudes $685). It was the crash helmets, the stockpile of milk, the mannequins, the pickles, the watermelons, the china cabinets, the Wurlitzer organ, the 15 cases of PBR, the bank of TVs, and lots more. You’ll see. The money goes fast when you get creative about destruction. (the video is after the jump, along with another gut-busting video from RF)

So, I would dearly love to embed this piece of cinematic genius right here on the NCS site, but unfortunately the video isn’t embeddable (yet). For now, it’s only available at The Monster Energy web site. Click this link and go check it out. Then come back here and tell me how much you agree that it’s the best metal video of the year. And then feel free to provide your nominations for second place.

UPDATE:
Now, we can embed the video. How nice:

The video was directed by Whitey McConnaughy in Portland. Now, it turns out that Mr. Whitey McConnaughy also directed Red Fang’s video of the song “Prehistoric Dog” off their self-titled debut album. As much fun as that “Wires” clip was, of course I just had to watch and listen to “Prehistoric Dog”. Possibly, I am the last man in the Western world to see this thing. But just possibly, you haven’t see it yet either. So, what are we waiting for? This thing is fucken hysterical, too.