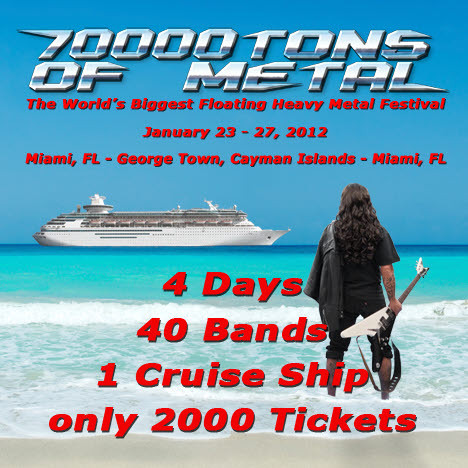 We had lots of fun last year with the 70,000 Tons of Metal cruise, thinking of all the things that could go wrong (for example, this). You can’t blame us, can you? Seriously, the idea of putting about 2,000 metalheads on board a ship with 40 metal bands and 24/7 bars and shoving it off into the Caribbean just seemed like an invitation to disaster.

Our fun-poking stopped, of course, when the cruise happened, no one died, and it appeared that everyone actually had a pretty good time. The tour organizers must have made some money on the thing, because now they’re launching a reprise of the cruise, scheduled to sail from Miami on January 23, 2012. Public ticket sales will start on May 31. Instead of voyaging to a Mexican island, as they did this past January, the new 4-day cruise will be bound for the Cayman Islands, where they have pubs.

Ten bands have already signed on for this next edition of the cruise, including Amorphis, Moonsorrow, and Pestilence. You can see all the names of those adventurous 10 right after the jump.

Did any of you go on the first cruise? Was it worth it? Did people actually die, and it just got covered up?

Here are the 10 bands who’ve signed on to the cruise so far:

11 Responses to “70,000 TONS OF METAL TO SET SAIL AGAIN; JUST BECAUSE THEY DIDN’T SINK THE FIRST TIME DOESN’T MEAN IT WON’T HAPPEN NEXT TIME”