I’m a day or two late reporting the schedule for Amon Amarth‘s European tour, but I forgive myself. What other U.S. metal blog is going to say anything about a European tour at all?

Yes, Amon Amarth will be embarking on a 15-country tour of the UK and the Continent beginning on October 12 in Stuttgart, Germany. Can you guess who will be supporting them on that tour? Go ahead — close your eyes so you don’t see the answer and take a guess.

If you guessed As I Lay Dying, then you’re a fucking genius. I sure wouldn’t have guessed that match-up, even though I like both bands and they’re both in the Metal Blade stable. If you do a word-association exercise, and you say the first band that comes to mind when someone says “AMON AMARTH!”, the odds are you’re not going to say “AS I LAY DYING!”

A band like Entombed would have been closer to what I would have guessed. But as it happens, you can sort of have that cake and eat it, too, because LG Petrov of Entombed provided guest vocals on “Guardians of Asgard” with Amon Amarth when the band played the Metalfest festival in Switzerland on May 29 — and of course it was captured on video. This is fan-filmed footage, so the audio quality isn’t ideal (though it isn’t terrible), but the video quality is pretty good.

Plus, I mean, it’s LG Petrov singing with Amon Amarth on “Guardians of Asgard”. If you’re as big a metal geek as I am (no need for you to confess out loud), you know you have to watch this, just so you’ll be able to die happy if you get flattened by a beer truck while crossing the street today. So, after the jump — Euro tour dates and that video. 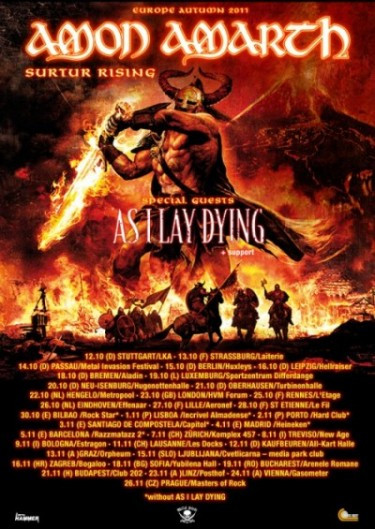