(NCS writer Israel Flanders brings us another of his recent discoveries, this time a thrashtastic band from the UK.)

Go ahead, I dare you. Tell me you didn’t enjoy that.

Time to dig a little bit into my old-school sensibilities. Sometimes modern metal just doesn’t bring what you want to the table, doesn’t fit your mood, whatever. The point is, Hellfighter are solid power-thrash who bring a refreshing sense of old school.  The band is comprised of four members of legendary Brit thrashers Xentrix — guitarist Kristian Harvard, drummer Dennis Gasser, vocalist Simon Gordon, and bassist Mel Gasser — accompanied by the only non-ex-Xentrix member, guitarist Pete Smith.

Let’s get something straight here: Hellfighter kicks ass, and their debut album Damnation’s Wings will kick yours to the curb if you don’t have the metal flowing through your veins to embrace the power that these guys generate. This music has serious balls, serious epic factor, and solid, impenetrably polished song-writing that provide a total package worth checking out. (more after the jump . . .) 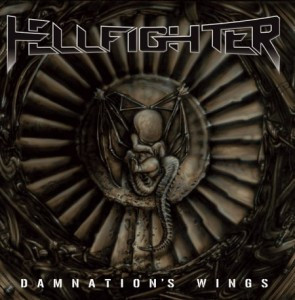 The power-metal aspect of Hellfighter’s sound lies mostly in Simon Gordon’s powerful voice. He sings his lines with utter conviction, hitting soaring notes with a really keen ear for vocal melodies. Beyond that, Hellfighter play a VERY ballsy, very no-bullshit style of thrash with some slight tinges of modern melodic ideas. I would dare say there is a HUGE vibe of Dead Or Dreaming-era Into Eternity on this album (something I dig very much).

This band knows how to throw down the grooves, too, however, as demonstrated by songs like the opening track “Tower Of Sin”, with its traditional heavy-metal feel, or songs like the energetic, fierce “Revolution Within”. The riffs are just tasty in that classic sense — drop-tuned guitars playing beefy, solid, and to-the-point riffage that hits right where it needs to, as hard as it needs to.

The band’s knack for compelling composition is also noteworthy, as evidenced by a song like “A Lesser God”, with its clean intro, the incoming thrash assault that totally shifts gears, and then another changing of gears in the last two minutes to an epic, melodic outro section. This song also includes probably my favorite verse, and chorus, on the album.

Some of the best moments on the album come when Kristian Harvard and Pete Smith break into harmony sections that are just really cool — they know how to play off each other when it’s time for the guitars to branch out.

The production fits this album very well, too. It’s full, beefy, devoid of any weakness, and there’s also a very full bass to the sound, which is always welcome for me. I found the mix to be very even, in that nothing gets lost in the action going on here. In other words, this is a very solid sounding record, not just a solidly written one.

Overall this is an excellent effort. I’d give it a firm 8.5/10. Get this album for yourself, I don’t think you’ll be disappointed.