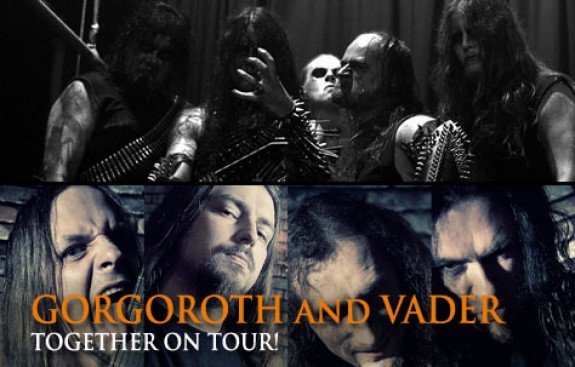 I’ve never been entirely sure about the point of metal news releases about music you can’t yet hear, albums you can’t yet buy, and tours for which you can’t yet acquire tickets, but people still seem to be interested in this kind of shit. Not me, of course. I’m so fucking zen-like in my outlook that these kinds of pointless cock-teasers just flow over me like a soft summer breeze, barely ruffling my hair. My pulse rate doesn’t move a beat from its normal, slothlike resting state. I remain as steady and unmoving as a hummingbird.

Wait, that didn’t end right. Okay, well maybe it did. Truth is, I am metal-nerd enough to get excited about this stuff, though I can’t provide any rational reason why. In keeping with our unintentional Finn-centric theme of this week’s posts, several of these items focus on Finnish metal.

So, here’s the top-level summary of news for this post: Announcement of two new European tours — one featuring Gorgoroth and Vader and the other headlined by Machine Head; a progress report on Insomnium‘s new album; word of an all-star album (and the label “all-star” is no bullshit) in the planning stages from Finland’s Spinefarm Records; and perhaps the most glaring example I’ve seen in months of an interviewer failing to ask a follow-up question (in this case, about Opeth‘s new album).

While I’ve got your attention, I might as well also throw in some music you can actually hear right now — high-quality footage of Suicide Silence performing a song from their forthcoming new album.  (all that stuff after the jump . . .)

I can’t see either of these tours because they will be in Europe and though I’m a jet-setter in my mind, I do not own an actual jet, and the tech-geeks in tech-heavy Seattle still — STILL — haven’t perfected the teleporter technology. But I’m biting down on my frustration and serving up this tid-bit for all you Europeans and true jet-setters out there.

The first announcement is that Norway’s Gorgoroth and Poland’s Vader will join forces for “The Sign Of Hell Tour 2011”. It will include over 45 shows throughout Europe. It will kick off at the end of October and conclude right before Christmas. A press release reports that Gorgoroth’s set will include material from their re-recording of Under the Sign of Hell, to be released on August 29 by Regain Records, and that Vader will be playing new songs from their next Nuclear Blast release, Welcome to the Morbid Reich (due August 13 in Europe and September 13 in NorthAm). Two or three more bands will be added to the bill eventually.

No specific dates or venues have yet been released. If I’m not too bitter about my inability to see this, I might put up a post when the schedule is released. But I make no promises.

The next tour news is enticing and odd at the same time — enticing because the headliner will be Machine Head and the support will include DevilDriver and Darkest Hour, odd because the tour will also include Bring Me the Horizon. At least this time, we have a schedule (though more dates may be added): 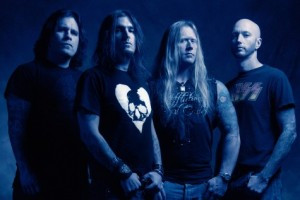 The next album from Finland’s Insomnium is one of the year’s most anticipated at this site. The news is that the band have disclosed the title of the album — One For Sorrow. It’s now scheduled for release in October on Century Media Records. It  was recorded in Gothenburg, Sweden with sound engineer Daniel Antonsson (who’s the bassist in Dark Tranquillity and guitarist in Dimension Zero) and at Fantom studios in Tempere, Finland, where the album is also currently being mixed by Samu Oittisen. Yes, all this did raise my pulse-rate. I don’t know why.

This next item really elevated my pulse, all the way up to the point where it could be detected by trained medical professionals as a sign of life. Finnish record label Spinefarm Records reports that it will celebrate its 20th anniversary by organizing a “summer camp” in July where members of various bands signed to the company will collaborate with each other in creating and recording new songs. Now, check out the bands whose members will be participating:

The resulting album is tentatively titled Spinefarm Allstars. Fuck yeah, I’d say that’s a good name for it. The album will allegedly be released before the end of the year.

Mike Bax of Lithium Magazine recently conducted an interview with guitarist/vocalist Mikael Åkerfeldt of Opeth. Here’s one question and one titillating answer from the interview:

Lithium Magazine: “Heritage” will be your tenth album, and your third album on Roadrunner Records. Did you have anything different in mind that you really wanted to accomplish on this tenth album? 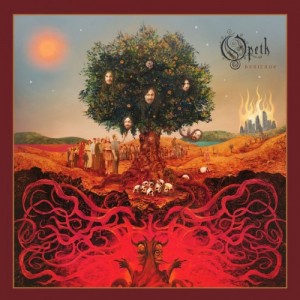 Mikael: I just wanted it to be different. I had a pretty strong urge to do it differently and not be stuck in a rut, so to speak. I’d like to think that every album we’ve done has been an album that reflects what we really wanted to do at the time. This time around, when I started writing, I was a bit disillusioned with what I wanted to do and what we should do as a band. I didn’t want us to get stuck with a sound. I get restless and when that happens it’s just time to move on and try something different, and that’s what we did with this album.

We just wrote eleven or twelve songs that sounded like stuff that I would want to listen to now, rather than writing stuff that sounds like things we’ve already done before. We have always tried to do records that we want to hear. There’s no exception to that rule with “Heritage”, but it’s a different-sounding album than our previous ones.

Here’s what Mr. Bax asked: “If I’m reading my Internet bits correctly, “The Devil’s Orchard” is set to be your first single, correct? Are you going to pop that online to give fans a taste of the new material?”

SUICIDE SILENCE (the only actual music in this post)

Now for some actual music. This is high-quality performance footage of the new song “You Only Live Once”, as performed by Suicide Silence on June 19 in Vienna, Austria. The song will appear on the band’s next album, “The Black Crown”, which will drop on July 12 via Century Media Records.