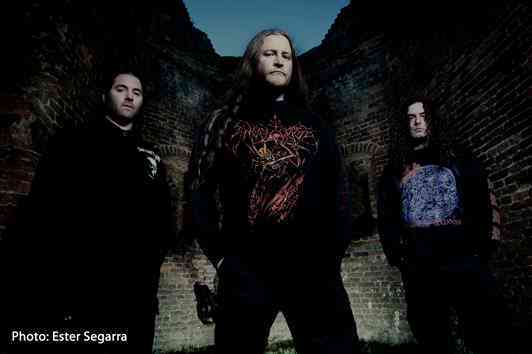 NO CLEAN SINGING is still a young tyke as metal sites go, at least in human years. We’ve only been alive since Nov. 21, 2009. In human years, we’re still pissing and shitting whenever we feel like it, smiling for no good reason, and crying when we’re hungry, which is almost all the time. In metal blog years, I guess we’re closer to a teenager. Most metal blogs seem to age quickly and then die from neglect. But it will take a fucking hydrogen bomb to kill us off, so we’re still here, in the stage of life where we’re learning how to fuck.

Where was I? Oh yeah, how long we’ve been around. Well, in the 19 months we’ve been in action, we’ve written about Detrimentum from the UK no fewer than five times, going back to January 2010. Go ahead, type “Detrimentum” in the search box on this page and see what you get. The first time we wrote about them, we were raving about their 2008 debut album, Embracing This Deformity. And then we found out there had been some line-up changes and that the new Detrimentum consisted of original members Jon Butlin (guitar and bass) and Paul Wilkinson (guitar and vox) plus drummer Steve Powell, who performs with NCS favorite Anaal Nathrakh.

Time passed, as it will. Slowly, surely, the re-cast Detrimentum worked on a new album. The day came, just weeks ago, when it was finished and ready to be unveiled to half-wit reviewers like me — like a nasty, newborn brought out to see the relatives. Except this is a newborn with fangs the size of your fingers who would try to eat all the relatives, or maybe hypnotize them and then eat them, and probably succeed. And good riddance to all of the relatives, because INHUMAN disgRACE is a triumph and Detrimentum should be allowed to eat whatever the fuck they want. (more after the jump . . .) 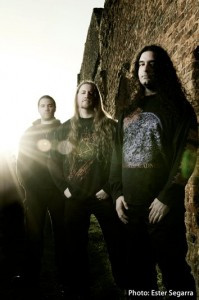 I love bands who are skilled at shooting a molten bolus of lead into my veins and then toss my brain into a cocktail blender with the setting on purée. But, to be honest, I reserve an extra-special admiration for bands who sound brainy as well as viciously pugilistic, and this new Detrimentum album qualifies in spades. This is music that ties your head up and then satisfyingly unravels it.

As compared to their debut album, on INHUMAN DISGrace Detrimentum have increased the technical demands and intricacy of their song-writing, and their performance levels have sky-rocketed. This is the album that many people were hoping would be produced by Pestilence this year. In my book, it elevates Detrimentum into the rarified air of Gorod and Gorguts and a much more melodic doppelganger of Necrophagist. In other words, this is technical death metal with an improvisational air and a real feel for what separates music from mere acrobatics.

The intricate pieces of the music mesh like fine clockwork. The instruments do battle as if in a swordmatch, with subtle shifts in rhythm and tempo, sudden jabs and clashes of steel, swirling glints of light flashing on metal, but always with the sense that these mesmerizing sabres can draw blood.

Wilkinson and Butlin have a field day setting up formidable rhythms and then layering on top of them a treasure-trove of melancholy guitar melodies and tones, including the swarming tone of black-metal tremolo picking. The music is moving, but grim, technical but as powerful as the wave-front of a dark storm. It has the great advantage, compared to much technical death-metal, of weaving resonant melody at the same time as it fires all your synapses with its intricacy.

Wilkinson and Butlin’s guitar mastery aren’t the only aces in this hand. Steve Powell is one of the best drummers in extreme metal, and he shines on this album — inhumanly fast when he needs to be, crazily complicated when he needs to be, and bruising just about all the time. Wilkinson also does a credible job with the harsh-all-the-time vocals.

If you can’t tell, I’m very high on this album — every fucking song of it. Here’s one example (which I’m picking in part because I’m a selfish fuck who doesn’t want to limit what you hear to what the band have chosen to put up for public consumption so far).

[audio:https://www.nocleansinging.com/wp-content/uploads/2011/06/02-Pestilence-Shared-with-the-Worms.mp3|titles=Detrimentum – Pestilence Shared with the Worms]

Now, here’s a ReverbNation widget with two more songs from the album — and my, my, they are fucking fine ones, too.

I’m afraid I don’t have any good advice about how to get this album yet, because Detrimentum haven’t yet finalized release plans.

From the standpoint of a band, I don’t know whether finding a friendly record label is a blessing or a curse. From the standpoint of consumers, it’s usually a good thing, because it aids in spreading a band’s music farther and wider. Detrimentum happens to be looking for a label to release this stupendous album — so if you’d like to see it become widely available, then help ’em out by showing some on-line love for Detrimentum everywhere you can. They deserve it.

Here, we’ll help you out by providing every Detrimentum link we have, omitting only the on-line file at MI5: