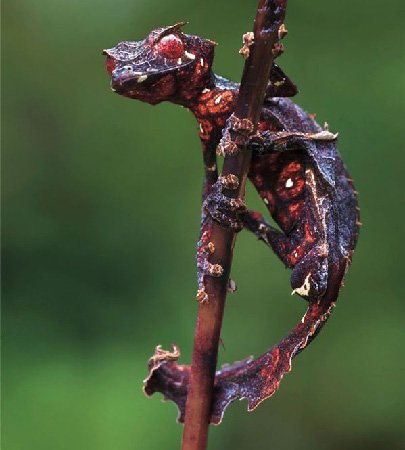 Yessir, it’s time for another installment in this series where we collect miscellaneous items that aren’t music but still make us think, “Fuck, that’s some metal shit right there!” Once again, we had help from a few of our readers, who will be duly credited by us (and perhaps blamed by you) for their contributions. We have quite a lot of killer items today, so let’s just just dive right in.

Our first item is really a series of items, all of which appeared in a feature at Cracked.com called “8 Real Photographs That Prove Hell Exists On Earth” (credit/blame to our reader Black Shuck who pointed us to this feature). Not only are all the photos metal as fuck, but the accompanying descriptions are also funny as shit. For example, here’s the narrative accompanying the photo at the top of this post:

“If doves are the messengers of the Lord, then the Satanic Leaf Tailed Gecko is probably Old Scratch’s preferred postal carrier. Though you should know that these guys are utterly harmless. They’re tiny — usually two to five inches long — and are endemic to the little island of Madagascar. So you’re not likely to stumble across one in the first place, and it certainly won’t hurt you if you do.

“It won’t hurt you at all. It needs you.

“It might ask you to hurt others, though. Oh, softly enough at first, in half-heard whispers borne on the wind, but they will grow louder, more frequent and more insistent — until one day you wake up to find yourself in a bathtub filled with liquid that used to be your family. And what will the Satanic Leaf Tailed Gecko do? Why, just take a gander at that picture again: It will smile, friends. It will smile.”

(more after the jump)

Here are a few more un-doctored photos from that Cracked montage: 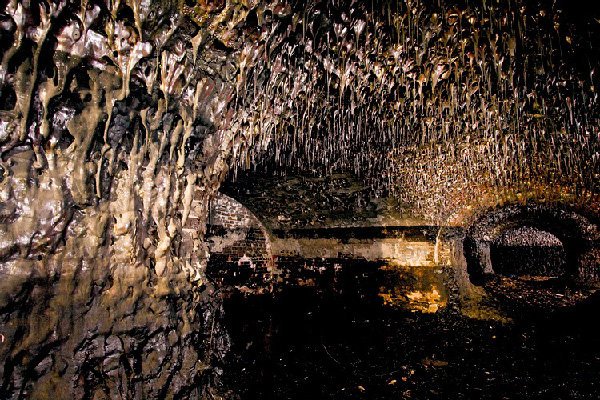 In a place called Fort Zverev, the Russian military stored  a napalm-like substance that, when ignited, would burn at temperatures over 2000 degrees. Wouldn’t you know it, in the 1970s, the storage facility caught fire. The resulting inferno burned so hot that it melted the bricks of the walls and ceiling so that they ran down like icicles. That’s definitely metal, of the molten kind. 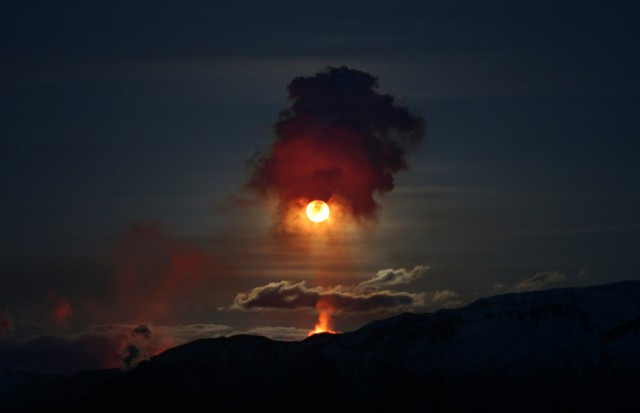 This is a photo of a volcanic eruption at “Fimmvorduhals” in Iceland. It really does look like part of Ragnarok. And Ragnarok, of course, is very metal. 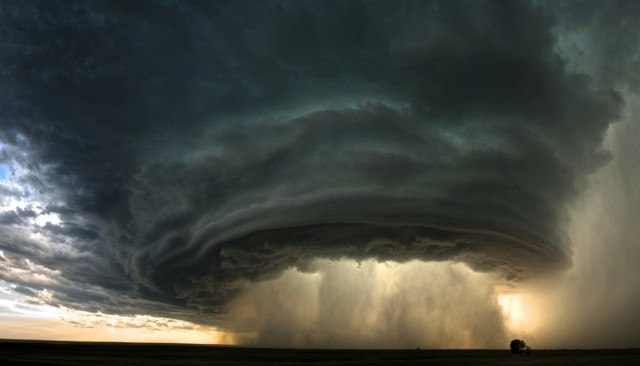 The photo above didn’t come from the Cracked.com feature, though it definitely would have fit in just fine. I found it instead at Boston.com. It’s a photo of a supercell thunderstorm rolling across a Montana prairie at sunset. This thing is so fuckin’ scary I nearly wet myself just looking at the picture. Shee-it.

Speaking of natural weather phenomena that just make you want to curl up like a little girl and whimper — and that also put you in mind of Ragnarok — here we have a time-lapse video of a giant dust storm that took just 2 hours to cover the city of Phoenix, Arizona, earlier this month. According to Phoenix’s National Weather Forecast Office, the cloud reached a maximum height of 1500 to 1800 metres, with its leading edge spanning 160 kilometres and racing forward at 64 kilometres per hour. Fuck me. (Credit/blame to our buddy Phro for the link to this piece of creepiness.)

Okay, this next video is just fuckin’ nuts. Three dudes with helmet-cams taking their mountain bikes down the spine of some godforsaken ridge in southern Utah. There are two parts to this video, and the second part is even more heart-in-your-throat than the first part. This is so fuckin’ metal, I had to go lie down for a while after I saw it. (Credit/blame to TYWKIWDBI for this one.)

Our final two items are about lighting. This seemed timely since Democrats and Republicans in the U.S. House and Senate currently appear to be locked in a death-struggle over — wait for it — whether to repeal a law passed during the Bush Administration that would phase out old incandescent bulbs over three years, starting with 100-watt bulbs next Jan. 1, in favor of more efficient lighting.

If we really want to save on consumption of energy, we might give some thought to this ingenious invention being implemented in The Phillipines. Now THIS is metal. (Credit/blame again goes to TYWKIWDBI.)

While we’re on the subject of lighting and light bulbs, I came across this bizarre piece of news. There’s probably an explanation for this, though an engineer would have to destroy the “miracle” in order to find the answer. So, pleasantly, we’ll just have to continue living with something that will remain . . . a mystery.

On June 18, the oldest-known working light bulb in the world will celebrate the 110th year it has burned bright. The bulb, which hangs idly about in a fire station in Livermore, California, holds the Guinness World Record.

However, it’s not clear how this particular bulb has been glowing since it was installed in 1901. Lynn Owens, who is in charge of the light bulb centennial committee, says, “Nobody knows how it’s possible. It is a 60-watt bulb and it’s only turned on for about four watts, but nobody knows why it keeps burning… We’ve had scientists from all over the country look at this light bulb.”

Not that the bulb’s shiny record is perfect. It has endured some initial glitches in 1901, a fraught week in 1937 and some random power outages all the way up to 1970s. Originally donated to the fire station, the bulb was actually designed by Adolphe Chailet, who – get this – originally competed with Thomas Edison to make the best light bulb in town.

For more info about this light bulb, go here.

That’s all we’ve got for this edition of THAT’S METAL! Enjoy the rest of your fucking day. Please.