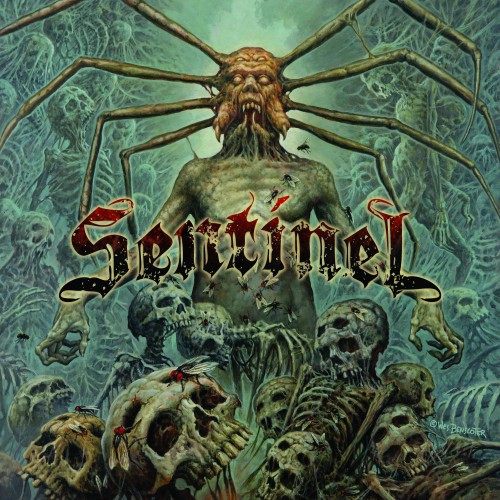 Back in mid-February we wrote about a hellaciously good Massachusetts metal band called Sentinel, who we’d come across in one of our MISCELLANY posts. Back then, the band had only produced two songs for public consumption, but they were really impressive — a fusion (as we wrote then) of “no-holds-barred speed, technical complexity, ass-on-fire vocal delivery, djent-style bass execution, and a successful combination of deep groove and head-exploding mayhem.”

Early last week, we found out that Sentinel had released a new five-song EP. I’d intended to put up a quick post about it on Wednesday, but as I got into the songs I realized that I’d need more time to do it justice. But before getting to the music, is that cover art an eye-puncturing bit of awesomeness or what? It’s by Wes Benscoter (Slayer, Dio, Sabbath, Hypocrisy, Cattle Decapitation, Mortician, etc.), courtesy of a contest selection by Revolver magazine’s editor-in-chief based on those first two Sentinel songs.

With artwork like that plus the hugely promising debut songs, I had high expectations for the new EP — and guess what? It does not disappoint. The music is a genre-bending avalanche of technically impressive metal extremity that will rivet your attention from start to finish. And to add icing to the cake, Sentinel have made the EP available for download at Bandcamp with a “name your price” option.

After the jump, we’ve got a few more words about the EP, plus a stream of one of the five songs, plus the Bandcamp link.

The last time I got this excited about a new Bay State metal band was when Revocation released Existence Is Futile back in 2009. As in the case of Revocation, Sentinel’s music is difficult to classify. It braids together elements of thrash, technical death metal, and black metal to create something that sounds vibrantly original. Like Revocation, the band’s sound is built around blazingly impressive guitar riffs and solos, but really, every member of this band turns in instrumental performances that bring down the house. 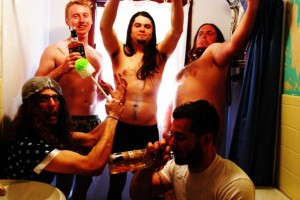 The instrumental opening track, “Monument”, launches with a disconcerting rush of swarming noise followed by a blackened, staccato assault of morbid tremolo chords, thundering bass, and blasting drums. It functions as a “wake-the-fuck-up” clarion call to what follows.

And what follows is “Human; No More”. The song ratchets up the intensity level with a hard-charging explosion of technical death metal, blackened by the tremolo-grinding and blast beats that accompany the pummeling double-bass and heavy rhythmic grooves. The dual-guitar riffing that unfolds as the song progresses is technically striking, and the white-hot vocals are uncompromisingly face-melting.

The band shift gears with “Reckless Peasant”, a thrash-style head-snapper with an intermittent rock beat, eye-popping guitar and bass leads, more vein-bursting vocal eruptions, and a two-part, fleet-fingered guitar solo that will put a big fuckin smile on your face. This is one sweet combo of groove and techy flash.

The next track, “Among the Flies”, is one of the two songs we heard in February. It’s another jet-fueled piece of sonic mayhem with a brilliant guitar solo and more technically impressive instrumental work throughout.

The closer, “Locust Cult”, is the EP’s longest track, at almost 7 minutes. It smashes from the outset with a prominent bass line, rumbling drums, and a wall of guitar noise before leaping into a tempo-shifting, head-bashing, extended instrumental intro. The rest of the song follows suit with a mix of downtuned grinding riffage and jittery, leaping guitar leads. The vocals roar, shriek, and growl, full of passion and venom. We get yet another blinding guitar solo and then, with about a minute and a half left, the tempo drops and the song becomes an old-school death-metal stomp (though still lit up from within by plenty of technical flash).

Every song on Sentinel’s EP is a winner, and we highly recommend you grab it now and get familiar with this band, because you will be hearing more about them in the future. Here’s a taste — the EP’s second track, “Human; No More”:

The EP was produced and engineered by Shane Frisby (Cannae) at The Brick Hithouse Studios, and it sounds fantastic. You can stream the rest of the songs on the EP and download it by accessing Sentinel’s Bandcamp page via THIS LINK.

The band tells us that they’ll have CD pressings ready for distribution in a couple of weeks, and they’re planning to film a music video for one of the new songs this summer, working with Bonfire Films (who made the new “Upload Complete” video for Last Chance to Reason).

To keep track of these developments and other Sentinel news, you can check them out on Facebook here.