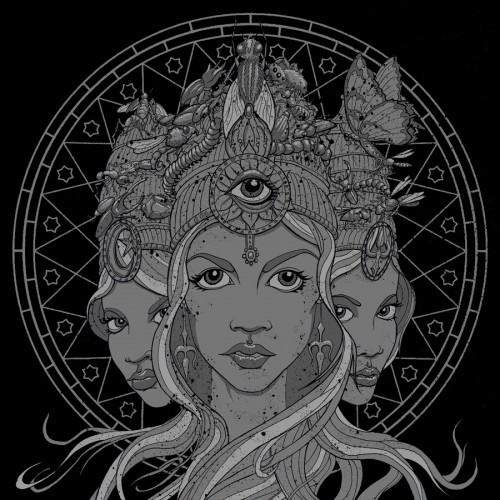 This is the third time we’ve written about Vancouver’s Burning Ghats. Previously, we reviewed their initial three-song demo last July (here), and then we reviewed their first EP — Fool’s Gold — last September (here). Now, the band have a second EP scheduled for release on August 2. It’s called Different Names for the Same Face. As in the case of the band’s first two releases, it features eye-catching artwork by the band’s bassist, Cam Strudwick (only half of which is visible up above — we’ll show you the rest later).

I had to think carefully about where and how to listen to this new EP. The first time I cranked up the volume on Fool’s Gold, it took me hours to get my cat down off the ceiling, I found a hole in the wall curiously shaped like my head, and I’d busted up a bunch of furniture but didn’t remember doing it. On the plus side, the music killed all the insects in my house and left them liquified in a pool of their own guts.

This time I decided to take precautions and just listened to the EP’s five songs through headphones. While tied to a chair. With a piece of rawhide between my teeth so I wouldn’t bite my tongue off. Actually, I couldn’t find a piece of rawhide, so I just used one of my cat’s chew-toys. I made it all the way through the EP without damaging any more furniture, except for the chair. I did bite through the chew toy. I’m pretty sure I swallowed part of it. My cat is pissed.

After the jump, I’ll try to explain the experience. And guess what? We also have the pleasure of premiering the EP’s first song for your listening pleasure — though we take no responsibility for any injury that may occur to your person, property, or pets. 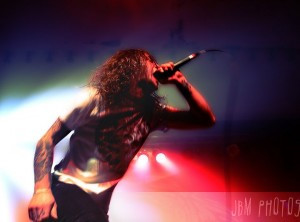 On Different Names for the Same Face, Burning Ghats brings to bear the heedless abandon of grind, but this isn’t just a spewing firehose of rampant noise. The songs are built around distorted, crusty, punk-ish guitar chords — a cavalcade of righteous, fast-moving riffs that will get your head snapping. The fleet-fingered bass rhythms and smashing drum attack keep things organized while at the same time contributing to the feeling of mayhem.

The raving, gut-busting, gagging vocals won’t appeal to everyone. Most of the time they sound like a man being strangled with his own intestines, but determined to vent his fury down to the last breath. The rest of the time, it’s the sound of someone who’s just been dowsed in napalm.

My favorite track is the last one — “Copacetic Deadbeat”. The band ease back on the tempo for most of this song before ramping up for a screaming finish. It’s loaded with heavy-as-fuck bass-crunching and body-slamming, chug-heavy rhythms, but there’s also fast, technical guitar riffing in the mix and a nice little bit of channel-switching.

With Different Names for the Same Face, Burning Ghats have delivered an infectious blend of crust-punk and grind that will get your ass up and moving. It may also induce seizures and lead to property damage. But we recommend you check it out anyway. To give you a taste of what’s to come, we’re pleased to debut a song from the EP called “Empty Spaces”:

Burning Ghats are releasing Different Names for the Same Face on 7″ vinyl beginning August 2, and we understand that at some point today, the band will begin accepting pre-orders via the Burning Ghats Bandcamp page (HERE), where you can also download the Fool’s Gold EP using a “name your price” option. Now, check out the full album art by Cam Strudwick: 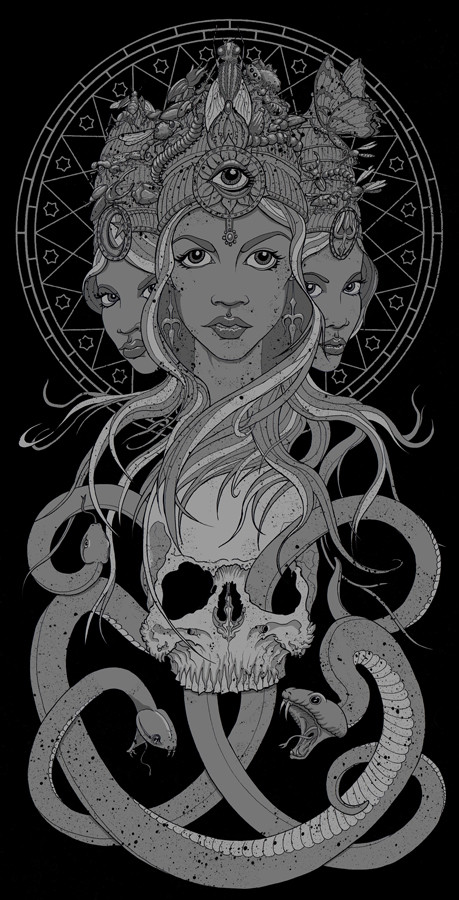