(NCS writer Israel Flanders delivers a review of the latest release from Bloodsoaked, beginning with this…)

Yeah.  Bow down.  It’s time for the new Bloodsoaked album The Death Of Hope.

Bloodsoaked is a one-man death metal project who’s put out two albums before this one.  If you are at all familiar with Peter Hassalbrack, then you know what to expect: Crushing, old school, grimy death metal that maintains a FINE balance of trudge and speed.  The first thing you will notice right away, however, is that the man has changed his vocal style from his forceful gutturals of the past to a more old-school rasp that really suits what’s going on here.

The album opens with the imperial trudging might of “Lies”, with a slam that’s got the heft of a mammoth.  Peter here works THE EXACT SAME MELODY for two minutes, spinning variations of the riff and managing to keep it interesting the entire time.  Really badass stuff.

Next is “Forever Damned”, which is an under-2-minute onslaught of blast beats and sharp tremolo riffing that hits with flesh-ripping ferocity.  “Infestation” strikes with a furious blasting assault until it transitions into an ABSOLUTLEY DEVASTATING groove that should make you bust your head on the nearest hard surface.  The verse of this song reminds me a lot of Human-era Death.  A welcome influence to be heard.  I like how the song switches between the mid-paced verse riff and the behemoth-sized slamming groove established at the beginning.  Gives it a nice jarring feel, and LOTS of that technical blast-beat action cuts through your skull like a buzz-saw from hell itself. (more after the jump, including a full album stream . . .) 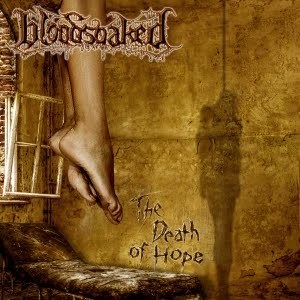 You’ve already heard “No God”, with its plodding verse riff and blazing speed-filled chorus.  That solo whoops some ass, too.

“Consume The Flesh” brings in more of that plodding brutality business and has a nice, dank feel to it.  I love the darkness of this dude’s riffs, and also the Neanderthal level of simplicity.  This is straight-for-the-jugular shit that I long for often, but don’t see in modern death metal.  An intense explosion of chaos later in the song furnishes some dynamics that pull you back in just as the plodding feel might be starting to wear on you.  After a ripping solo, the music moves right back into the grooving to fade out nicely.

The title track continues in the same lumbering vein, but with some very sinister sounding riffage.  “Mauled” returns to an assault that reminds me of old-school Morbid Angel in the best way.  The riff (and chorus) starting at 0:37 is just straight-up fucking class action that deserves to be noticed.

There’s more to the album, but you should get the point by now: This thing kicks ass.

The production on The Death of Hope is very clean.  The guitar tone has that meaty, metallic, Pestilence Resurrection Macabre-thing going on that I love to death. The bass is right in the pocket, in just the right place in the mix, supplying what beef may be missing from the guitar sound.  The drums are clear, tight, and evenly mixed.  Whether this is a drum machine I can’t say, since while Peter tours completely solo, HE DOES have an official drummer he writes with.

This is brutal.  This is death.  This is a hefty sledgehammer of old school.  This is Bloodsoaked.  Allow me to play you out WITH A FULL ALBUM STREAM provided by Peter himself.

To follow the escapades of Mr. Hasselbrack in his Bloodsoaked persona, visit this Facebook page. The Death of Hope is out now and can be ordered from Comatose Music at this location.

7 Responses to “BLOODSOAKED: “THE DEATH OF HOPE””